Smaller Side of the Maldives

Smaller Side of The Maldives 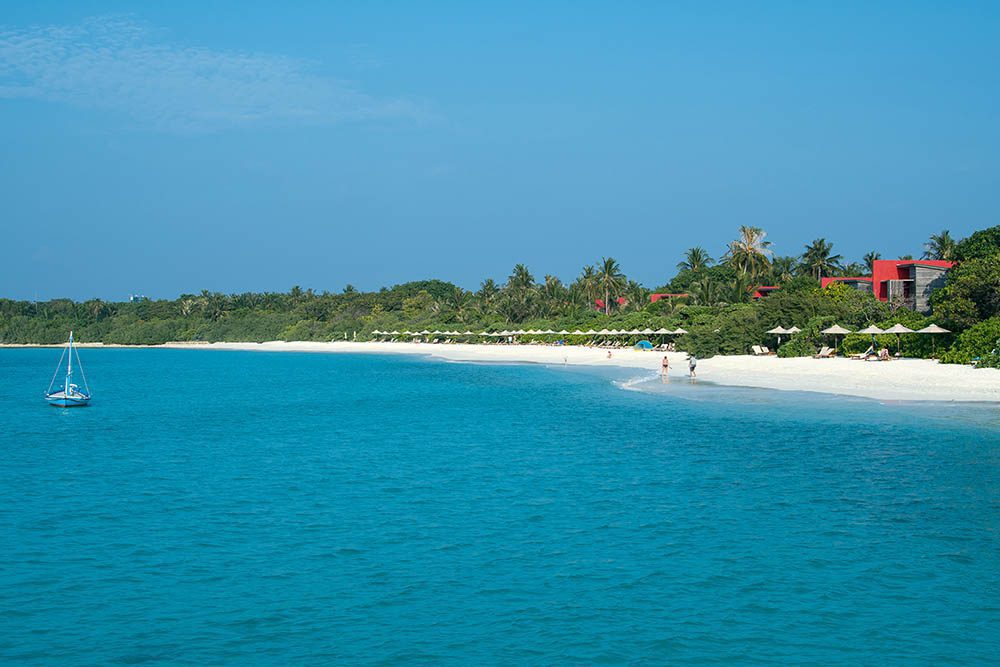 “THEY CAME AND TOOK EVERYTHING.” Divers have been known to use hyperbole – this big, so deep, that many – so I was going to take this with a degree of scepticism.

“This was the last place in the Maldives to be properly policed for illegal foreign fishing,” my dive-guide continued. “All the sharks and rays were taken – but now they’re coming back, juvenile sharks and mantas.”

Several dives into my trip, it seemed that his explanation was adding up. When divers talk about the Maldives, it’s often about the excitement of close encounters with outsize pelagics. So how had I ended up in one of the few places that didn’t appear to have any?

The Barefoot Eco Hotel sits on the island of Hanimaadho in Haa Dhaalu Atoll in the far north, just below the Eight Degree Channel that separates the Maldives and India’s Lakshadweep islands.

Designed around a Balinese longhouse, the hotel fits sympathetically into the landscape. It also ticks an impressive number of eco boxes, including producing its own power via solar panels, having a conservation centre and bottling its own water (in reusable glass bottles). The small dive-centre runs up to three dives a day, and all sites are within an hour’s dhoni ride.

It’s not a gilded-bubble resort but located on a “local island”, a rather surreal differentiation to have to make when travelling to another country.

With a town, a school and an airstrip, Hanimaadho offers a small but intriguing insight into Maldivian island life.

One consequence of this is that alcohol is forbidden on the island, so those important après-dive refreshments are catered for on a boat-bar a five-minute free water-taxi ride away.

Our first dives were both around Baarah, a fringing reef surrounding

a small island. When we arrived, our guide Paolo was quickly into the water, checking the current and reporting that it was going in the opposite direction to normal.

As we entered and descended, it soon became clear that the visibility was not great, at about 10m, the overcast sky and the water thick with nutrients soaking all colour from the reef below.

Stopping just above the reef to pass the obligatory signals round the group, I took the opportunity to unfurl my strobe-arms. As is often the case, I was the last to realise that we had now gained an extra member – a hawksbill turtle sat nonchalantly on a rocky outcrop, watching the formal beginnings of our dive.

It was for perhaps only two minutes that we huddled round to investigate, and soon the turtle had decided that enough was enough, and moved away.

The slight current gave us the impetus to continue the dive. As we moved past the reef, shoals of snapper intermingled with surgeonfish busying themselves in their morning routines. Below, a marbled ray drifted along where the reef met the sandy bottom at 30m.

THE NEXT DAY’S Filladhoo shipwreck was a different proposition altogether. The sky was clear, and when Paolo climbed back on board after checking the current it was running in the expected direction, and from the surface you could see that visibility was excellent. We were in for a fantastic dive.

The wreck has been partly absorbed into the reef but acts as a perfect hide-out for all types of marine life. Snapper, trevally and parrotfish congregate and cloud the wreck. Much like an established human dwelling, the wreck felt lived in. 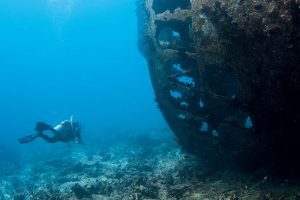 The vessel’s real name was Captain Pentails, and in her life afloat she was a 3000-ton freighter before sinking in 1963. The bow has all but vanished, smashed flat by successive storms, but the stern is still intact and rises from the bottom, leaving the remains of the funnels protruding from the surface.

Sheltered from the current, we were easily able to swim around the stern, inspecting the remains of a propeller jutting out of the hull.

Compared to many areas of the Maldives, the currents around Hanimaadho were generally light, so we had no need for current-hooks, but all our dives were still conducted as drifts.

My newly qualified buddy found the diving easy, and significantly more rewarding than it had been in the wintry UK lake where she had trained several weeks previously….

The next morning we were sitting on the forecastle of the dhoni as Paolo briefed us on the dive ahead. Finey Thila, he was confident, was the best site in the area – a raised reef covered in soft coral. It would be harder to find, however.

Within sight of a small island but with no visual cues or transits to run off, we would rely on our Maldivian skipper’s know-how and a handheld GPS.

Whereas the dives to this point had been on largely rocky reefs, this site was covered in soft coral in pastel shades of pink, purple and yellow.

Following the reef wall, we crept into overhangs to find shoals of yellow sweeper and occasional lazing lionfish.

The soft coral swarmed with anthias, and huge patches of the reef were carpeted in anemones, with their lively occupants valiantly defending their patches. The visibility was again limited, but out in the blue could be spotted the occasional larger visitors: dogtooth tuna and barracuda.

Our final dive was a return to Baraah. It is one of the joys of diving that variations in conditions can dramatically alter the atmosphere and feel of a dive. Where before it had been gloomy and brooding, now it was bright, clear and energetic as excellent conditions in the sky and sea aligned.

As we drifted along the reef, I spotted a turtle again perched on a rocky outcrop, and headed towards it with camera at the ready. Playing a familiar photographic game, I gradually edged my camera forward, unsure whether to take the shot or try to get just that bit closer.

I’d spooked it! After an elegant about-turn the turtle moved away – but then followed along, roughly keeping pace with us for the rest of the dive. 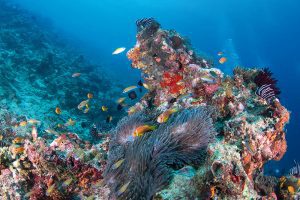 Anemonefish on the reef.

Pausing above the reef for the safety-stop, I spotted a young whitetip reef shark darting away. In my mind this helped endorse what I had been told; sharks were bouncing back, albeit only in the form of resident juveniles.

Divers were always going to be the first to be aware of the huge issue of plastic pollution in the ocean, and it was pleasing to see the efforts to which the resort went to combat it.

This matter is especially important in an island-nation where waste-disposal is a huge challenge; the highest point in the Maldives is purportedly the summit of a rubbish dump.

I don’t think I saw a single-use plastic bottle during our stay at the Barefoot Eco Hotel. Complimentary still and sparkling water came in those reusable glass bottles, and the hotel had recycling bins throughout.

It set a creditable example and, on the face of it, that eco label was well-earned.

The resort is low-key, relaxed and appears to have minimal environmental impact. The absence of underwater restaurants, endless jetties of water bungalows and the artifice of some resorts in the Maldives add to its charm.

This is reflected under water. The glitz and glamour of large pelagics might be lacking, but is made up for by easy diving and a memorably laid-back vibe.

GETTING THERE > Max flew to Male via Doha with Qatar Airways and took a 45-minute internal flight to Hanimaadho with Maldivian Airways.

WHEN TO GO > Year-round.

CURRENCY > The hotel operates in US dollars but accepts euros.

PRICES > One week full-board including flights and transfers costs £1950 with Scuba Travel, scubatravel.com. You cannot pre-book diving at the resort but pay US $60 per dive, and nitrox is free.