19th-century Dutch steamer the Castor was carrying crates of antiquities when it sank in the English Channel in 1894, but are there more statues awaiting recovery? STEFAN PANIS, who returned to the wreck this summer, reckons it’s a classic 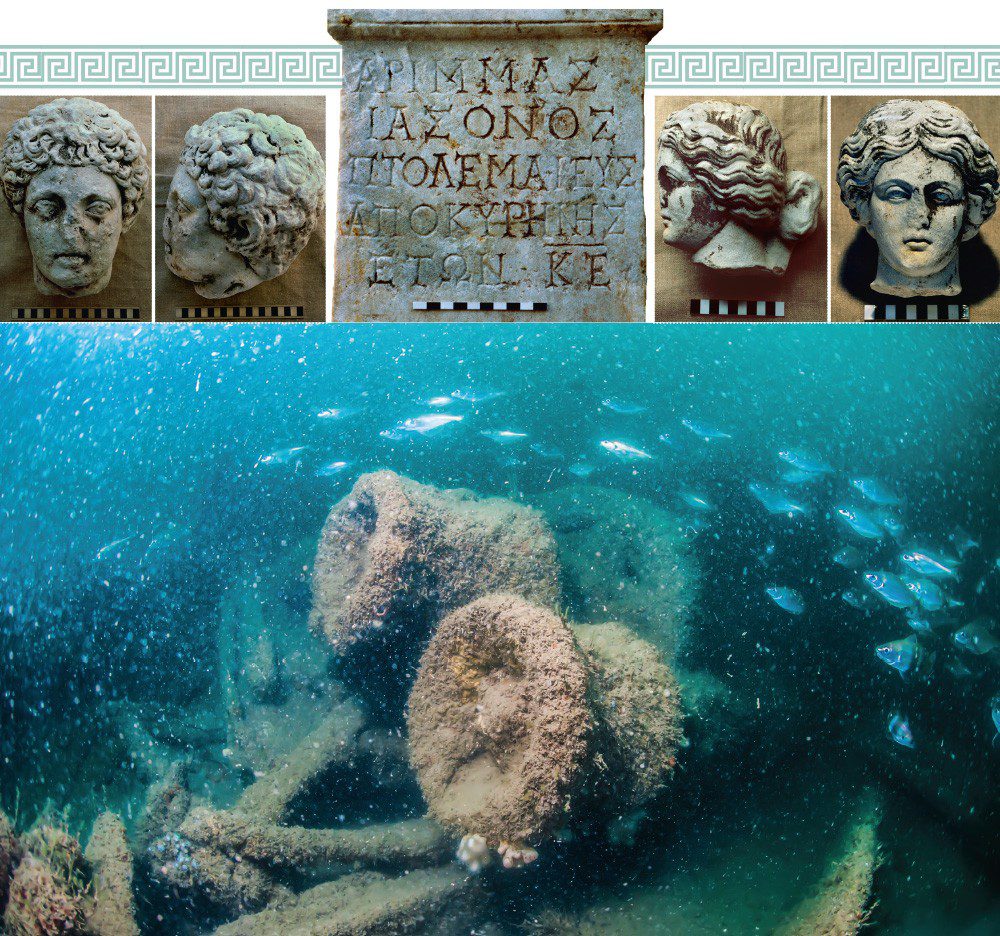 Top: Marble heads, dated c140-150 AD, with a marble early Roman funerary monument with Greek inscription from the first century AD, all found on the Castor wreck. Above: Bow winches.

WHILE RESEARCHING in the archives over the years, on several occasions I have accidentally stumbled on interesting shipwreck stories.

One such was that of the Dutch steamer Castor, a wreck that at once shot high onto my wish-list of “to do” wrecks.

In 2015 I invited wreck-hunter Selçuk Kolay from Turkey to speak at an international dive show I had organised. He had heard about the Castor story, and through his contacts I gained some more valuable details for my investigation.

Then, while out in the Channel last summer, we were forced by bad weather to dive the relatively protected Dungeness area, and decided very quickly to use the opportunity to dive the Castor. I was finally about to see this wreck. 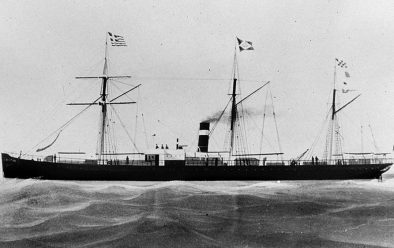 Castor was built in 1870 in Glasgow for Koninklijke Nederlandse Stoomboot Maatschappij (KNSM) in the Netherlands. She was a screw-driven vessel with a two-cylinder compound engine, was 77m long and displaced 1360 tonnes.

In 1873 the ship was chartered by the Holland Amerika Line to take passengers across the Atlantic to America. She made 12 return voyages to New York, the last one in 1883, when she returned to operate on Mediterranean routes, carrying general cargo to Amsterdam, often from Turkey.

Dutch consul Van Lennep also traded in antiquities, and dispatched many items to European museums using KNSM. One of his clients was the Rijksmuseum in Leiden in the Netherlands, and Van Lennep helped to build its collection of Greco-Roman items.

In 1894, 14 such sculptures and inscriptions were packed into two crates and shipped from the Turkish port of Smyrna (now Izmir) aboard the Castor.

Unfortunately, they never made it to the Netherlands. Captain JR Visser passed Dungeness on 28 July in dense fog and collided with the German barque Ernst.

Struck amidships, Castor sank, but all 25 of her crew and passengers were saved and brought ashore.

No attempts were made at salvage, and the Castor remained, along with her cargo, on the seabed for the next 80 years.

ON ONE OF MY FIRST trips to Dover, my friend Eddie Huzzey put me in touch with Colin Whyte, one of the BSAC Folkestone 501 divers who had discovered the wreck-site in 1985.

They had gone out to dive an unknown steamship, and subsequently brought up some of the marble cargo.

Eventually the marbles were taken to the Canterbury Archaeological Thrust for identification, and declared to the Receiver of Wreck. Research finally led to the story of Van Lennep and the Castor.

On later dives, the divers recovered some china plates bearing the KNSM monogram, proving the identity of the ship.

Research of Van Lennep’s correspondence, preserved in Leiden Museum, revealed a letter containing a detailed listing of the antiquities.

The two crates recovered from the wreck were, it seemed, the less important items to him, because another crate containing a complete statue was described by the collector as “stunning!” This and another case still awaits discovery.

While steaming out to the dive-site, my thoughts were with Van Lennep and the two remaining cases. I was also considering the possibility that the consignment bound for Leiden Museum had not been the only one, and that there could be more down there.

I grew nervous with anticipation.

When I landed on the wreck, which lies in about 30m, I could see Tony Goodfellow through the rotting decking inside a hold.

It seemed that we had hooked into the stern section of the wreck, which was still standing about 6m tall.

As the hull is deteriorating, I could easily penetrate the stern, and Tony showed me boxes full of knicker bottles (the ones with ball stoppers in) that were lying around.

The wreck-site was covered with a light silt, and if I stopped visibility was immediately reduced to zero. I backed out, and continued my dive towards the bow.

Around midships, I noticed the twin-cylinder compound engine which, surrounded as it was by fish, was a beautiful sight. A little further on I saw the remains of the bridge, and a set of boulders in front of it making a nice frame through which to take a shot.

PAUL WILKIN, WHO WAS rummaging around in this area, signalled to me. He showed me a beautiful silver teapot that he had found in one of the ship’s sinks.

Later cleaning and conservation would reveal that it bore the ship’s crest, and the item was declared to the Receiver of Wreck. 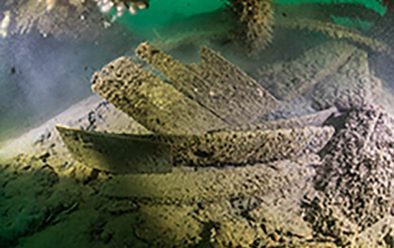 I moved on and came to the holds just before the bow, where the crates containing the marbles must have been located.

I looked carefully for any indications of wood or marble, but unfortunately found nothing significant.

Just before the bow was a spare anchor, a beautiful model, and another one lay beside the wreck on the silty bottom.

On the bow some of the superstructure was still standing, making it possible to take a look inside. After experiencing another silt-out, however, I decided it was time to head back.

Finning on the other side of the deck, I found that the davits were still there. I remembered them from the old pictures I had seen of the ship. Than I came across a row of dead-eyes, a spooky sight!

I surfaced still smiling after this exciting dive, feeling the privilege of visiting such a fantastic site filled with history and suspense.

COLIN WHYTE FROM BSAC Folkestone 501 told me that all the marbles found by the early-day divers had been returned to Turkish ambassador Ozdem Sanberk as the result of collaboration between the UK and Turkish governments.

The British Museum had estimated their value at £25,000, and the divers had received a salvage award from the Turkish authorities through the Receiver of Wreck.

The marbles are now displayed in the Anatolian Civilisations Museum in Ankara.

The remaining treasure is unaccounted for, in particular a statue of Nysa that Van Lennep mentioned in his letter to Leiden Museum.

In June this year we organised a Dover Wrexpedition, involving an international team of divers from the UK, USA, Italy and Belgium. Once again weather and visibility “forced us” to dive the Castor, and it didn’t disappoint. After briefing the guys on the story of the ship, they were all eager to go first!

Descending to the wreck, I noticed that Brian Robinson and skipper Dave Batchelor of the Neptune had made a good call in diving this site, because the visibility was the best we had experienced all week.

I saw that my Italian friend Edoardo Pavia had swum his line towards the bow, and decided to follow it. Everywhere the ship’s details and fittings were lying around, like the beautiful winches, where buddy Kenneth Dupont paused for a while to pose for me. 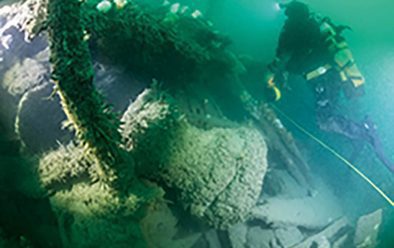 Capstan fallen through the deck down into the hold.

In the hold just in front of the bow I spotted a big capstan that had fallen through the rotten deck. In the bow section, still quite well-preserved, I saw Edoardo and Eddie dropping into the holds to take a look inside.

The visibility was getting stirred up, so I decided to head for the stern section. The tide had dropped and visibility was even better than before, making it possible to see the entire engine, a great sight.

In another hold I saw the remains of wooden planks, and I must admit that my heart skipped a few beats. I investigated the contents, but unfortunately it was only bottles.

The tide turned and the current picked up, so I saluted our American friends, who were still investigating the stern, and headed back to the surface.

We didn’t found the Nysa statue, but we were all in agreement that this was another amazing Channel dive.