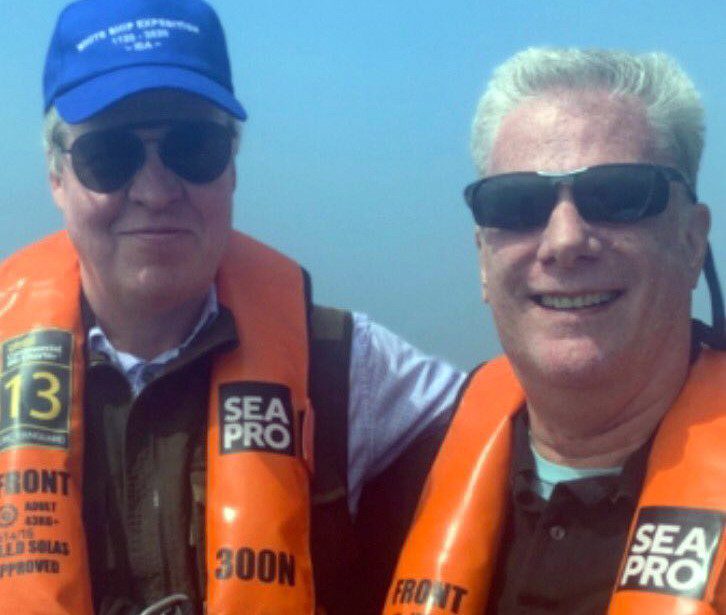 Earl Spencer and Roger Michel on the dive-boat.

The timber longboat known as the White Ship sank off Normandy 900 years ago, drowning the heir to the English throne and hundreds of nobles. Scuba divers who had been hoping to locate the wreck have now reported finding far more than the scattered remnants they had hoped for.

Exploring the 10m-deep suspected wreck-site in strong currents on 8 June, they found what could turn out to be “a significant section” of the 40m hull, according to expedition leader Roger Michel, executive director of the Institute for Digital Archaeology.

Michel told the Daily Telegraph that historian and expedition supporter Charles, the 9th Earl Spencer, had calculated how long the ship must have rested on the submerged Quilleboeuf Rock before sinking. Based on this information, the team had analysed local currents to work out the likely location of the ship’s debris field.

Giles Richardson and Holger Shuhmann carried out a one-hour dive, restricting themselves to photographing the site because they were not permitted to remove any finds.

“The divers found a section of the hull built from exactly the materials we were looking for – iron and bronze, wooden nails and so on – exactly where we thought we would find them,” said Michel. He reported that the section was at least 4m long, though more was thought to be concealed by a boulder.

“We can see that it has the correct design features for a ship of this age, and there are no other recorded shipwrecks in the area,” he said.

Originally planned for last December, the expedition had been called off at that time because of poor weather. Earl Spencer had been hoping to dive this month until a frozen shoulder ruled this out. His book The White Ship was published in paperback two days after the discovery.

Resembling a Viking longship, the White Ship was one of the biggest such vessels ever constructed. It was clinker-built, meaning that the oak hull planks overlapped each other, and propelled by 50 oarsmen.

The ship was only a mile out from the port of Barfleur at around midnight on 25 November, 1120, when it struck the rocks at full speed.

Aboard were some 300 people including many members of the Anglo-Norman nobility, celebrating victory over the French after four years of war with copious amounts of wine. They were eager to race King Henry I, who had already departed on his own ship, back to Southampton.

All but one of those aboard died, including the king’s only male heir 17-year-old William Aetheling and his sister Matilda la Perche. A French butcher who had boarded to try to recover debts was the sole survivor and provided an eye-witness account of the disaster.

The sinking altered the course of English history. Henry was the son of William the Conqueror, and after his death civil war broke out between his appointed successor, another daughter also named Matilda, and his nephew Stephen of Blois.

This conflict, “the Anarchy”, continued for 20 years until Matilda’s son took the throne in 1135 as Henry II.