Back in 1988, Oceanic launched a remarkable air-integrated dive-computer, the Datamaster. Computer design has been an area in which Oceanic has excelled. In fact subsidiary Pelagic Pressure Systems was created specifically to research, design and manufacture computers for Oceanic – and for many other scuba equipment brands that lacked the in-house resources to make their own.

The Oceanic ProPlus 4.0 carries the legacy of the Datamaster concept, but updated to integrate with the latest recreational and entry-level tech-diving techniques and smart technology. And, it seems, as with the Datamaster, Oceanic’s designers are ageing too, because they’ve built in really large displays for the middle-aged.

So who better to test the ProPlus 4.0 in the field than someone as blind as a bat, on whom good vis is wasted and who, when I dive with dolphins, imagines he hears them sarcastically whistling: “Should have gone to sonarsavers…”

The ProPlus is a 100m-rated gas-integrated unit that can handle up to three air and nitrox mixes and has a Gauge mode. It’s chunky.

There are holes for a lanyard, so it can be clipped off to a D-ring. It’s attached to your first stage by a hose with a very effective quick-release bayonet connection, so can be fitted just before you dive to protect it from being knocked about in the tank-racks of a bouncing RIB, for example.

After the dive, you can take it away to upload your log or plan future dives, or to rinse and store it. A standard Oceanic floating card compass with side-reading window is optional – one was included with my test unit.

THE ProPlus doesn’t go in much for graphic displays. There’s one to indicate ascent rate and another for nitrogen absorption.

I didn’t miss the graphics, because I prefer to read information. I simply find it easier to take in, especially in the narcosis zone, where I tend to really concentrate on my read-outs.

The unit is highly customisable. A fundamental choice is which of two algorithms you favour. Oceanic was an early adopter of the DSAT algorithm developed in the late 1980s for the PADI RDP, though it has been somewhat modified for decompression diving, which the RDP did not allow.

The DSAT model provides more generous no-stop times, but will penalise you for deco-dives with longer stops or shorter subsequent no-stop times than the Z+. The Z+ uses more conservative no-stop limits but is less restrictive for deco exposures than DSAT’s schedule.

Oceanic points out that having these two programs should allow you to match your ProPlus to most other computer brands. This can be helpful if you want your dive-times to roughly match those of a buddy using a different make. It also offers flexibility when shifting from recreational diving to tech, which, with a change in training agency, might also mean changing to different deco conventions.

For additional peace of mind, you can choose various levels of conservatism, to make you feel happier (to be PC about it) if you are of mature years, genetically big-boned or both.

This is because being old affects your circulation and nitrogen loves fat. Both factors alter how nitrogen is absorbed and released, putting you outside the test criteria for dive-tables and computer algorithms and raising your risk of decompression illness.

Deep stops are another option, with an early-warning system to let you know that you’re approaching the stop level. Altitude is set automatically.

Then there’s a long list of choices such as whether you want imperial or metric displays and how long you want your backlight to stay on when activated and whether you want any of more than a dozen audible alarms to sing out or not. Once you’ve set these options, you’ll probably leave them alone.

Other alarms you might want to set on a dive-by-dive basis. A depth alarm can be useful when descending a wall, for example, when it’s easy to get carried away.

You can also set a timer to help you stick to a plan.

The gas-integration lets you program in a turn-around alarm based on tank pressure, which can serve as a reminder to let a divemaster know that you’ve used up, say, half your tank.

Backing this up is a secondary reserve alarm that can be set between 20 and 105 bar, to help you avoid running out of gas or arriving back on the boat with so little air left that you incur the DM’s wrath.

Yet another alarm can be selected to go off when you reach a certain percentage of your remaining no-stop time. It’s all good, safe stuff.

You can simulate dives on the surface to see the effect that changing depth, time or gas mix will have, with a simple planner that lets you see no-deco times for a selected depth. You can’t simulate decompression dives to see what hang-time you’ll incur ahead of the dive.

A comprehensive built-in log-book holds 99 dives – you can upload to Diverlog+ using Bluetooth. Oceanic has chosen to go with a user-changeable CR2 battery. A low-battery warning gives you plenty of time to make the switch, assuming that you have a spare.

For all its sophistication and multitude of features, this is a supremely easy machine to navigate. The simple two-button menu system quickly becomes intuitive. Each requires either a short or long press, depending on where you are in the menus, to locate, set and confirm a function or exit a menu. It doesn’t take much experience to get the hang of most of these.

The ProPlus uses air, but can also be set to allow you to switch from your main gas to two additional decompression mixes during ascent. 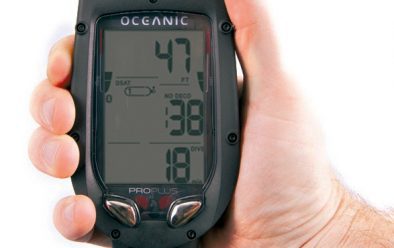 When you switch gases, the gas time remaining display is not operative, so you will see only a pressure read-out for the cylinder to which the ProPlus is attached. This is the downside to a hosed gas-integrated computer, compared to one that uses transmitters.

Transmitters can be fitted to multiple cylinders and continue to update gas-pressure and estimated duration to your computer when you begin breathing off each. But this type of diving is really the preserve of technical divers – the ProPlus is intended more, I would say, for beginner to advanced recreational divers.

When you change mixes, the gas-time remaining display is replaced by the logo SPG to remind you that the ProPlus is no longer hooked up to the cylinder from which you’re breathing.

Slip into decompression and the read-out is straightforward. Alongside an audible alarm going off, a red LED starts flashing.

Approaching and going into deco is where gas-integration becomes especially attractive to me. The ProPlus presents you with your total ascent time – the minimum time it will take to break surface safely if you maintain the optimum ascent rate and decompress at the prescribed ceiling. Alongside is the estimate of whether you have enough gas to do so.

I’m casual about going into, say, 20 minutes’ deco if I’m confident that I have sufficient air, and it’s this reassurance that a gas-integrated computer such as the ProPlus provides.

It calculates gas-time remaining based on how fast the cylinder pressure is falling, so it’s not necessary to program in your starting pressure and volume.

Within a few breaths, it has the data it needs. It can quickly react and reassess your remaining gas-time if you suddenly demand more air – by diving deep, swimming against current or sharing, for example.

Swim into a wreck or dive at night – and I did both – and a press of a button softly backlights the display. It’s brighter than my own computer and makes the ProPlus as easy to read in the dark as it is in bright sunlight in the shallows.

The display digits are huge enough for most buddies or supervisors to read from a distance. The read-out is logically presented, and easy to take in at a glance.

The visual alarms are unambiguous. For example, if you descend past a chosen depth, the depth display, set at 12.5m, continued to flash as I dropped deeper. Although I acknowledged it, it didn’t turn off.

I struggle to hear the audible alarms of most computers, and this one was no exception, though I did hear a time alarm kick in on a night-dive.

I was kneeling in an alcove taking pictures and barely breathing, so it was very quiet.

It’s hard to fault the ProPlus. It’s bulky, but that’s the trade-off for those big and well-spaced out easy-reading displays. Clip it to your BC with a retractor and you really won’t notice the size, and it won’t get in your way.

The ease with which you can assimilate all your key dive information is a winner, and the ProPlus’s comprehensive range of custom functions means it should be possible to set it to please most recreational divers.