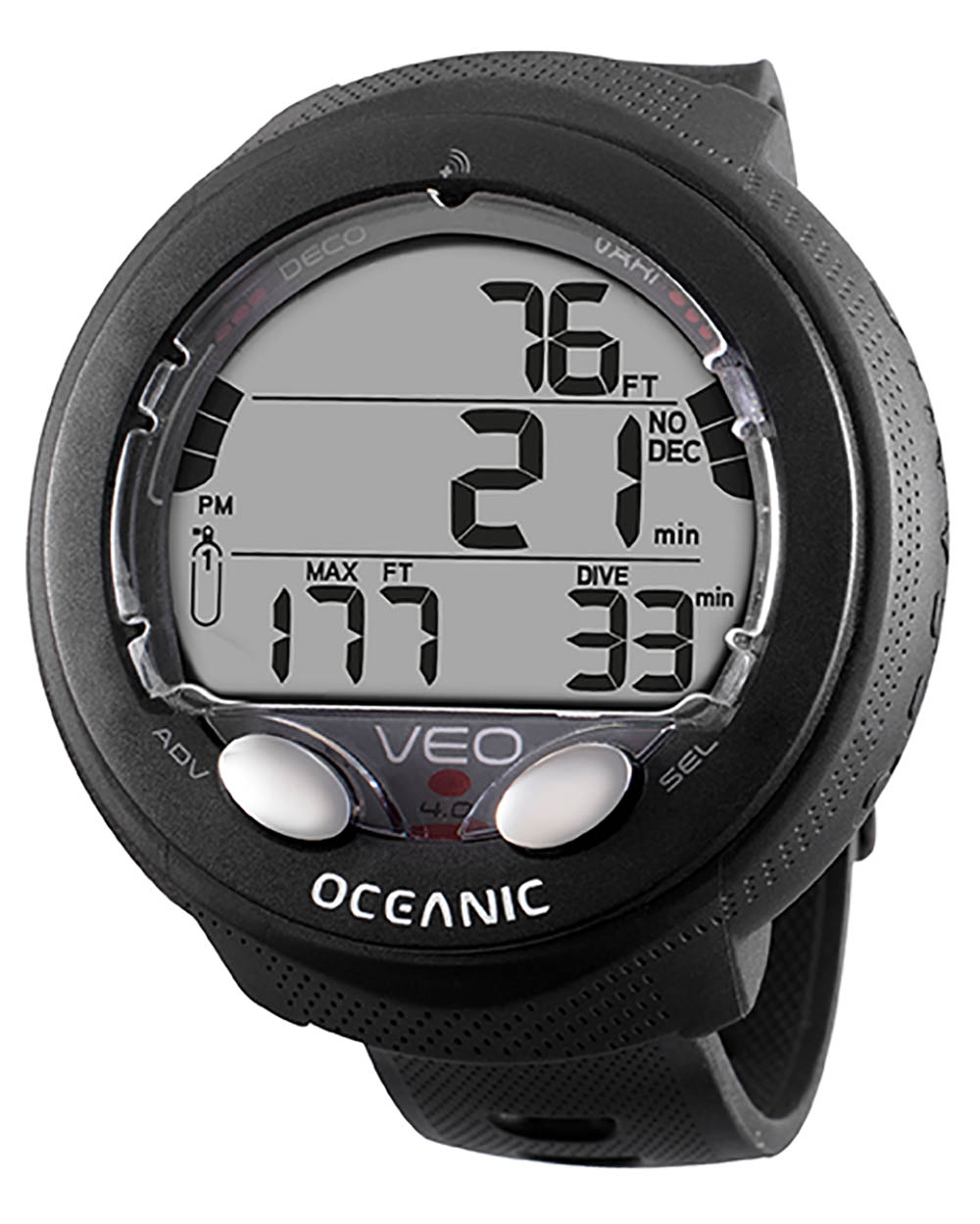 A few years ago, I owned an early Oceanic Veo computer. But not for long. Much as I liked it, someone else liked it more and stole it.

Two features I had much enjoyed were the easily read displays and, especially, the intuitive menu settings.

Oceanic describes the Veo 4.0 as entry-level, but this is a clear case of under-promising and, as my report confirms, over-delivering.

Oceanic has a lot of experience in dive-computer design, going back to the late 1980s. It set up a division, Pelagic Pressure Systems, to develop and manufacture diving instruments to be marketed by Oceanic or, in slightly modified form, under different names by other scuba brands.

The Veo 4.0 is a full-size rather than watch-style computer, allowing for large and well-presented information displays, ideal for equipment-testers in their mid-50s.

It isn’t gas-integrated, but shares many of the features and benefits of the Oceanic ProPlus 4.0, which I rated highly.

In this review, I’ll concentrate on the features of most importance to recreational scuba-divers: ability to compute and manage your air and nitrox dive-profiles automatically.

However, the Veo 4.0 also has comprehensive Gauge and Freediving modes, so is suitable for table-led technical dives or serious snorkelling no deeper than 100m.

The first of a choice of two algorithms long used in Oceanic computers was developed for PADI’s RDP by DSAT, and is now proven over more than three decades.

The RDP is a no-deco table but the algorithm used in the Veo uses extended half-times and other modifications to enable decompression diving.

The second algorithm is the Pelagic Z+ Buhlmann ZHL-16C. Using the DSAT model will allow for longer no-stop times than Buhlmann, but shortens repeat dives for the same surface interval.

The choice lets you match your Veo 4.0 no-stop and deco times to most other computers, so if your buddy depends on another popular brand you can probably obtain an exact or close match. It also provides for divers who expect to progress from rec to rec-tech.

The Veo is also well specified for such progression with its ability to handle one main air/nitrox mix plus the option to switch to two nitrox blends or 100% pure oxygen for deco.

You can choose to modify the algorithms by including deep stops or adding a caution zone. Altitude correction is set automatically.

A range of audible and visual alarms can be custom-set by the user. These include warnings on reaching a given maximum depth – a nice feature for wall-diving, for instance – and an elapsed-time alarm to remind you when you’re expected to begin surfacing to please your boat- or shore-cover.

Other warnings are automatic, unless you deliberately turn them off, such as entering decompression or switching to nitrox or oxygen at the wrong depth.

You get to program other functions, within sensible limits, such as maximum oxygen partial pressures, or safety-stop depth and duration.

The built-in backlight can be set to stay on for up to 10 seconds after pressing the button, giving you or a buddy time to assimilate read-outs in dark conditions. For rental use, the memory can be zeroed.

The simple dive-planner allows you to check no-decompression schedules for a given mix and depth, but you can’t run a simulated deco dive to see what stops you’ll incur if you go over them.

I have an HSE set limit of 20 minutes on stops for working dives and calculate my air based on this, then ascend when my total ascent time hits this deco limit. So for me the simple plan is workable.

The logbook functions are comprehensive and the Veo 4.0 is Bluetooth-enabled and can be linked to the free DiverLog+ app for uploading, as well as changing some of the Veo’s functions from your phone or downloading firmware upgrades.

When turned on, the Veo displays details of your last dive. Having once sent a friend to the chamber with my computer so that his profile could be checked, provided the attendant could figure out how to access the hidden logs, I welcomed its clarity.

The battery is a user-changeable CR2450 lithium cell.

I spent 10 hours over eight dives using the Veo 4.0, which is set using two buttons. Changing some functions requires either a short or long press, an approach I have never liked.

Using another make, I could never remember the right sequence to reset my nitrox mix after it timed out, once just as I was about to leap from the boat.

However, I found that almost all the Veo 4.0’s settings are selected and confirmed intuitively.

I hadn’t even realised that I was using the long presses until after my trip, when I was going through the Veo at my desk and looking at the manual while writing my report.

I mostly used nitrox on the Veo dives, and was pleased to find that I could quickly change the mix without needing a crib sheet.

It’s as easy to program in defaults you probably won’t adjust routinely, such as partial pressure, as it is to reset mixes or depth and time alerts that you might wish to change from dive to dive.

The information layout is bold, clear and uncluttered. I’m often testing masks and have to forego reading lenses, so if I can figure out a computer’s read-outs well enough to surface without the machine screaming: “Get back down, you’ve missed your stops!” I’m a happy bunny not to be going in the pot.

Two main graphic bar displays run up either side of the screen. Segments light up to show how much of your NDL has been used up or by how much you are exceeding your ascent rate.

A smaller graphic shows battery state. Everything else is shown digitally, which I prefer.

During a no-stop dive, it’s very easy to assimilate key information, such as remaining no-stop time and current depth, as well as elapsed dive-time, which might be necessary if you’ve agreed how long you’ll be down, typical of boat-diving.

You can also see your maximum reached depth and temperature – useful in my experience only for confirming that you really are as cold as you feel, or for making you feel superior in the tropics.

Once you reach your safety stop level, the Veo 4.0 begins counting down your time in minutes and seconds.

Enter decompression and the display is unambiguous. You’re shown your ceiling depth and total ascent time, so you can manage your gas supply appropriately.

If using additional deco mixes, you’ll be prompted to switch to these as you reach the correct depth. I didn’t test this function. I had flooded the battery chamber and written off my own computer that I use as a reference.

While I had a second test computer alongside, I didn’t feel I was familiar enough with either to feed in gas-mix misinformation just to see the change-mix displays during real deco dives!

Gas-switching with the Veo 4.0 can’t be simulated at the surface, but it looks straightforward.

The screen was easy to read in the sunlit shallows, where I was making safety or deco stops. At depth in poor light I could see well enough without using the backlight.

While I wasn’t able to do any night or wreck-penetration dives with the Veo, I had done both with the ProPlus and it was an easy read, so I’d expect the same of the Veo.

The Oceanic Veo 4.0 is a very capable computer for advanced recreational and entry-level rec-tech diving. It’s easy to set and easy to read, important attributes that won me over. Highly recommended.