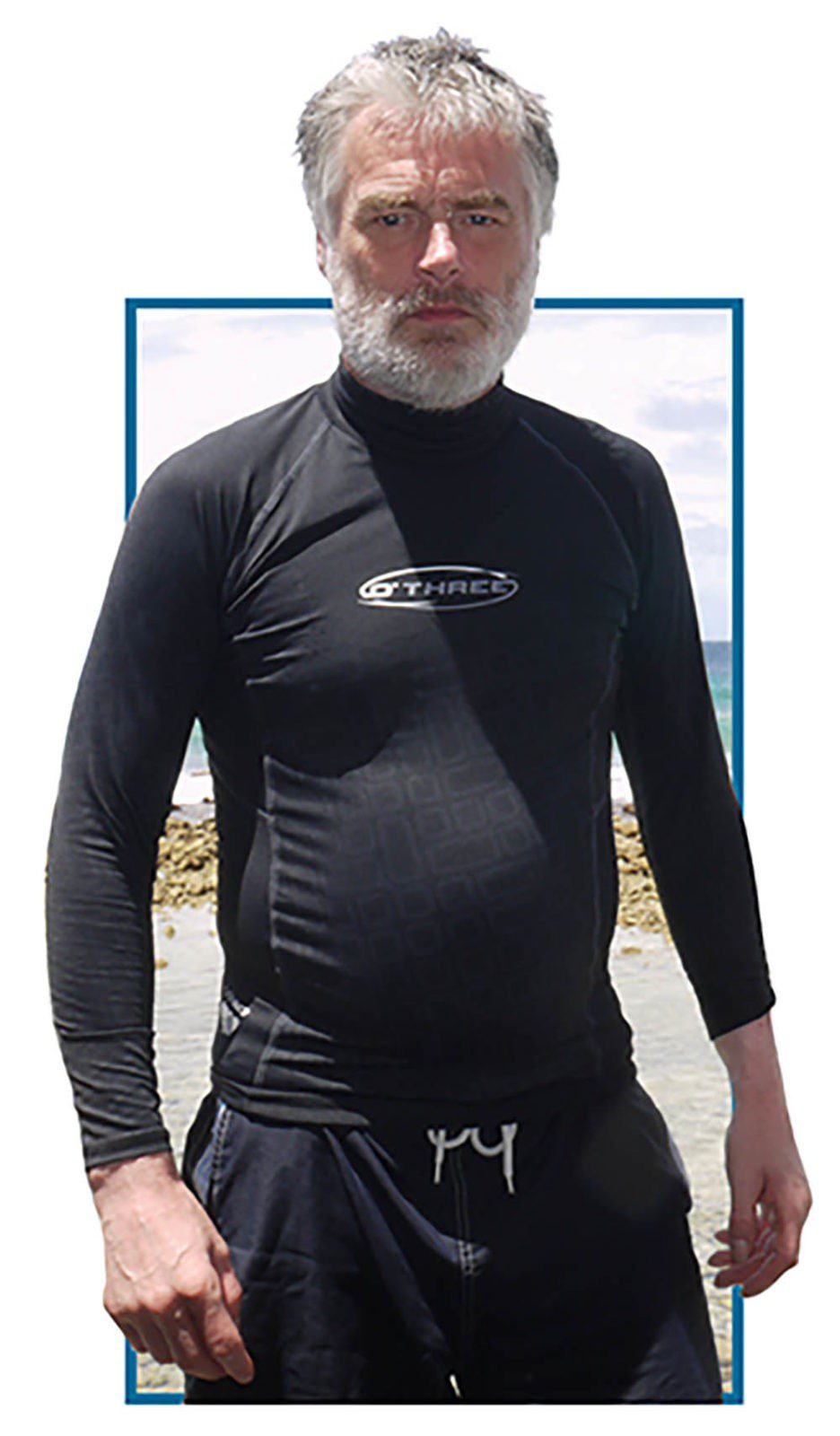 AS AQUAFANATICS’ DIVE BOAT cruised swiftly towards our next Maldivian dive-spot,

I stood in the face of the oncoming breeze and tried to work out if I was feeling any wind-chill.

I was testing the O’Three Long Sleeve Rash Vest, which is multi-purpose. It can be worn under a wetsuit for a little extra warmth or to create a barrier between your skin and a suit that isn’t as comfortable as it should be. But in warm waters in May, I was wearing it as a standalone.

I’d just made a 50-minute dive and now had

an hour to kill before making a second descent. It’s during the surface intervals that you can quickly chill in a damp dive-skin or wetsuit.

In fact, one reason surface-sports wetsuits are often made from neoprene that isn’t faced with

a nylon outer is because water quickly evaporates from the bare rubber, reducing the chill-factor, compared to nylon, which stays wet and encourages heat-loss.

But there was a warm wind coursing over the bow and results were inconclusive – I’d need to find another way to test.

O’Three has been around a long time and has established, as you can see from previous divEr tests, a superb reputation for the quality of its drysuits. It has also paced its growth, making sure that its ability to control aftersales service isn’t overwhelmed by burgeoning sales.

When a friend of mine had minor problems with his suit, it handled the problem with alacrity, efficiency and courtesy.

Although I don’t own an O’Three drysuit, in the past it has done sterling repair work on the one I do have, bought before O’Three even existed.

The Rash Vest combines polyester and Spandex. It’s said to be jellyfish-proof. I can’t vouch for this.

I saw no jellyfish on my Indian Ocean dives and, while a friend keeps jellyfish, the fall-out had I damaged them and, as his tank is in London, the risk assessments for the HSE, would have been challenging (Intention: See if rash vest is jellyfish-proof. Methodology: Stick arm in jellyfish tank. Risk: Getting stung).

It’s also supposed to provide a high sun-protection factor, but it was overcast in the Maldives. Even so, shaven-headed divers sported baseball caps while waiting the few minutes for the boat to pick them up.

But I didn’t really have the opportunity to find out if the O’Three would prevent sunburn, because my schedule allowed no time for sunbathing. That test would also have to wait.

“Made to Fit” is an O’Three slogan. In full disclosure, O’Three also supplies my P-valve sheaths, so when I asked to try a medium rash vest, Josh might have had inside information when he suggested

a large. Or else he’d just seen that I have middle-aged spread.

The medium fitted well and was very comfortable topside and under water.

I made my two dives, stood in the wind on the way back again and never felt cold.

Back home in Kent, I wanted to revisit the UV50 SPF claimed by O’Three. A couple of hours’ gardening in June’s glorious noon sun (no mad dogs to be seen) in rash vest and shorts proved the validity of O’Three’s claims. My legs burned, my torso and arms didn’t.

In fact, O’Three points out that the vest doesn’t have to be worn only for watersports – it’s fine for leisure wear. And gardening.

To retest resistance to wind-chill I put the garment on under my shower and stood for 10 minutes in front of a large floor fan. While the fan whipped at the droplets on my legs and I could really feel the cold, my torso, covered by the O’Three, stayed warm. Recommended.