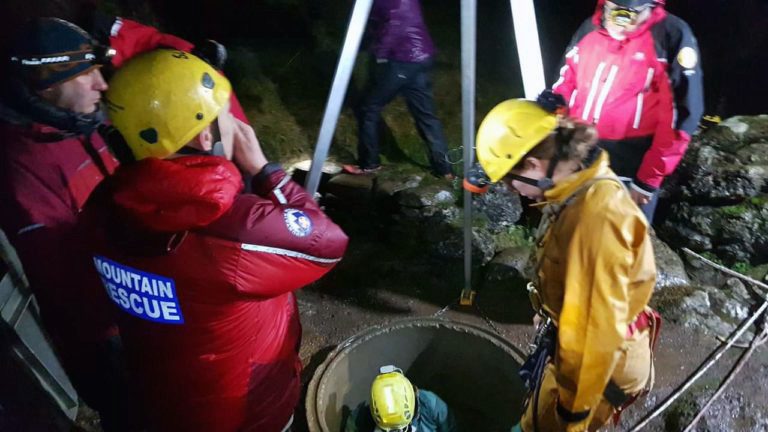 A cave-diver in his 60s has died while exploring part of the Three Counties System in Cumbria. The man’s body was recovered from access-point Lancaster Hole by a team of volunteers in the early hours of Sunday (5 January).

Cumbria police alerted the London-based Cave Rescue Organisation (CRO) at around 5pm the previous day when the diver failed to return from a flooded section of the cave beneath Casterton Fell near Kirkby Lonsdale.

As many as 40 CRO members and divers from the Northern section of the Cave Diving Group (CDG) turned up to help with the search.

One of England’s biggest networks of limestone caves, the Three Counties System extends beneath Cumbria, Lancashire and the Yorkshire Dales. Divers have been extending the downstream passage from Lancaster Hole, and have so far explored some 900m beyond the sump pool from which it is normally accessed.

“As well as searching from the point where the cave-diver entered Lancaster Hole downstream passage, other entrances and possible exits were also searched by team-members and a cave-diver, in case the diver had emerged from the system elsewhere,” reported the CRO.

“The initial search from the access point was led by another member of the CDG, who planned to search the first section of the downstream passage. Other CDG members were preparing to conduct an extended search if this initial search did not locate the casualty.

“Unfortunately, while conducting his underwater search the rescue diver discovered the missing diver, approximately 60m into the sump. The casualty was immediately brought back to the sump pool chamber and removed from the water, where it was apparent that he was deceased.

“All team-members were then instrumental in conducting a lengthy and difficult extraction back to the surface of the fell.”

The CRO said that although it knew the cave-diver, he was not a member of any cave-rescue team. Local press have reported that he had travelled to the cave from West Bradford in Lancashire, some 30 miles away.

Cumbria Police are investigating on behalf of the coroner.