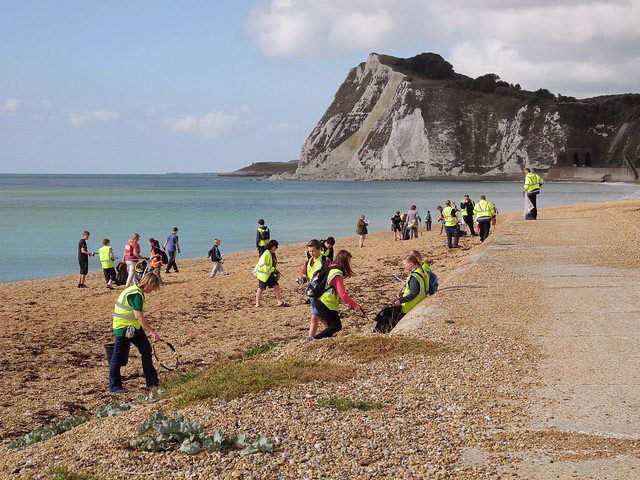 Volunteers are being sought to adopt a beach and organise a clean-up and survey on it, as part of the Marine Conservation Society’s four-day Great British Beach Clean event from 20 to 23 September.

More beaches were cleaned too, up by 155 from the previous year to 494 locations, and more than 600 items of litter were picked up for every 100m of coastline surveyed.

“Cleaning so many individual beaches last year was a fabulous achievement… but we know that it’s only the tip of the iceberg,” says MCS Beachwatch Officer Lizzie Prior. “There are hundreds and hundreds of beaches around our coasts that have never been cleaned and surveyed – and it’s the collection of this data that is so important.”

The MCS says that data gathered over 25 years of Great British Beach Cleans has been instrumental in the introduction of the 5p single-use carrier-bag charge, the ban on microbeads in personal cleaning products, commitment to a Deposit Return Scheme in Scotland and consultation on one in England and Wales, and the ban on plastic straws, stirrers and cotton buds in England from next year.

“This year we’re appealing for more people to adopt a beach and become one of our army of beach-clean organisers,” says Prior. “It’s an absolutely vital role because the more beaches we have litter data for, the clearer the picture we will have of where it all comes from and what needs to be targeted next.”

Sponsoring the event for the first time is the Ocado Foundation, which is donating £300,000. Register to take part here.

* MEANWHILE an underwater clean-up in Florida on Saturday (15 June) flagged on Divernet earlier this month has resulted in a new Guinness World Record for number of scuba divers taking part in such an event.

A team of 633 divers broke the previous four-year-old record of 615, as part of an event hosted by dive-centre Dixie Divers around a fishing-pier in Deerfield Beach.

Although the record is titled Most Participants in an Underwater Clean-up in 24 Hours (Single Venue), the team took only two hours to achieve their goal. A GWR adjudicator was on the spot to verify the record.