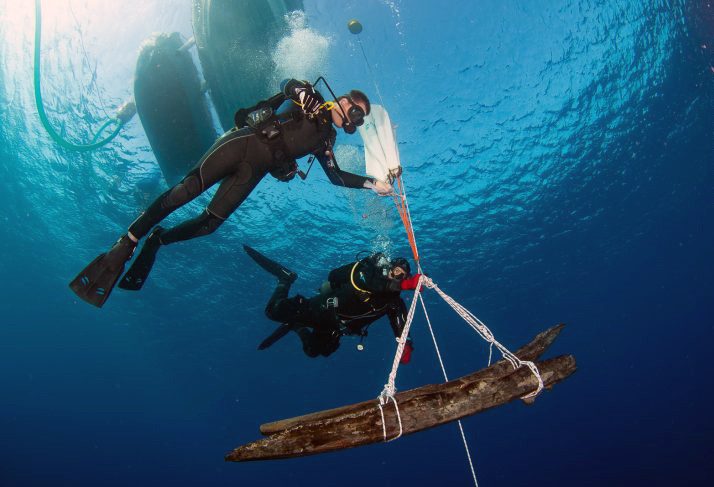 Greek archaeological scuba divers have recovered a variety of artefacts during the most recent excavation of British diplomat Lord Elgin’s ship the Mentor, which sank in the Aegean Sea in 1802.

Passenger belongings and parts of the rigging system were found during the excavation, which was carried out under the supervision of Dimitris Kourkoumelis of Greece’s Ephorate of Marine Antiquities from 4-21 September last year.

The Ministry of Culture & Sport, of which the Ephorate is part, has just announced what was achieved by the team of 18, which it said included archaeologists, marine biologists, diving instructors, surveyors/engineers, antiquities conservationists and seabed technicians.

Elgin’s two-masted sailing brig had left Greece for Britain loaded with crates of marble sculptures taken from the Parthenon, Acropolis and other Athenian monuments. It hit rocks during a storm and sank at a depth of 23m in the bay of Agios Nikolaos, south-east of the Ionian island of Kythira.

Everyone aboard survived and Elgin mounted a salvage operation using sponge divers who succeeded in recovering what became known as the “Elgin Marbles”. These are still controversially displayed at the British Museum, now rebranded as the “Parthenon Sculptures”.

The latest underwater excavation continued from where that of 2019 left off, on the western side of the hull. Many timbers remain but scattered over the seabed, evidence of the level of destruction that occurred as the Mentor hit the bottom, say the archaeologists.

They add that the number of remains found trapped under rocks also indicate the powerful wave action which, assisted by south winds, continues to affect the wreck.

A number of timber and iron objects were found to be parts of the rigging around the rear mast. They included rollers, bolts and pulleys, some of which retained fragments of mooring rope. To date 35 complete and partial pulleys have been found.

Also discovered were parts of leather shoes, with in one case a complete sole; shoe and belt buckles; coins, including a small one probably meant for use in card games; two chess-pieces, adding to the six previously found, probably from the same set; and fragments of cooking and other utensils.

Dive-teams have been excavating the Mentor since 2011. In that time artefacts found have included navigational instruments, gold watches, gold rings and earrings, cooking pots, chains, coins, bottles and buttons.