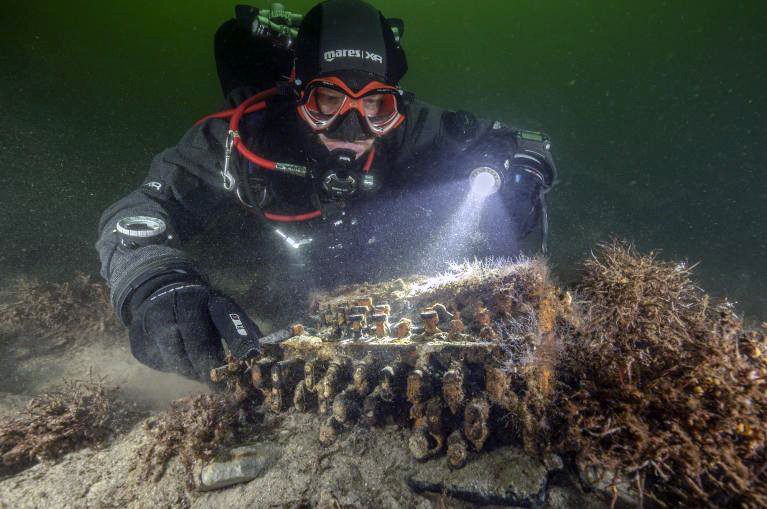 German scuba divers working to clear ghost fishing-gear in the Baltic Sea thought they had come across a typewriter entangled in netting. On closer inspection, they realised that they had found a rare Enigma cipher machine from World War Two.

The story of how British cryptographers at Bletchley Park cracked the Enigma codes used in Nazi military communications is well known, and the machine is believed to have been jettisoned during a mass scuttling of German U-boats near the end of the war 75 years ago.

The divers were working for Submaris, a scientific diving organisation based in Kiel, on a long-term commission for international wildlife charity WWF to clear ghostnets in Geltinger Bay, near Germany’s border with Denmark. Underwater archaeologist Florian Huber, who was on the dive, quickly realised the historical significance of their chance discovery.

On the night of 4-5 May, 1945, shortly before the German surrender, the German Navy had executed its “Rainbow Order”, whereby the crews of some 50 U-boats scuttled their vessels rather than hand them over to the Allied forces.

Altogether more than 200 submarines that had operated in the North and Baltic Seas were sunk in this way, along with their Enigma machines. Although several hundred thousand of the devices had been manufactured, only a few hundred are known to have survived the war, and they can command high prices today.

German engineer Arthur Scherbius invented Enigma machines, which were used to encrypt most of the radio messages transmitted from the German Wehrmacht and Navy and to decrypt them on receipt.

The breaking of the code by British mathematician Alan Turing’s team at Bletchley in 1941 was kept a closely guarded secret, giving the Allies a vital edge in the Battle of the Atlantic. At the peak of the operation some 3000 German messages were being decoded daily.

The device is now in the restoration workshop of the Museum of Archaeology in Gottorf Castle in Schleswig. Designated an archaeological find, it is now the property of the state of Schleswig-Holstein.