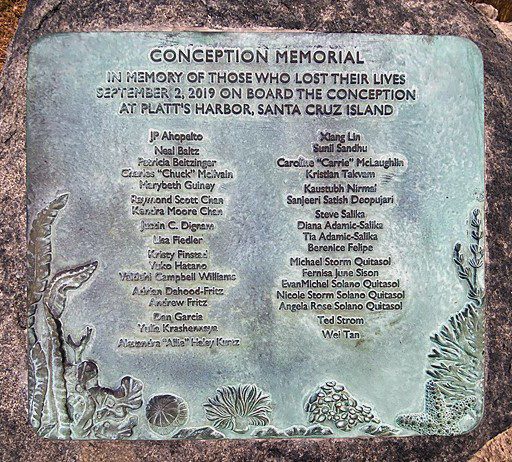 Operators of US dive-boats such as the Conception liveaboard, on which fire caused the deaths of 34 people in California in 2019, will be unable to dodge financial liability if a new bill passes into law.

California Congressman Salud Carbajal and Senator Dianne Feinstein introduced their Small Passenger Vessel Liability Fairness Act on 22 September, in a bid to change the maritime liability regulations that had been invoked by Conception owners Glen and Dana Fritzler of Truth Aquatics within days of the fatal fire.

Under the current Limitation of Liability Act of 1851, which dates back to England in the 1700s and was also invoked by the operator of the Titanic, passenger-vessel owners can limit the extent of their liability to the value of the vessel’s remains. As a total loss, the Conception has no value under this law.

The Carbajal-Feinstein bill, drafted in consultation with the US Coast Guard (which is itself being sued by the families) and the Justice Department, would require owners to be held legally responsible, including for payment of compensation, whatever the value of the boat. If passed, it would apply retroactively to the Conception tragedy.

“The victim’s families are currently being denied compensation for those wrongful deaths because of an antiquated and unfair law,” said Carbajal. “I am proud to work with Senator Feinstein to right this wrong and help the victims’ families get the compensation and justice they deserve.”

“The families of those who perished in the tragic Conception boat fire have filed claims against the owners of the boat for violating federal safety rules, but they may not receive any compensation because of a 170-year-old law that doesn’t account for modern tourism such as commercial dive-boats,” said Feinstein.

“Our bill would fix this egregious oversight and allow the families to receive recompense from the boat’s owner.”

Jeffrey Goodman, a lawyer representing the victims’ families, described the bill as “long overdue” and said that although the Fritzlers were unlikely to have sufficient assets to pay the required compensation, it would hold such operators more accountable and “promote maritime safety” in future. The Fritzlers sold the other two boats in the Truth Aquatics fleet last year.

The cause of the Conception fire could not be pinpointed in the National Transportation Safety Board’s investigation but it held the owners to blame for lack of oversight, as reported last year by Divernet.