Malapascua in eye of the storm

Malapascua in eye of the storm 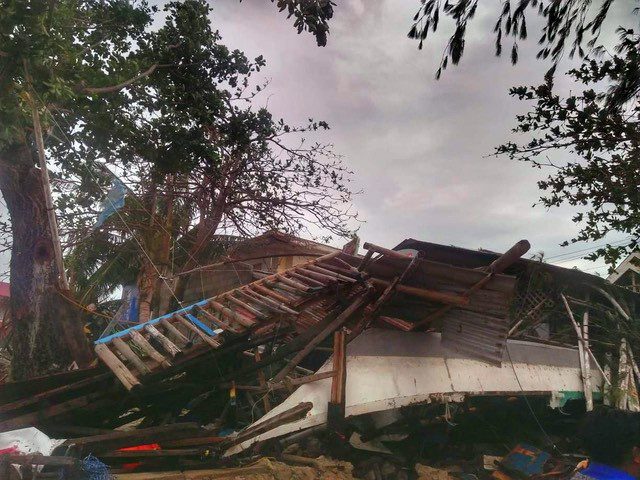 A boat has been blown through what was the home of Thresher Shark Divers' staff.

Popular diving islands Malapascua and Boracay are among parts of the central Philippines to have been affected by Typhoon Ursula, although there are no indications of loss of life at either location.

The powerful tropical storm, referred to as Phanfone internationally, killed at least 28 people with 12 reported missing across the country during the Christmas period.

“The eye of the storm passed directly overheard, but it was not as powerful as Haiyan in 2013, thankfully,” said Andrea Agarwal, owner of Malapascua’s Thresher Shark Divers, which lost all three of its dive-boats. “However, many people have damaged or destroyed houses – we are still trying to work out the full extent.

“I’m pretty sad about the boats – we’ve never lost all three in one sitting – but we’re back on our feet already and managing to dive,” said Agarwal. “The crew have been amazing and, in usual Filipino style, have bounced back with smiles on their faces.”

“The typhoon did hit hard, with a lot of sunken boats and widespread but not catastrophic damage around the island,” Nick Greenop of Malapascua’s Evolution Beach & Dive Resort told Divernet. “There were no major injuries, however, which is of course the main concern.”

The clean-up began immediately, said Greenop on 27 December, with “a lot of dive operators out in the water today, us included. Electricity has been restored to much of the island and we are set to keep rocking into 2020!”

“The thresher sharks are fine too,” said the centre’s Matt Reed, referring to Malapascua’s famed underwater attractions. He said that the clean-up of debris was ongoing and “everyone is trying to get by with the remaining boats available. Power is back on in some parts of the island and Evolution is running fine with our in-house genset.”

On Boracay, meanwhile, power and communications were seriously affected by the typhoon, while disrupted ferries and flights left many people stranded. But once the island's signal tower had been repaired on 27 December, Aaron Tan was able to tell Divernet that his Fisheye Divers centre was undamaged and had been able to resume operations on Boxing Day.

“Most of the dive-centres' boats have been damaged by the typhoon, but we were lucky and made the right decisions based on our previous experience,” he said. “Most hotels are running well because they have emergency generators.”

Typhoon Ursula hit the central Philippines on Christmas Eve, but will have moved clear of the country into the South China Sea today (28 December), according to the National Disaster Risk Reduction Management Council.

With wind speeds of up to 125mph, Ursula followed a similar track to Typhoon Haiyan, the region’s deadliest storm of six years ago, but was considerably weaker. Haiyan left more than 7000 people dead or missing and displaced more than 5 million. So far it’s known that besides the casualties Ursula has led to the evacuation of more than 58,000 people.

As in the aftermath of Haiyan, the message from dive-centres in affected areas is that they remain open for business – and that continuing to visit is the best way for divers to show their support.

Meanwhile Andrea Agarwal has started a reconstruction fund-raising page. It features a photograph of the destroyed home of two Thresher Shark Divers’ staff, showing an upturned boat that has blown right through the building.