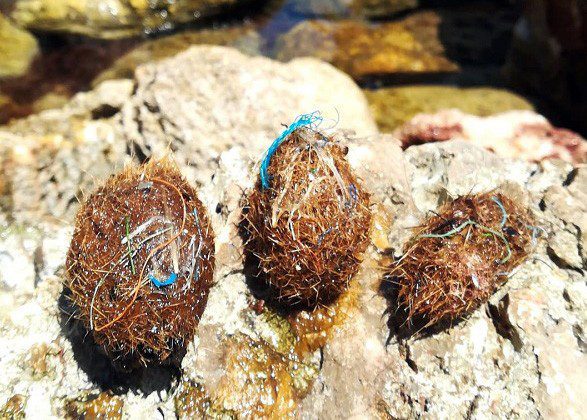 But it seems that the vegetation is also making a previously unsuspected contribution – in the battle against plastics pollution. Using seagrass as a natural mechanism, the ocean has found a way of spitting neatly packaged microplastics back out of the water and onto land.

A pioneering study led by the University of Barcelona’s Department of Ocean & Earth Sciences has revealed that in underwater grasslands plastics are being trapped and incorporated into bundles of natural fibre dubbed “Posidonia balls”.

Both natural and plastics fibres intertwine around the pods from which seagrass roots and leaves emerge. The Posidonia balls are later expelled from the marine environment by wave action during storms, with many like those pictured above ending up on beaches.

The researchers analysed dense beds of Posidonia oceanica, one of the 70 seagrass species, off the Mediterranean island of Mallorca, and counted the number of balls found on four of its beaches. They estimated that about 1470 pieces of microplastics were being collected for every kilogram of plant fibre.

“According to the analyses the trapped microplastics in the prairies of Posidonia oceanica are mainly filaments, fibres and fragments of polymers that are denser than sea water, such as polyethylene terephthalate (PET),” said marine biologist Anna Sànchez-Vidal, leader of the study.

“The plastics we find floating in the sea are only a small percentage of everything we have thrown into the marine environment,” she said. “ However, first estimations reveal that Posidonia balls could catch up to 867 million plastics per year.”

The Mediterranean contains high quantities of floating plastics, and Posidonia seagrass occupies large areas of the sea, to depths of 40m.

“This is why we need to protect and preserve these vulnerable ecosystems,” conclude the researchers, whose study is published this month in Scientific Reports.