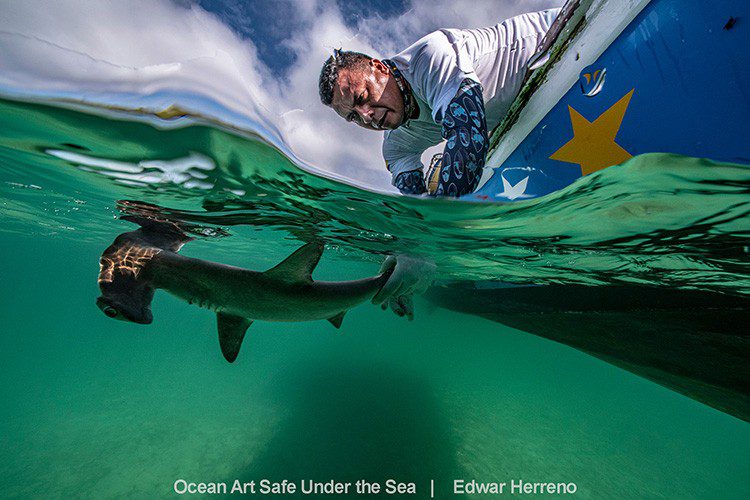 Best in Show in a special Ocean Art underwater photo competition called “Safe Under the Sea” was this shot by Edwar Herreno called “Releasing Hope”, showing a marine biologist releasing a tagged hammerhead pup in Galapagos.

The Ocean Art Underwater Photo Competition is organised annually by US website the Underwater Photography Guide (UPG), but because of coronavirus this year an offshoot Safe Under The Sea competition was also held, as trailed on Divernet in mid-April. The results have now been announced.

Recognising that international dive travel would be one of the business sectors hardest hit by Covid-19, the competition was aimed at bringing the global diving community together creatively while raising funds to fight the virus.

A quarter of the proceeds from entry fees was pledged to the CDC Foundation, a charity created to support Centres for Disease Control in some 140 countries, and to the World Health Organisation Covid-19 response fund.

UPG staff judged the thousands of entries from 79 countries. “These photos showcase some incredible perspectives in a time when perspective is key,” it stated. “Although it was a smaller, mid-year competition, the selection of winning photographs has been no less powerful.”

“The images from this special competition, especially the winning conservation image, represent hope,” said UPG publisher Scott Gietler. “Hope for our oceans, hope for our travel and dive industries ravaged by coronavirus, and hope that our nations can come together.”

The top three shots in each of the 12 categories can be seen at the UPG site < https://www.uwphotographyguide.com/ocean-art-safe-under-the-sea-winners > and the winners are also featured in the October issue of Diver magazine. Winners of the main Ocean Art 2020 competition are set to be announced in September.

In “Releasing Hope”, Herreno depicted Eduardo Espinosa, a marine biologist and Galapagos island park ranger, who discovered and has been working to conserve a unique nursery area for critically endangered hammerhead sharks.

On assignment for a conservation organisation, the photographer followed Espinosa and his team as they tagged and studied the hammerheads, capturing 12 pups on the day he was there.

“I’ve been in different shark nursery areas but never seen anything like this,” said Herreno. “Besides hammerheads we saw blacktips, whitetips, baby turtles, eagle rays – it was just like in a movie.”