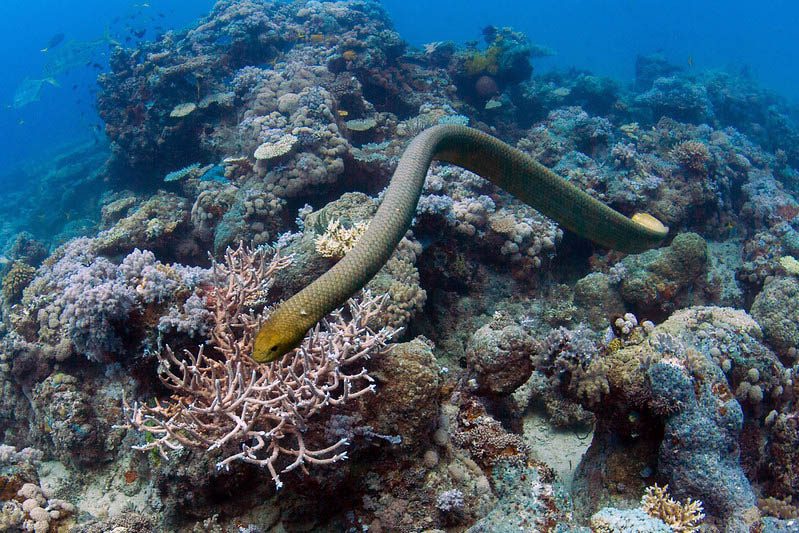 Unprovoked sea snake “attacks” on scuba divers appear to occur in the heat of passion, say researchers in Australia. They have concluded that it is mostly male snakes that approach divers – straight after a failed pursuit of a female during mating season.

The species, found on reefs off northern Australia, PNG and in the Coral Sea, will swim rapidly towards divers making jerky zigzag movements, and sometimes wrap themselves around their limbs or fins, flicking their tongues and even biting them.

The team set out to determine why a free-ranging olive sea snake should act in this way towards divers, who were too large to be mistaken for prey and could easily be evaded if feared to be predators. They also wanted to determine how a diver should best respond to an apparently aggressive approach.

They analysed 27 months of observational data made by one of their number, Tim Lynch of CSIRO, while diving on the southern Great Barrier Reef in 1994-95. The conclusion was that what they call the snakes’ “rapid approaches” were in fact “misdirected courtship responses”, exacerbated by their poor eyesight.

Incidents occurred mainly during the winter breeding season (May-August). Sea snakes approached the diver on 74 of 158 encounters, including 13 instances of rapid charging. It was usually males that made repeated approaches, spent more time with the diver and exhibited typical courtship behaviour such as coiling around a limb.

The agitated approaches often occurred after a courting male had lost contact with a female he was pursuing, after an interaction with rival males, or when the diver tried to flee, in the same way a female snake might evade the male’s advances.

When the rapid approach was made by a female it usually happened when she was being chased by males, so she might have seen the diver as a place of refuge.

The advice to divers was clear: keep still and avoid retaliation, because if you try to get away you’ll be emulating a female’s evasion tactics.

“By staying still and allowing a sea snake to investigate them with its tongue, a diver is unlikely to escalate the encounter and be bitten,” said Dr Ross Alford of JCU.

The study is published in the journal Scientific Reports.