UK Poised for record beach-clean, as Grenada acts on plastics

UK Poised for record beach-clean, as Grenada acts on plastics 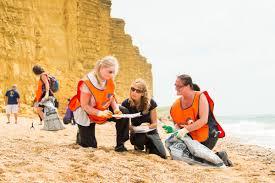 The UK’s biggest annual beach-clean takes place over four days around this weekend and, based on pre-registrations, organiser the Marine Conservation Society (MCS) expects record numbers of volunteers to turn up, and at more beaches than ever before.

Last year almost 7000 volunteers cleaned up at 339 locations from north Scotland to Cornwall, Northern Ireland to the Channel Islands. This year, some 7400 people have already pre-registered to clean 432 beaches – and pre-registrations have been known to triple over the weekend itself, according to MCS Clean-up Project Officer Lizzie Prior.

“Last year, by this time, a couple of thousand volunteers had registered, but our final figures were just short of 7000,” she says. “Since then, we’ve seen the BBC’s Blue Planet II effect, so that more and more people have been keen to clean beaches at our many events throughout the year.”

At least eight MPs including ministers George Eustice and Caroline Dinenage are set to participate in England, while two Scottish Government ministers and four Scottish MPs and four Welsh Assembly members have volunteered to join in.

Among well-known divers taking part in Newquay will be underwater cameraman Doug Allan and Channel 4’s “heavy-metal marine biologist” Tom the Blowfish Hird (both will also be speaking at DIVE 2018, the Dive Show at the NEC on 27/28 October).

Register as a volunteer here or just turn up on the day – the events are listed on the MCS website.

The government has introduced a Non-Biodegradable Waste Control Act that bans the importing of polystyrene foam with immediate effect and outlaws its use by April next year.

All other single-use plastics products such as bags, cutlery, cups and plates and drinking straws will be banned by February. The government says the move is designed to protect both the seas and its own citizens’ health.

Its 30-plus dive-sites feature a large number of shipwrecks including the Caribbean’s biggest, the Bianca C, and a Jason deCaires Taylor Underwater Sculpture Park. The island’s second annual Dive Fest, a four-day event run by the Grenada Scuba Diving Association, begins on 3 October.