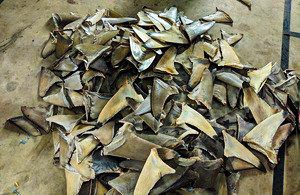 Campaigners have welcomed the UK’s formal announcement that from next year it will become the first European nation to ban the import and export of shark fins and any products containing them, including shark fin soup.

Before Brexit, the UK had complied with EU legislation that permitted any individual to carry up to 20kg of dried shark fins across European borders as a personal import.

Divernet reported in May that the loophole, which had allowed shark-fin traders to operate in the UK, was set to be closed. The new law will require any imported and exported fins to remain attached to the shark’s body and be traded as such.

Bite-Back Shark & Marine Conservation, a prime mover in the campaign to close the loophole, had said that each individual import allowance was worth around £3600 on the black market and was enough to make 700 bowls of shark-fin soup.

DEFRA, the Department for Environment, Food & Rural Affairs, issued a call for evidence last December, seeking views on the scale and impact of the trade in the UK. It has published a summary of responses including details of the next steps to be taken.

“Shark-finning is indescribably cruel and causes thousands of shark to die terrible deaths,” said International Ocean Minister Lord Goldsmith. “It is also unforgivably wasteful. The practice is rightly banned in UK waters but the trade continues, with serious implications for the future of these magnificent creatures.

“Our action will not only help boost shark numbers, it will send a clear message that we do not support an industry that is forcing many species to the brink of extinction.”

“It is encouraging to see the UK addressing the fin trade as an element of overfishing – the principal threat to sharks and rays,” commented the Shark Trust’s director of conservation Ali Hood.

“And we’re noting that the UK is ramping up its engagement in domestic and international shark-conservation issues, currently championing the science-based advice for a prohibition on mako in North Atlantic high-seas fisheries.”