WILL APPLEYARD is fortunate to catch one of nature’s great spectacles on his first trip to the Caribbean. 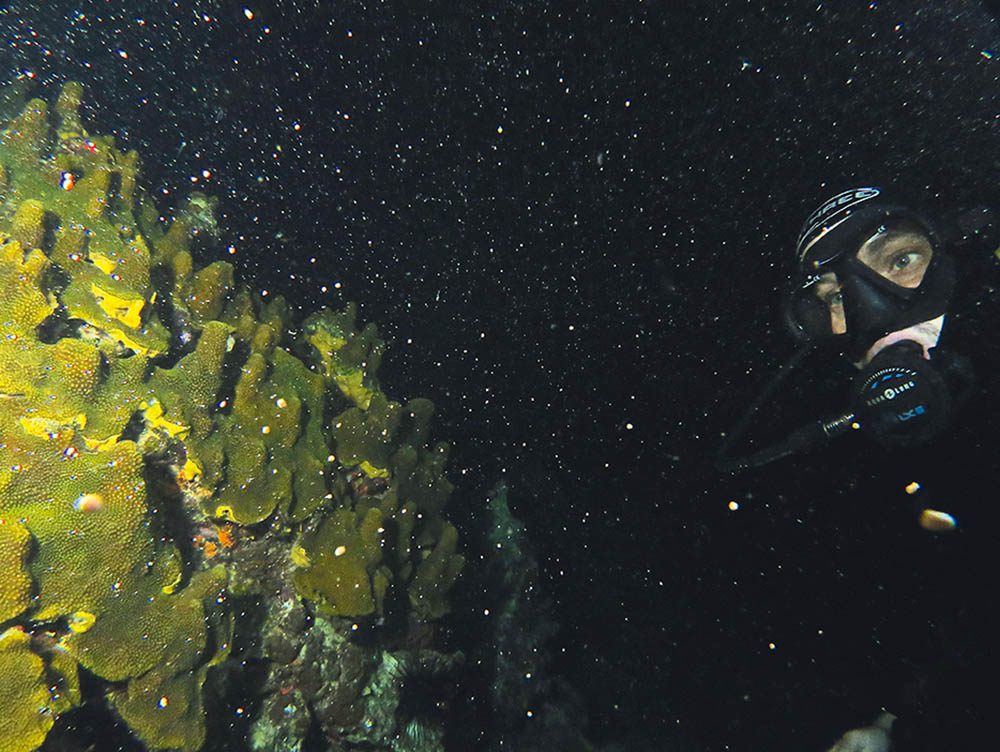 Will with the spawning coral.

WADING INTO THE INKY blackness of the Caribbean Sea by night, I felt privileged to be heading out on a dive to witness a fleeting act of nature – but at the same time, I felt rather underdressed exposure-suitwise.

Once neck-deep, I realised that my board-shorts and rash-vest might not quite be up to the job where protection was concerned.

Anyway, enough of my diver-wardrobe malfunctions, and forget about the spiny sea-urchin stings – I’m here to witness coral-spawning!

The Anse Chastanet resort’s own dive-centre Scuba St Lucia has been documenting this annual event for more than two decades now, predicting its arrival pretty accurately from year to year. Its house-reef is where it all happens, and where sand eventually gives way to submerged islands of pristine coral reef just metres from a coconut-tree-fringed shore.

Here, a 5m-deep plateau boasts a wide selection of hard and soft corals along with oodles of supporting fish life, and then drops off sharply down to 20m-plus, where the reef really begins to show off.

To get a feel for the reef before our spawny night-dive, my partner Ana and I joined a group of friendly American coral enthusiasts and “dove”, as they would say, the house-reef during the day.

THE REEF AT Anse Chastanet is immaculate and, as this was my first visit to the Caribbean, I was looking forward to seeing some unfamiliar ocean-based faces.

Whip-corals lunge out into the blue alongside sea-fans in a static battle for food, forever filtering in the 28°C water. Brain corals of various sizes sit between more barrel sponges than I have ever seen in one place, and some of the biggest I’ve ever seen, too.

Reef fish dart about, and wrasse-manned cleaning stations are established every few metres. Some of the reef fish here are familiar to me, others aren’t.

One familiar face comes into view as I bob over a lump of coral, and it belongs to a lionfish. These guys are not at all welcome in this part of the world, and regarded as an invasive species.

In the Indian Ocean and Red Sea, lionfish form part of a daily diet for sharks, grouper, large eels and frogfish among others, yet in the Caribbean those species don’t appear in great enough numbers, if at all, to keep the lionfish population in check.

Scuba St Lucia and the local fishing community have taken matters into their own hands and regularly harvest these creatures, so they eventually end up in local restaurants – they’re tasty too!

This reef, though short on bigger, predatory fish like jack, trevally or sharks, is loaded with interesting small stuff.

One creature that caught my eye was the juvenile boxfish – essentially a drifting dice gone berserk – followed by the smallest moray eels on the planet.

Pairs of banded shrimp live here in great numbers and I found a triggerfish that was a new variety to me, with the most fabulous of colouring. With all this life present during the day, I wondered what the night-time dive might deliver.

CORAL-SPAWNING EVENTS were first noted in the 1980s, with many hard and soft species releasing their eggs and sperm towards the surface after dark to create a kind of upwards snowfall.

Eventually it all meets and mixes at the surface – imagine a coral reef-style snow-globe and you’re there.

This all occurs within around 45 minutes and is triggered only (it’s thought) by a perfect combination of the lunar cycle, sea temperature and timing of the sunset.

Much of the cycle’s ingredients remain a mystery, but we do know that coral-spawning is essential to our worldwide food-chain. The coral nerds at Scuba St Lucia have worked out that spawning in their area usually happens one week after an August full moon and from one to two hours after sunset (although the month can change too, depending on when that lunar cycle falls). Either way, it’s quite a narrow window to catch!

The timing of the cycle changes as you travel around the globe. Coral-spawning occurs one first night and brittlestars then begin to follow suit on the second night.

It’s not a given that this will happen, however – the dive-centre told me that for two years nothing occurred as predicted. Why? Nobody knows.

AS THE PRE-ARRANGED night-dive kit-fiddling time came around, what seemed like a thousand divers gathered outside the centre for the briefing.

Words such as “carnage” and “torchfest” sprang to my mind as Bernd, a German all-round dive pro and coral boffin, filled us in on what to do and what not to do during the dive.

“The corals won’t spawn if you hold your torch beam on them for too long – they’re sensitive to light,” he explained. With more than a thousand divers in the water (OK, perhaps 40), I wondered what the chances were of the spawn happening.

Our group of five divers would head into the water first (good) and at intervals of 10 or so minutes the other groups would follow. We would be led by Beto, a fabulous Brazilian guide who seemed sure we’d get to see the show (better still).

We were visiting a marine park and it’s forbidden to dive without a guide in these parts, by day or night – this goes some way to maintain a healthy reef, I guess, which can only be a good thing.

The first thing to greet us as we found the torch-lit seabed at 9.30pm was the most poisonous-looking snake I’ve ever seen. This was later identified as a gold-spotted eel and quite harmless (I think) – a good start nevertheless.

A face full of fin-kicked sand later and we all left the seabed in search of deeper water, which we found at around 18m. This is where the group spread out, and Ana and I found ourselves with loads of room to enjoy the dive.

MY “CARNAGE” AND “torchfest” thoughts of earlier were unfounded and I took them back. Ana found a monster of a king crab, or “channel-clinging crab”, as they’re known, perched on the reef. If this thing swung at you, you’d lose your mask at least.

Next up during the show (and it was beginning to feel like a show, with these back-to-back appearances) was a pair of spotted spiny lobster attempting to hide (badly) from our torch-beams.

Reef-fish lay in odd positions on the reef, trying to grab 40 winks, while others were staying up late – perhaps they knew that the coral-spawning was imminent, and were waiting for a free meal?

Marine worms appear to like living in the Caribbean, too, and we identified a couple on this dive. One stands out as being a great find and goes simply by the name “The Thing”.

I thought this was a joke until I looked it up in the dive-centre’s reef guidebook. Alongside lots of other worms with quite normal or Latin names, there it is – The Thing.

It grows several metres in length, has hundreds of legs and looks like something from the 90s film Tremors. The Thing is a skittish creature, however, and doesn’t seem to want to hang around once a bunch of torch-wielding divers approach.

Moving ever shallower, to just 8m deep, Beto furiously flashed his torch for our attention. This was it – spawning time.

We found a comfortable kneeling position in the sand and, joined by Bernd, watched in awe as the coral polyps began to release their little fatty bundles. The process happened reasonably quickly at first, and after the odd pause would spring back into life again moments later, releasing spawn, or gametes, in flurries.

The surrounding water-column quickly became filled with this snowstorm-like activity, and thankfully the coral colony didn’t seem too put off by our torchlight.

We have all seen lots of this type of coral on day- and night-dives over the years, I’m sure, but to see so much of it actively doing something other than just “being coral” – exposed as living, reproducing beings – is spectacular.

Once the water was full of gametes I was expecting a fish-feeding frenzy to ensue. That can happen, but not on this occasion.

The amazing thing about the whole process (and for reasons that biologists still don’t understand) is that these coral colonies appear to be releasing their eggs and sperm simultaneously and in a synchronised manner for fertilisation to begin, because gametes will survive for only a limited amount of time.

Kneeling there on the seabed at night, watching all of this unfold in front of us, was a humbling experience I know I may never see again in my lifetime.

Attracted by our collective dive-lights, several other divers appeared, so we moved off to allow them to appreciate the remainder of this fascinating scene, eventually leaving the water to find beaming divers chatting enthusiastically about the successful dive.

Anse Chastanet advertises the annual coral-spawning to promote reef conservation, and even with 40 or so divers in the water it organises it seamlessly. With the dive-centre attached to the superb Anse Chastanet and Jade Mountain resorts, it makes sense to stay there, with Jade Mountain being the more luxurious of the two.

Most visiting divers come from the USA, so my guess is that few people from elsewhere go to St Lucia to experience this two-night natural wonder. Why not join the few that have? As well as several night-dives, we enjoyed a handful of day-dives from one of the centre’s many boats, all within a 15-minute ride.

It’s also possible to reach the beachside bar from the dive-centre within 15 seconds – in case you were wondering.

GETTING THERE> British Airways flies direct from London Gatwick.

WHEN TO GO> Year-round. Coral-spawning occurs in August or September, depending on the lunar cycle, though note that St Lucia is in the hurricane belt and the season runs from June to November. Water temperature is 28-30°C

MONEY> Eastern Caribbean or US dollars.

HEALTH> Take mosquito protection! The beds all come with nets, but they’ll still get you if you let them.