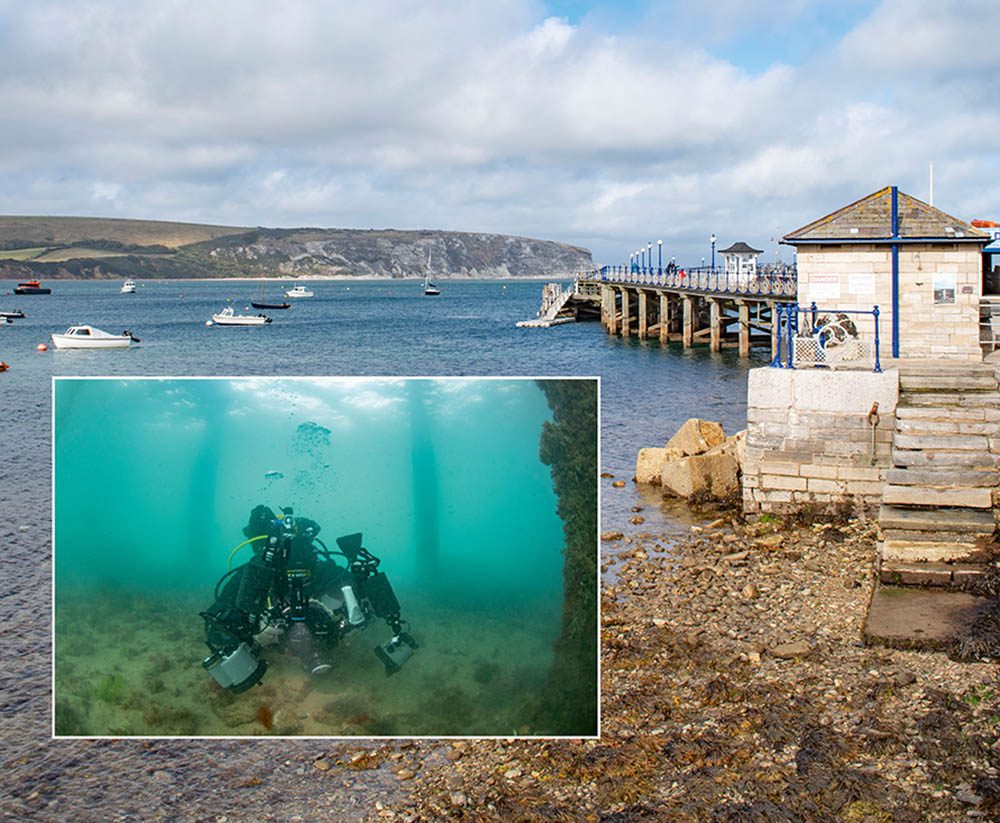 Swanage Pier and (inset) Steve Trewhella beneath it on the hunt for the elusive shrimp.

When you think of South Coast dives many locations come to mind, from the pebbles of Porthkerris through the urban sprawl of Plymouth to the cuttlefish of Babbacombe, but one piers above the rest – Swanage! (See what I did there?)

I had been meaning to dive Swanage Pier for years, but for one reason or another had never found the time. The fates recently opened the door to me getting a quick dip at the location, but I needed the help of someone knowledgeable to get the best out of it, and this guru came in the shape of macro-photographer Steve Trewhella.

Steve is based in Dorset and is the author of two books, one on British seahorses and the other on beachcombing. He knows Swanage’s secret spots, as well as where to find its most elusive creatures.

He was particularly enthusiastic when he mentioned the possibility of seeing a snakelocks anemone shrimp there. According to MarLin, the Marine Life Information Network, this shrimp has been recorded only from Swanage Pier, though it was originally described from the Channel Islands. Its description is appealing: transparent body with scattered blue or red dots, limbs with blue or red bands, the second abdominal segment with an elongated white-pink transverse strip and the third abdominal segment with a white-pink chevron pointing backwards.

I must admit that I’m not much of a shrimp-fancier, but it sounded well worth keeping an eye out for. But my main interest at this stage was in the scalier customers such as bass, wrasse and the famous tompot blennies.

I was quite impressed by the facilities on the pier, with its parking by the sea and a reasonable charge of £1.50 for a dip. A cafe is on hand to cope with any post-dive munchies, and there are toilets for those not using wetsuits. Showers, air-fill and kit-hire facilities also add to the attraction of this shore-dive.

As Steve and I suited up, passers-by stopped to ask what we were doing. I’m always tempted to reply tennis but stayed polite and truthful.

I try to buddy up with other underwater photographers because they seem more patient and tend not to be depth-junkies, and though Swanage offers a depth of 5m at most under the pier, an extra pair of eyes is always helpful for spotting subjects to photograph.

A walk down the steps near the gents’ toilets, and we were in the water. The last couple of steps can be a bit slippery, but nothing too bad.

The tide was dropping as we made our checks and headed round to the pier.

At the start of the pier we descended to see a wall of sea-squirts and anemones. Steve looked delicately and carefully at each snakelock, obviously seeking his psychedelic shrimp, but had no joy.

Although this is mostly a macro location I had opted for popular underwater photography lens the 10-17mm Tokina fisheye, partly to get a different kind of image but also because I had forgotten my macro port. It worked out, however, because despite the 3m vis I had a mini domeport on, and the close-focusing of the fisheye proved beneficial.

It was quite a bright day, though a torch is a must for pier dives when poking into nooks and crannies to find any critters lurking within.

It’s best to stay under the pier to avoid any anglers’ lines, because this is quite a popular fishing spot, and an SMB is a good idea if you’re venturing out on the sand around the pier.

This section offers a different range of characters such as plaice, red mullet and cuttlefish, but it can be silty, so you need to avoid hitting the bottom too much.

For the first half-hour or so Steve was finding plenty of bits and pieces, gleefully pointing out little things to me as I nodded back, though often not having a clue what he was showing me.

I was starting to lose hope of finding anything worthy of a shot with my set-up but then, along a large girder, I saw a greater pipefish. It was finally my turn to point something out to Steve.

The swell was up a bit but it was workable, and the pipefish happily posed for a few shots.

Looking around the snakelocks again for signs of the funky shrimp, I found something I could actually see, a scorpionfish.

Steve mentioned later that it was unusual to see fish so close to anemones because they would happily make a meal of a sculpin, but it was sitting there apparently quite happily.

We had been down for more than an hour at this point and Steve started searching a bit more frantically among the anemones. He clearly knew something that I didn’t.

I left him to it as I searched around the pillars for the many corkwing and ballan wrasse. Shining my torch on the rubble, I could see shoals of pouting bunched together.

Then, out the corner of my eye, I saw a flash. Steve was beckoning me over with his torch and pointing at an anemone, and at last I could see the shrimp.

It was only a couple of inches long but its body was marked with remarkably beautiful patterns and colours of iridescent blues and reds.

The swell had picked up a little, so it was a case of waiting for the shrimp to become fully visible. I managed a few snaps, though of course a macro lens would have shown it to far better effect.

We were coming up to two hours under the water, which is one of the advantages of a shallow dive, and with it being September the 17°C water was pretty comfortable, even in a wetsuit.

As we headed back, a huge shoal of bass and the odd gilthead bream passed by.

I had never seen these fish so close up, but assume they’re used to the many divers who visit Swanage.

The tide had dropped quite a bit, so it was a case of crawling out by the end, but what a fantastic introduction to Swanage! It won’t be my last dive there!