MICHAEL MENDUNO is the US diver who coined the term ‘technical diving’. In the last of his three-part retrospective on the emergence of technical diving, he looks back to when tekkies were clamouring to ’bring on the ‘breathers!’ 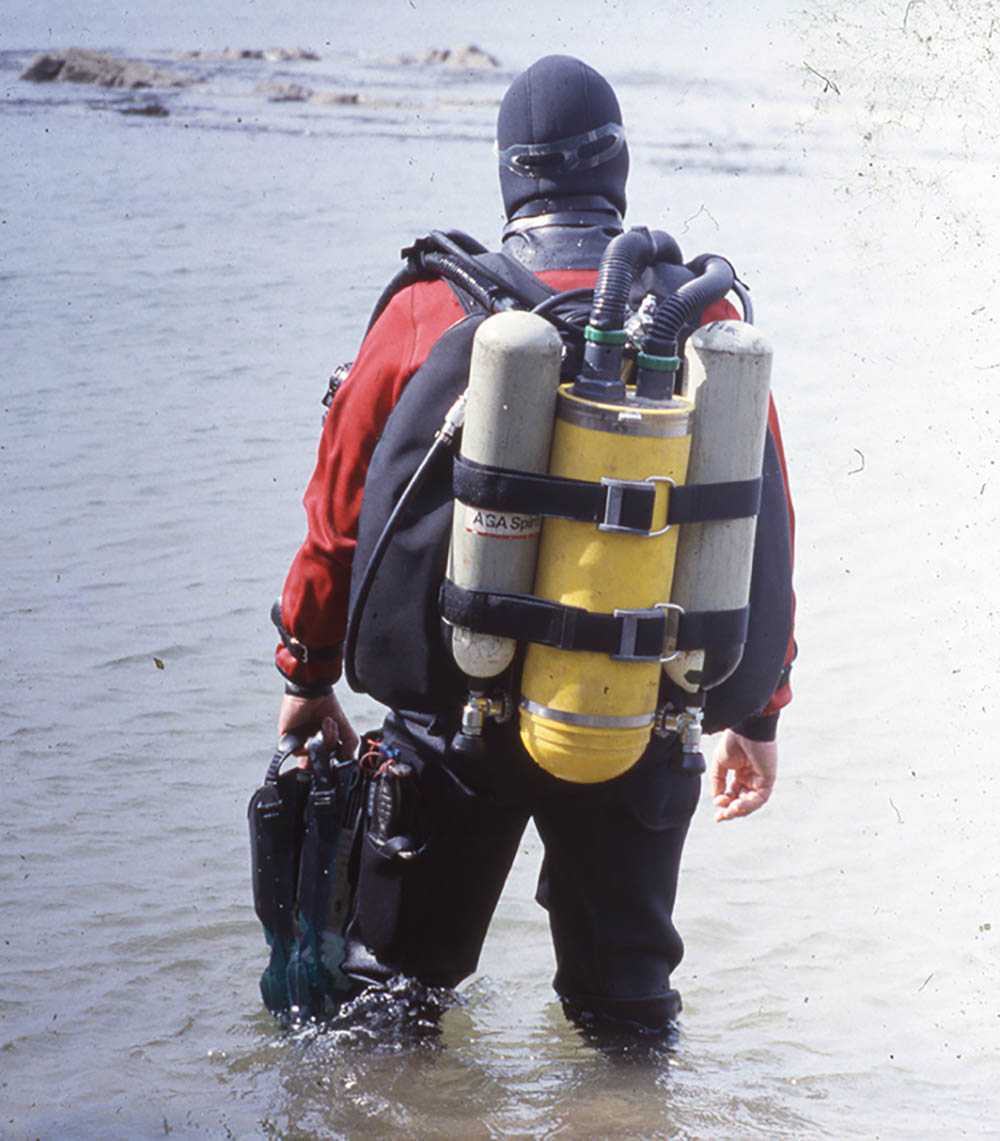 There was tremendous interest in rebreathers during the early days of tech diving. They were viewed as the ultimate in self-contained diving technology, because they could greatly extend bottom times independent of depth, while providing near-optimal decompression in a small package.

Not to mention their major cool factor.

There was no doubt in anyone’s minds that rebreathers were the future of tech diving, and likely self-contained diving as well. Of course, at the time we didn’t realise how much discipline and attentiveness was required for rebreather diving versus open-circuit scuba; the technology was not readily available.

We began reporting on rebreathers in June 1990 in our second issue of aquaCorps and published one or more articles on the technology in most subsequent issues.

In January 1993, we devoted an entire issue, the aquaCorps C2 (closed-circuit) issue, featuring a Rolling Stone-style interview with Bill Stone and others with Stuart Clough, Greg Stanton and rebreather designer and engineer Tracy Robinette, principal of Divematics Inc.

There were articles by many of the early movers and shakers in the rebreather community such as Walter Stark, Bob Cranston, Olivier Isler, Rob Palmer and John Zumrick, along with a piece on O2 management by Dr Richard Vann.

There was even a reprint of a 1969 Skin Diver magazine article by Larry Cushman on the Submarine Systems prototype rebreather, which featured a cryogenic scrubber to remove the CO2.

We also featured several rebreather sessions at the tek93 conference. It was clear at the time that there were many myths and misunderstandings surrounding the use of rebreathers, which was not surprising.

Few divers in the sport-diving community owned a rebreather, other than people such as film-makers Howard Hall and Bob Cranston and a few explorers and vendors.

“A scuba regulator is the steam engine of diving gear. It’s been around for a long time and they’re incredibly reliable.

So we decided to do something about that. I teamed up with Robinette, who had built the ShadowPac rebreather in the 1970s, and we organised the first Rebreather Forum, held in Key West, Florida, in May 1994. 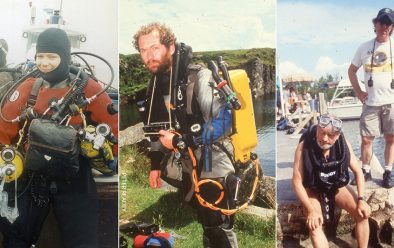 The forum featured special guests Dr Ed Thalmann, the US Navy’s diving physiology guru who oversaw the development of the Navy’s mixed-gas decompression tables, and inventor Alan Krasberg, who could arguably be considered the grandfather of mixed-gas closed-circuit rebreathers.

That first forum had 90 attendees, including five rebreather manufacturers, numerous training agencies and representatives from sport, military, and commercial-diving communities.

As a special treat, we got to tour the US Army’s Special Forces Combat Diver School in Key West, Florida which trains divers in the use of oxygen rebreathers.

There were also presentations from trainers from both the US and British Navies that taught mixed-gas closed-circuit diving.

It was the first time such a group had ever been assembled. As forum co-chair Robinette put it: “I have been involved in rebreathers for nearly 25 years and a meeting like this has simply never happened before.”

There were several findings from the forum. First, it was clear that there was clearly a market for rebreathers at a US $5,000-$10,000 price point. The only problem was that you couldn’t buy one.

I remember photographer Marty Snyderman waving his chequebook in the air, challenging any manufacturers in the room to sell him a unit. They couldn’t.

Second, the military was the only diving community that was successfully using rebreather technology, and its success was based on strict discipline and massive support, two features likely absent in the sport-diving market.

Commercial divers had rejected rebreathers as being too complex and unreliable.

As Thalmann cautioned during the forum: “A scuba regulator is the steam engine of diving gear. It’s been around for a long time and they’re incredibly reliable. 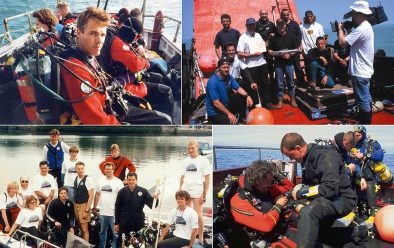 Clockwise from top right: Simon Tapson with the Starfish Enterprise team; Kevin Gurr’s team diving the WW1 HMS M1 submarine in the Channel was one of the first projects to combine mixed-gas and filming for TV. Main divers were Gurr, Richard and Ingemar Lundgren and Phil Short; Kevin Gurr helping to put a trimix team in the water; The Lusitania 94 team led by Polly Tapson carried out the first British mixed-gas diving expedition on a deep wreck.

Third, it was clear that training requirements for rebreather diving were significant. And, finally, semi-closed rebreathers were likely to be the first adopted by sport divers, because of the relative simplicity and lower cost.

Interestingly enough, unlike nitrox, there were few concerns that the technology might not be appropriate for sport divers. On the contrary, it seemed to be only a matter of time.

As the prescient PADI technical development director Karl Shreeves observed: “When rebreather technology is ready for the mainstream, PADI will be there to offer training.”

We continued to offer rebreather workshops and “try-dives” (not “buy-dives”) hosted by manufacturers at our annual tek conference. Manufacturers were promising that their units would be available soon, but they were slow to materialise.

In 1995, Dräger launched the Atlantis, a semi-closed-circuit rebreather designed for recreational divers. Having a major manufacturer with more than a half century of rebreather manufacturing experience enter the sport market gave needed credibility to the notion of a sport-diving rebreathers.

Ironically, of course, some of the first underwater photos and film images of undersea life had been taken by Hans Hass in the 1940s using a Dräger oxygen rebreather.

In addition, in Japan, Grand Bleu began selling a semi-closed unit called the Fieno. Interestingly, although the tech-diving community was booming, it seemed likely that rebreathers were going to be adopted by the recreational community before the tekkies got theirs.

The timing seemed right, so Robinette and I organised Rebreather Forum 2.0, which was held in Redondo Beach, California, in September 1996.

PADI was one of our sponsors, and agreed to publish the proceedings of the forum through its Diving Science & Technology (DSAT) subsidiary. There were more than 100 attendees, along with 15 rebreather manufacturers. Of these, only five are building rebreathers today.

At the time, the US and British navies were the largest users of mixed-gas rebreathers, with an installed base of about 240 units in service out of a total of 600 in inventory. There were at most 25-50 units in the tech community.

Most of these belonged to small groups such as Stone’s team, small boutique manufacturers such as Steam Machines and a few customers, a handful of explorers and film-makers.

At the time of the Forum, Dräger product manager Christian Schultz reported that it had sold about 850 Atlantis semi-closed rebreathers, and we estimated that there might have been as many as 3000 Fienos sold in Japan. 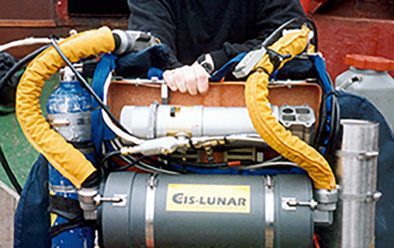 It would be another year, before Ambient Pressure Diving in the UK launched its Inspiration mixed-gas closed-circuit unit, and the following year when Jetsam Technologies introduced the KISS classic.

The conclusions of Rebreather Forum 2.0 were several-fold. First, there was universal interest in rebreathers. Unlike nitrox, there was no opposition.

Again, the thinking was that semi-closed systems such as the Dräger units might be more suitable for sports divers. It was also clear that the sport-diving community had no appreciable experience with rebreathers. 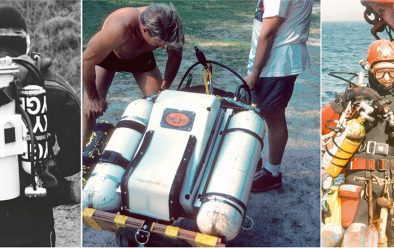 Martin Parker, MD of Britain’s AP Diving, with a prototype of the first production closed-circuit sport rebreather, the Inspiration; WKPPcave-diver George Irvine with an early Halcyon PVR-BASC aka ‘The Fridge’ semi-closed rebreather; Leigh Bishop preparing to dive in 1993.

The forum recommended that instructors own, or have on-demand, access to the units on which they planned to train divers. At that time, agencies were selling rebreather instructor certifications, but the instructor didn’t have to own a unit or have that much experience.

It was also recognised that the sport-diving community did not have a supporting infrastructure like the military’s, nor any retail support at that time. In other words, the community would be starting from scratch.

With regards to decompression, the only validated constant partial pressure of oxygen (PO2) tables at the time were the US Navy 0.7atm constant PO2 for nitrox and heliox rebreather diving.

Note that a closed-circuit rebreather is designed to maintain a constant PO2, called a “set point,” throughout the dive.

It was unknown at the time whether simply reprogramming a dive-computer to calculate decompression based on the oxygen levels supplied by a rebreather would work effectively.

The forum asserted that third-party pre-market rebreather testing was critical to ensure reliable and high-quality products. It also concluded that the use of full-face masks and/or mouthpiece retaining straps, which were standard in military diving, and adherence to the buddy system could improve safety.

In addition, the forum noted that the development of on-board CO2 monitors, which didn’t exist at the time, could greatly improve diver safety, and the community was advised to adopt

a maximum constant PO2 of 1.3atm, similar to the US Navy.

The tech community was still arguing how high divers should run their PO2 for the working portion of the dive on open-circuit trimix dives. Dr Bill and others argued that a diver’s PO2 should be kept at 1.4atm during the working phase of the dive and boosted to 1.6atm for decompression, which eventually became the standard.

Safety was viewed as the biggest challenge in adopting rebreathers for sport diving. As Billy Deans noted at Rebreather Forum 2.0: “The challenge is going to be bringing the technology to market without killing too many divers in the process!” It would be another decade or so before rebreathers became a common tool among technical divers.

To put this in perspective, on average there are about 100-120 scuba-diving fatalities annually in the USA, Canada, UK and the rest of Europe combined, which represents the majority of the worldwide market.

Since 2012, the evidence suggests that rebreather diving safety has continued to improve.

Despite the early controversy and initial high incident-rates, technical diving eventually found its stride and, through improved training, the development of standards, and experience, was able to significantly improve its safety record.

In doing so, it greatly expanded our underwater envelope and knowledge, as Dr Bill suggested in his insightful article Call It High Tech Diving, which ran in that first issue of aquaCorps in January 1990: “With all these warnings issued, and all the described parameters met,

advanced high tech diving offers the prepared knowledgeable diver a chance to experience a realm not previously accessible to humans,” he wrote.

“And there is every reason to think – as our technology and knowledge advance – that we will be able to push the envelope even farther.” And we did. 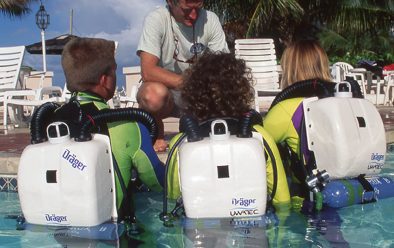