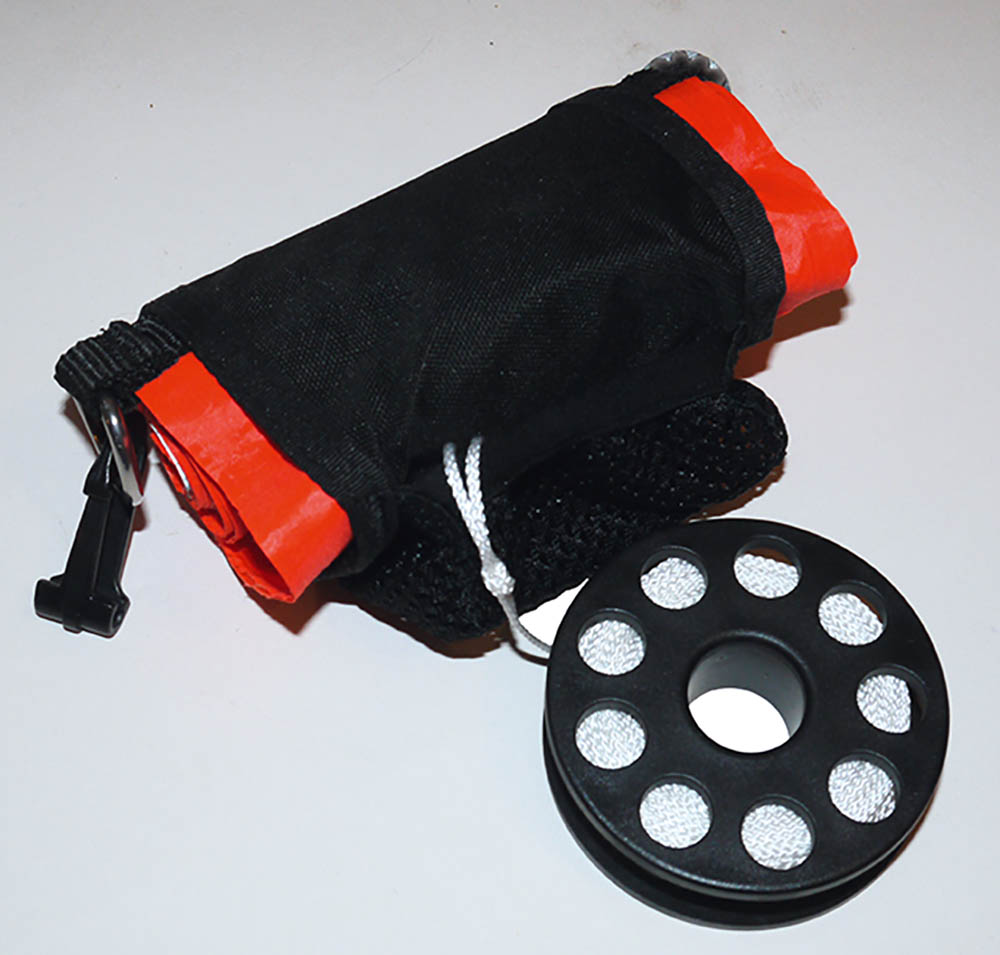 MY SECOND ARTICLE FOR DIVER, in 2003, was a feature about divers who had either got separated from their boat or, even more scarily, had simply been forgotten by the crew and were left behind.

I tend to dive on the assumption that I can handle the underwater part of the dive, and mostly, though not always, that’s how it works out. But I do have concerns about having no real control over my boat-cover.

Along with listening to and following the rules set forth in dive briefings, one of the most important things you can do to stay safe is to make yourself visible to the boat-crew.

When I began boat-diving seriously, in the mid-1980s in Gibraltar, the custom was to tow a marker buoy that the cox’n could follow throughout the dive.

It’s a good system in that the driver always knows where the diver with the buoy is, but it’s not great if the divers separate from the guy with the float, or they tie the buoy to the wreck, then go off exploring. It’s also exhausting to tow an SMB against current..

The Theory of Delay

These days it’s far more common to use a delayed SMB, sent up before you surface to indicate that you have begun your ascent, and to indicate your location to your boat-cover.

However, DSMBs require care to use safely. One of the main risks is becoming entangled in the line as you inflate it, meaning that you are now attached to a balloon that could have as much lift as your BC.

This can happen when you get preoccupied trying to feed air from your second stage into the bag, and the line catches around the reel or spills over the spool and jams it, or loops around you or your dive-kit.

If you let the reel go, the boat-cover knows only where the buoy is, not where you are. This is why I carry both a main and a back-up DSMB.

If you don’t, or can’t, ditch a runaway DSMB, you could well go shooting to the surface, followed by a side-trip to the chamber.

If you can let go, a second DSMB can be deployed, so you don’t have to choose between immediately surfacing to raise the alarm and missing safety or deco stops, or doing these without the safety factor of being visible to the boat while you drift.

To make inflating DSMBs easier and reduce the potential for mistakes, Mares has designed a buoy with an inflator that works from a standard direct-feed hose.

It’s important to emphasise that at no point is the direct-feed hose actually connected to the bag, the way it is to a BC or drysuit.

This is the first DSMB with this inflation method that I’ve tried, and I found it very efficient. But it is only one of three ways in which you can inflate the DSMB.

It can also be inflated by mouth, with the direct-feed connection doubling as an oral inflator, or by holding your second stage under the gape at the bottom of the bag in the usual way.

You can also inflate the bag at the surface, so it can be used as a tow-around marker buoy, or thrown overboard to mark a position, for example. There’s an automatic over-pressure relief valve with a pull-cord for manually dumping the air from it after use. This easily unscrews to let you quickly drain any water from the tube.

The tube is 180cm high by 14cm wide. Along with having “Diver Below” printed on it, it also has a wraparound reflective strip at the top.

A plastic finger-spool and double-ended bolt-snap are included. These pack into a small mesh pocket, closed with a touch-fastener, at the bottom of the buoy.

The idea is to keep everything neatly together until needed, hence the description “All in One”.  A clip and D-ring let you hang the buoy from your BC. There’s only 20m of line, a compromise for using a small, easily stowed spool.

I prefer to send up my DSMB from the seabed, before I start my ascent, as I often dive in high-current areas so worry about how far I might drift before I can get the buoy to the surface, especially if I cock up the deployment (yet again).

I’d be very happy to use the Mares DSMB with a conventional reel as my main DSMB, or with the included finger spool as a backup. I really liked the simplicity of inflation with this design.

I would want to add a dedicated direct-feed hose for using it, however, because disconnecting your BC or drysuit direct-feed adds a faff factor that undermines the convenience of this model.

I was very much taken by the concept of the Mares All in One DSMB. It simplifies a sometimes difficult skill by reducing task-loading and, in my view, increases safety.