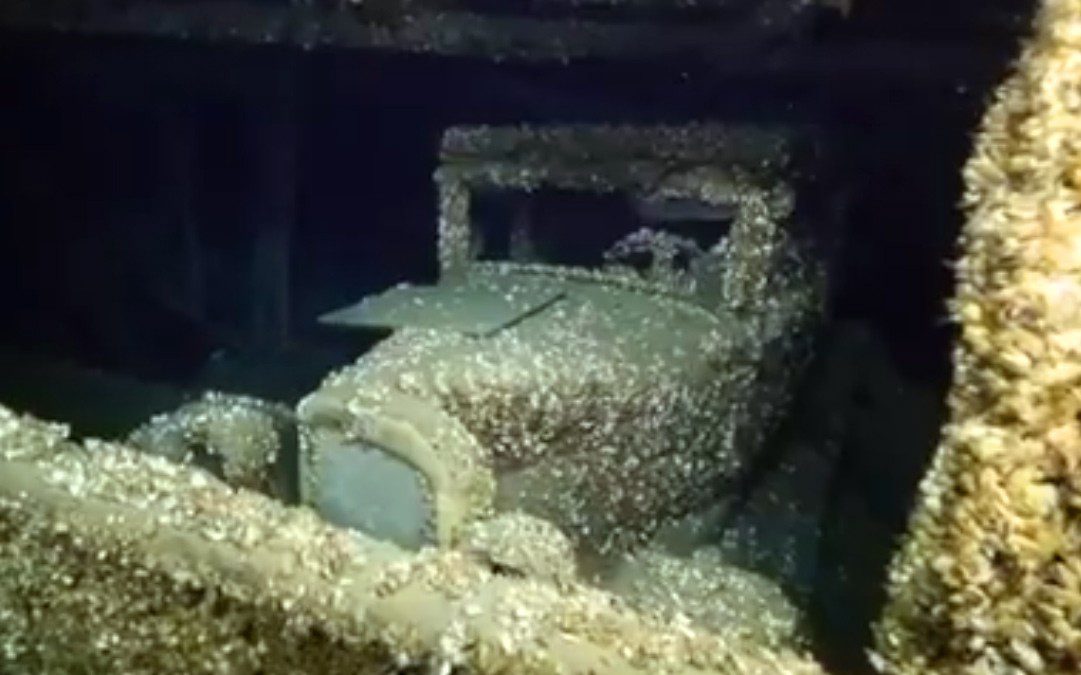 Chevrolet coupe on the Manasoo wreck.

It’s unusual to find an intact car on an ageing wreck, but in Canada’s Lake Huron scuba divers have located a 90-year-old vessel complete with a 1927 Chevrolet coupe belonging to one of the passengers.

Sixteen passengers and crew died when the Manasoo sank off Griffith Island in Georgian Bay on 14 September, 1928. Built in Glasgow in 1888, the Owen Sound Transportation Company steamship was also carrying 116 head of cattle, and it was their shifting in stormy conditions that was thought to have caused it to capsize.

Only five people survived the sinking – the owner of the car and of the cattle, Donald Wallace, and four crewmen who escaped with him on a lifeboat.

The name of the ship had been changed from Macassa when it was transferred the previous year from Lake Ontario, fuelling local superstition that changing names curses a ship – even though so many seem to survive serial name-changes without apparent ill-effect.

The wreck was located at a depth of 60m in “almost perfect condition” by well-known US lake-divers Ken Merryman and Jerry Eliason, working with Canadian maritime historian Cris Kohl.

The ship went down by the stern and, again unusually, was found sitting upright but with its stern deeply embedded in the silt and bow pointing upwards, well clear of the seabed. The wheelhouse was intact, complete with wheel and compass, and the divers also noted the fallen funnel, lifeboats still in place, the saloon, cabins and cattle pens.

Soon afterwards the same dive-team found another notable Lake Huron wreck at around 50m. The coastal steamer JH Jones had also been caught in a Georgian Bay storm but in 1906, resulting in the deaths of all 30 crew and passengers.

Accompanying the dive-team was Robert Crawford, the great-grandson of ship’s captain JV Crawford. Kohl’s research enabled the divers to locate the wreck within three sonar scans, and they found its hull and main deck intact, though the upper superstructure was missing. The JH Jones has now been designated a protected marine archaeological site.