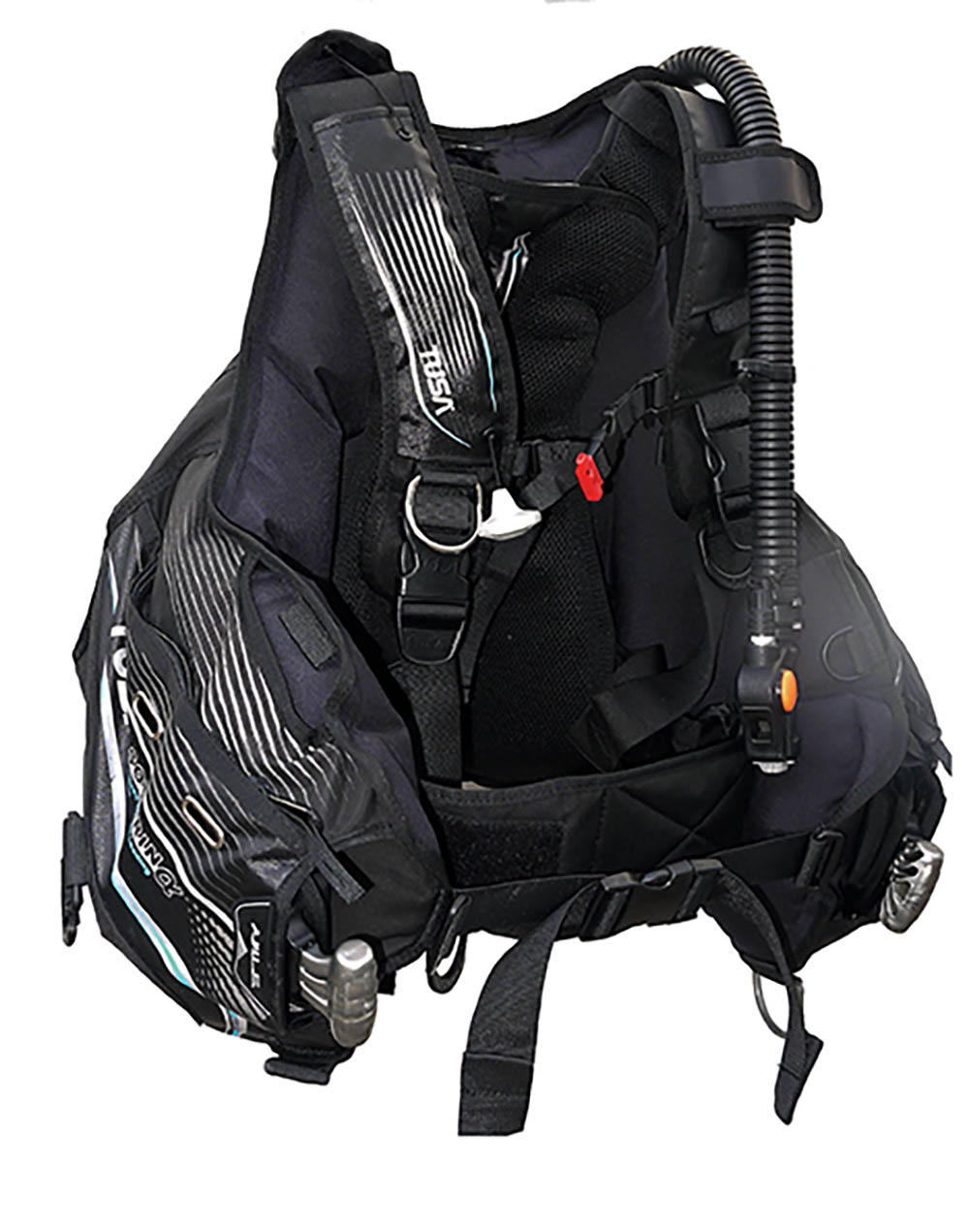 IF YOU REALLY WANT TO master precision buoyancy control and enjoy safer diving, it helps to own your own BC. The reasons have less to do with the BCs themselves than with the human factor.

While some BCs are, as successive divEr Tests have revealed over the decades, better than others, it’s discomfort and unfamiliarity with rental BCs that can prove most problematic.

We don’t dive as well as we could or enjoy our dives as much as we should when we’re distracted by an uncomfortable BC. Unfamiliarity with  controls can make us slow to react to emerging problems, such as failing to stop a descent beyond our safe depth with nitrox or preventing a runaway ascent, allowing problems to become emergencies.

So how do you choose a good BC for yourself?

It needs only to be comfortable, provide stability and have trustworthy safety features.

TUSA’s description of its BC0102 Soverin Alpha piles superlatives on top of jargon. Everything it says promises a superb BC, and every feature seems to have a hi-tec slogan to prove it. The “Advanced Weight Loading System” is outdone only by the “Ultimate Stabilising Harness”.

But how does this BC, aimed at single-cylinder recreational divers, measure up to TUSA’s claims? As divEr’s new Technical Editor, I’m a little embarrassed. A fault-free review looks bad and smacks of foul play and partiality. So let me start by saying that I didn’t much care for the manual.

We won’t be diving with the manual, however, so let’s quickly move on to see how the BC fared.

For a properly weighted diver, the BC0102 should provide enough lift for coldwater wet- or drysuit diving. It uses a single-bladder design made from 500-denier Cordura, an extremely durable material. It’s a stabiliser jacket with breakaway shoulder-straps and flotation split between channels that run alongside your tank for underwater stability and around the waist for surface flotation. This is the most popular style of BC among sports divers.

When you own a BC, you never again face being the small guy wearing the XL rental BC because that’s all the dive-centre had left. With the BC0102, selecting the right size, based on your build, is the rough choice – the fine adjustment is done by adjusting the harness webbing at the back of the BC.

This means that you don’t end up with excessive amounts of spare webbing in front, which would make it difficult to tighten the cummerbund or waist-strap sufficiently to get a snug fit. Even if a budget rental BC has this much adjustment, there’s rarely time to customise the fit on location.

Along with the shoulder-straps and waist-strap there is a chest-strap. This has two height positions, which can help avoid interference with drysuit inflators. A small whistle is integrated into this strap, and all the straps use conventional pinch-clip releases.

The BC0102 routes its straps through loops on the bladder, but they actually attach to the backpack, so the harness isn’t really influenced by inflating or deflating the bladder.

The backpack is an alpine type that shifts much of the weight onto your hips. It is substantially padded.

I tested the BC in Gibraltar, where I was hosted by Dive Charters, its only professional dive-centre, and Gibraltar Sub Aqua Club, a BSAC branch. I did a lot of shore-diving, and this meant walks of several hundred metres, involving tackling steep slopes and climbing a lot of steps.

With an all-up dive-kit weight of more than 40kg, this is a pretty good test of a BC’s comfort, and the BC0102 did very well.

Under water, I really liked the harness. Once adjusted on the surface, there was no need to retighten it, despite using a thick coldwater wetsuit to depths of 30m.

Every BC I’ve ever owned has required me to adjust the cummerbund regularly, because they ride up on me – but this one didn’t.

The main role of any BC is to allow you to achieve neutral buoyancy and trim under water. The BC0102 is a weight-integrated BC, and I balanced it by placing most of the weight in the main waist-pouches, with two small weights in the rear trim-pockets. I used a 15l tank, which I dislike, as I’m only 5ft 8in and 15s tend to roll me.

This proved a very stable jacket. I could hang perfectly horizontally without needing any sneaky fin-movements to prevent rolling or pitching. The horizontal trim is important – it keeps you streamlined, reducing effort to swim and prolonging your gas supply.

It also means that you can work close to the bottom and, if you fin correctly, won’t raise a cloud of silt, especially inside wrecks.

For videographers and photographers, stability helps to keep a camera steady, and assists models in maintaining their poses.

The plastic backpack incorporates a large top handle. A height-adjustment strap loops over your tank-valve and ensures that your BC sits in your preferred position on your cylinder.

The camband is a joy to use. Normally these have to be unthreaded and slackened off to fit to a new tank, but TUSA’s doesn’t. Once you’ve set it for the diameter of your cylinder, you won’t need to unthread and retighten it again unless you swap to a tank of a different diameter.

Usually cambands also require you to apply a fair amount of force to close the over-centre lever, but you won’t need to fight this buckle to flip it shut – it closes effortlessly. This is nice for anyone, but especially for younger divers or, perhaps, older ones with arthritis.

I was able to pack a popular 50m reel and full-size DSMB into one of the two zipped pockets, and a folding snorkel, current-hook, a couple of slates and a spool and full-size back-up DSMB in the other. As a test, I removed and replaced all of these under water while wearing gloves.

There are attachment points for a knife (not included) above each pocket, and an array of D-rings. Two of these have clips, enabling them to be moved quickly to other mounting-points dotted around the jacket if you want to customise your accessory layout.

We live in cynical times. The CE mark is often held up as defining that a scuba product has been thoroughly tested against exacting criteria by wholly objective experts, yet some highly placed safety specialists I know are not convinced. So I examined the BC’s safety features in detail.

I began by testing the inflation and deflation controls. At 11m the direct feed filled the BC in just over 4sec. The push-button is progressive, speeding up inflation the harder you press, though the range is quite narrow.

So it’s very quick to let you stop your descent, for example, while freefalling down a wall.

CE standards require that a BC can dump faster than it can inflate, to reduce the risk of a runaway ascent should the direct-feed stick open. I tested this by inflating at the maximum flow-rate, while keeping the shoulder-dump open, and the BC0102 passed this test, as it should.

I also wanted to test how quickly I could stop a runaway ascent. Holding onto some wreckage, I fully inflated the jacket and let go. Venting only through the shoulder-dump, stopping distance was less than 1m.

The TUSA also has a bum-dump, and both dumps are easy to locate by touch. A rapid exhaust on the oral inflation/deflation hose elbow is activated by pulling down on the mouthpiece. The dump-valves are very good at preventing water ingress.

The oral inflator is simple to use and has a mesh screen inside to prevent debris such as small pebbles entering the mechanism through the mouthpiece.

Most recreational-diving fatality victims fail to jettison their weights. The BC0102’s release system is similar to others on the market – pull the handles outwards and the weights are gone. I’m a big fan of this type of release, and have used it myself for more than a decade.

In an emergency, the side-weights can be dropped almost instantly and aren’t confusing to ditch for an assisting diver, though each pouch does have to be jettisoned separately.

The pouches can be loaded after your BC is on. An audible click confirms that they’re locked into place. The handles make it easy to hand the weights up before boarding a boat. The trim-weights are non-ditchable.

At the surface, I measured how far the fully inflated jacket would lift my mouth above water level. It was about 15cm, typical for a BC with this amount of lift and a comfortable height that, in normal diving conditions, should allow you to breathe through your mouth if you’re out of air and have no snorkel.

The height at which any BC will float you doesn’t depend only on the lift.

At the end of a dive a near-empty BC will float you higher, while a wrongly sized jacket, or being overweighted, or having a heavier cylinder mounted higher than mine was, or using a weighty regulator could cause you to ride lower than I did.

The BC0102 supported me vertically, so I wasn’t expending valuable energy fighting to stay upright.  Struggling against a BC that is trying to float you face down can quickly become exhausting and unsafe.

I wanted to see how fast I could remove the jacket in the water, either in an emergency or to board a small boat.

My best of three was just under 10sec.

I found it hard to find the chest-strap release, because I couldn’t distinguish it from the whistle easily through my 3mm gloves.

An owner will do better once familiar with the controls.

TUSA deserves credit for using hi-vis colours to make it easier for your buddy to quickly identify the inflate and deflate controls and the weight-release handles in an emergency.

You can get good neck extension and easily roll the victim to get a seal for EAR in the water for a casualty wearing the BC0102.

A lot of thought has gone into the BC0102 Soverin Alpha and I found myself impressed by its overall performance as well as TUSA’s attention to detail.

D-RINGS> Six, two of which are repositionable