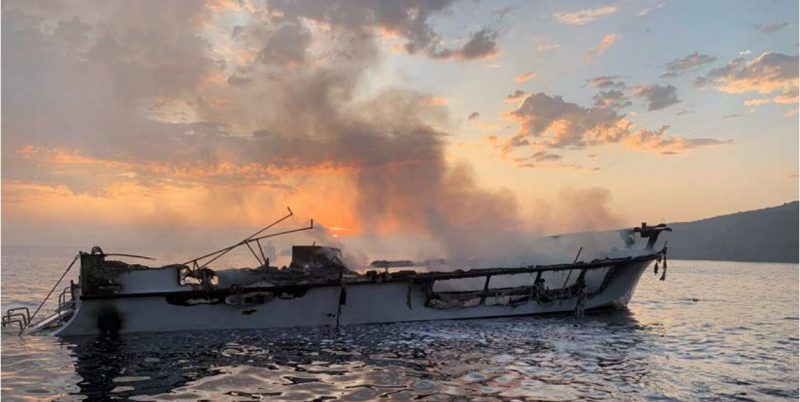 Jerry Boylan, the captain of the Conception, the Californian dive liveaboard on which 34 people died in a fire in September 2019, pleaded not guilty to charges of “seaman’s manslaughter” in a brief court appearance on 16 February.

The 67-year-old entered his plea before a federal magistrate judge in Los Angeles, with relatives of the scuba divers who died watching the proceedings over video links, according to a report in the LA Times.

Boylan was charged with 34 counts of manslaughter in late November, as reported on Divernet, with one count for each of the people who died – each count of which carries a maximum 10-year prison sentence. Boylan has remained free on bail pending the trial.

All 33 passengers and one crew-member had been asleep below in a single bunk-room with limited means of escape, while Boylan and the other four crew had been asleep above deck. There had been no roving nightwatch, contrary to US law, and the captain was said to have been responsible for failing to arrange fire training or evacuation drills.

The prosecution has stated that the captain “was responsible for the safety and security of the vessel, its crew, and its passengers” and had been charged on account of his “misconduct, negligence and inattention to his duties”.

Seaman’s manslaughter is a 19th-century law aimed at holding sea captains and crew responsible for maritime disasters to account. The families of all but one of the Conception victims have also filed legal claims against Truth Aquatics and its owners Glen & Dana Fritzler, who have also turned to an old maritime law to limit their own liability.