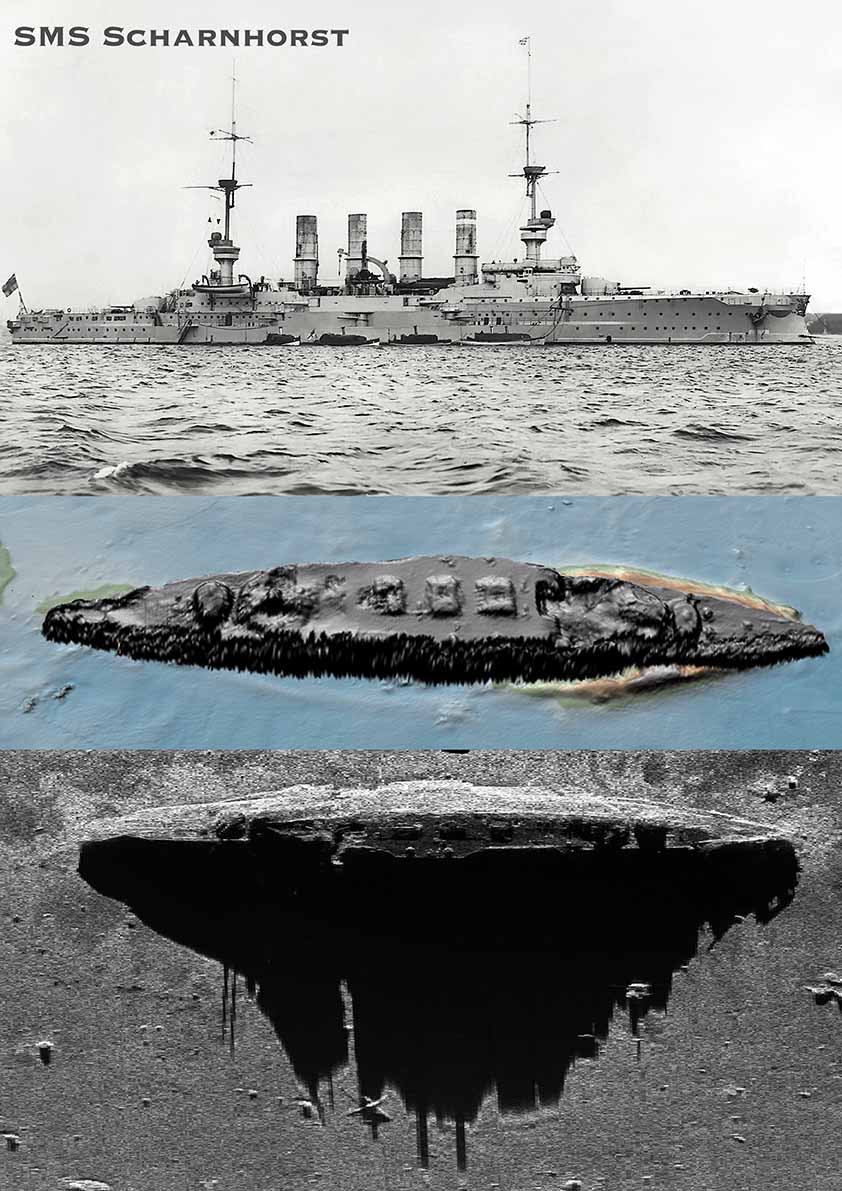 The wreck of the German armoured cruiser SMS Scharnhorst, the flagship of Rear-Admiral Graf von Spee’s East Asia Squadron during World War One, has been discovered  in the South Atlantic by British underwater archaeologist Mensun Bound. The discovery has provided new evidence for how the Royal Navy won 1914’s Battle of the Falkland Islands so decisively.

Bound’s expedition team, operating from the Ocean Infinity vessel Seabed Constructor, located the wreck at a depth of 1600m, about 100 miles off the Falklands. They were using a combination of autonomous underwater vehicles (AUVs) and an ROV sent down to obtain detailed video footage of the wreck.

The discovery was made in April this year, but Bound and sponsor the Falklands Maritime Heritage Trust managed to keep it secret from all but some descendants of von Spee until it was revealed at the premiere of a feature-length documentary film called Lost Ships: The Hunt for the Kaiser’s Superfleet.

This was screened simultaneously in London and the Falkland Islands last night (4 December) – four days before the 105th anniversary of the Battle of the Falkland Islands, one of the first great sea-battles of WW1 and one from which the German navy never fully recovered.

In a matter of hours a Royal Navy taskforce led by the Dreadnought battle-cruisers Invincible and Inflexible sank the Scharnhorst along with her sister-ship SMS Gneisenau and the lighter cruisers Leipzig and Nurnberg. The engagement cost the Germans 2200 lives, 860 of them on the Scharnhorst.

Von Spee stayed with his ship as it sank, and his two naval-officer sons Otto and Heinrich also went down with their ships. The British suffered only minor casualties.

The Battle of the Falklands, the only all-cruiser battle in history, was at the time Britain’s greatest naval victory since Trafalgar. It was also regarded as retribution for Coronel, an action a month earlier off the South American coast in which von Spee’s squadron sank three Royal Navy warships, with the deaths of 1600 British sailors. Regarded as the greatest victory in German naval history, it had also been the greatest naval defeat for the British for 100 years.

Following the Battle of the Falklands the British ships had been unsure of their exact location, making it difficult to find the wrecks later. From the end of 2014 Bound, who was born in the Falkland Islands, had spent five months trying to find them using side-scan sonar.

In challenging weather conditions he covered an area half the size of Wales but to no avail. He now knows that he came very close to the actual location of the Scharnhorst.

In 2019 Bound’s team dispatched six £12 million AUVs to cover the whole area zonally in five days. In the event, it was the first one down that found the Scharnhorst on the second day, though that was realised only later, after the AUVs had been recovered and their data analysed. The robots cover an area in parallel lines, and No 1 had passed over the wreck while turning.

The image made clear that an intact, upright wreck complete with impact crater had been found. However, later examination of the high-quality ROV footage revealed that the crest was missing from the bow, so the team could not be sure whether they had found the Scharnhorst or its sister-ship.

Detailed analysis of old photographs revealed that the position of the upper portholes in the hull differed enough between the two vessels for a positive identification to be made.

The video footage also showed that the main guns had been locked into position at their highest elevation before the sinking. On this evidence, it is now believed that they had been knocked out in the first salvos from the British ships, leaving them effectively “sitting ducks”. Smaller guns also remained in place, with the Krupp maker’s nameplate clearly visible on one barrel.

Mensun Bound became well-known for directing the excavation of a 6th-century BC Etruscan shipwreck off Italy’s Giglio island in the 1980s, and the Hoi An porcelain cargo in Vietnam in the 1990s, at the time the deepest hands-on excavation at 70-80m.

This year he was Director of Exploration for the Weddell Sea Expedition, tasked with finding explorer Ernest Shackleton’s ship Endurance, which sank under the ice in 1915.

The film Lost Ships is produced by TVT Productions in association with Polestar Pictures but there are no immediate plans to distribute it.