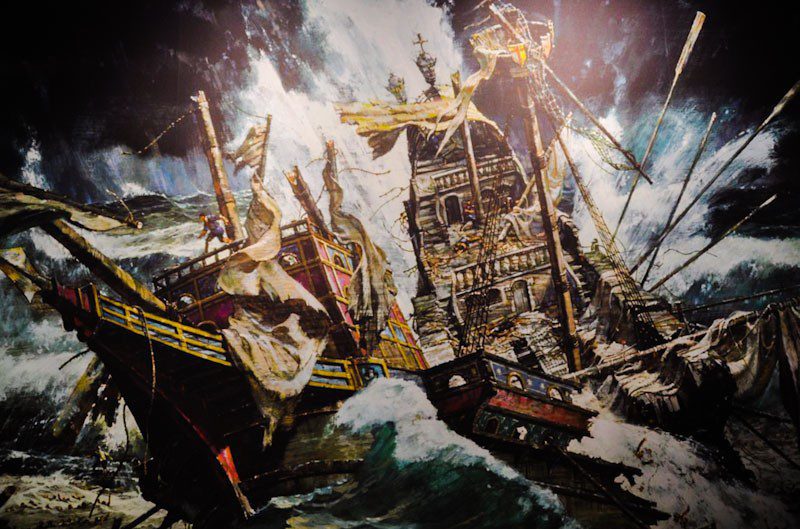 An investigation is under way in Northern Ireland following reports that scuba divers have removed artefacts from the protected Spanish Armada shipwreck La Girona.

A patrol boat has now been assigned to undertake regular inspections of the dive-site and that of the WW1 cruiser HMS Drake.

And with warm weather and calm seas said to be encouraging more divers into the sea this summer, Stormont’s Department of Communities (DFC) has issued a warning not to disturb either site, the only two of Northern Ireland’s 340 known wrecks to have been afforded special protection.

“Over the July holiday period the Department received a report of diving activity within the restricted area around La Girona and the removal of potential artefacts from the site,” says the DFC. “The Department is currently investigating this incident.”

The Spanish galleass sank off Lacada Point, Co Antrim in October 1588 with the loss of 1400 lives. In 1967/68 a Belgian dive-team located the wreck and salvaged the largest amount of Spanish Armada treasure to have been recovered at that time. Jewellery, coins, weapons and other artefacts can be seen at Belfast’s Ulster Museum.

Access to the wreck is restricted to licence-holders under the UK’s Protection of Wrecks Act. Other divers are expected to observe a 300m restriction zone around its position, which is marked on the Historic Environment Record of Northern Ireland map and Admiralty charts.

The armoured cruiser HMS Drake was the lead ship of her class and served from 1900 and in various capacities during WW1 before being torpedoed by the U-boat U-79 in Rathlin Bay in 1917, with the loss of 28 lives.

The wreck is a scheduled historic monument, making it an offence to remove artefacts without permission, but it does not require a licence to dive. Although largely demolished to make it safe for shipping in the 1970s it remains a popular dive-site, lying no deeper than 19m in usually good visibility.

A Department of Agriculture, Environment & Rural Affairs patrol boat has been assigned to keep both wreck-sites under observation this summer, and the DFC has urged divers to observe legal restrictions and to dive all historic wrecks on a look-don’t-touch basis. Anyone witnessing diving going on around La Girona is asked to call the police on 101.

The DFC has also issued a general request to divers to submit information, images or videos of  wrecks they have dived for its records.

Guidance on wreck-diving in Northern Ireland is available at Dive-NI.