What makes Triton Bay in West Papua so special? THOMAS HAIDER analyses the peculiar set of circumstances that make the area both a joy and a challenge for underwater photographers 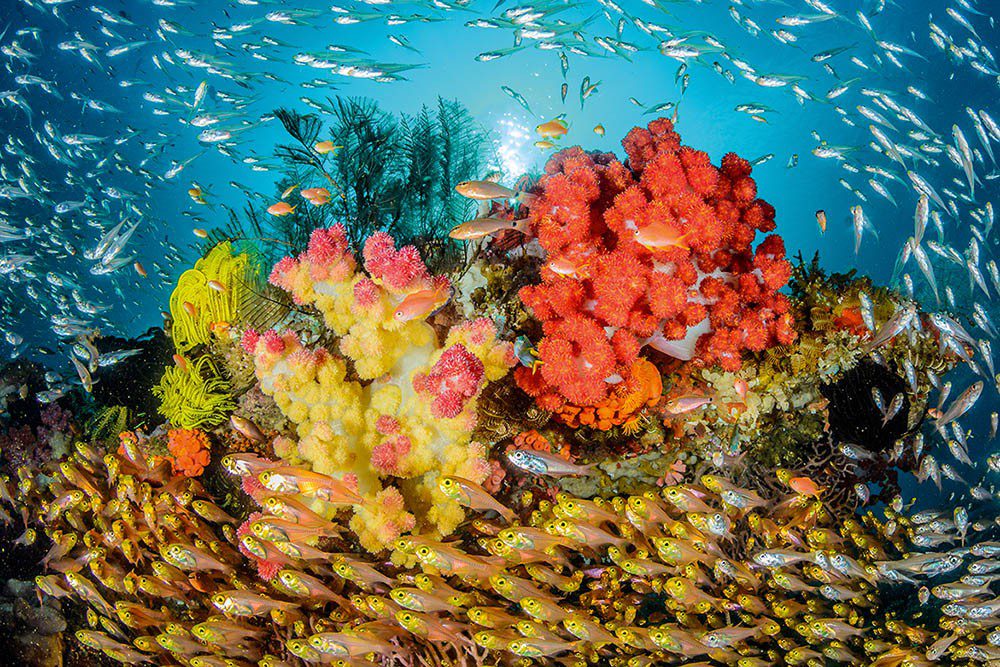 IN INDONESIA’S TRITON BAY the most impressive dive-sites are located around karstic rocks in the Iris Strait, a passage between Aiduma Island and the mainland of West Papua with its towering mountains.

In this funnel-shaped passage divers are always exposed to strong currents. but on the other hand the sites are often quite sheltered from wind and waves.

The calm sea surface may in addition be flattened by the currents, but the impression is misleading, because beneath the surface tremendous action takes place!

Delicate coral reefs are nourished by the currents. What would normally be sparsely populated surf zones are full of life. Every nook is covered with marine life of all colours and shapes, competing for nutrients, space and light.

Gigantic schools of anchovies and fusiliers stream over extensive gardens of rainbow-coloured soft corals and black-coral bushes with white polyps. These clouds of fish are under permanent pressure from hunting jack, constantly shifting and blocking the ambient light.

This frenetic behaviour seems to be infectious. Grouper, normally shy in the presence of divers, move around in midwater and lurk on top of the black-coral bushes in the hope of catching some fish.

This close to the mainland, the seawater is also affected by nutrient-rich river water descending from the mountains. This leads to reduced visibility and a shift through various cyan colour nuances from a blueish- to a greenish-coloured sea.

MEANWHILE, STRONG upwellings channel more nutrient-rich but cooler and clearer water into the strait. Strong seasonal variations in water temperature help to relieve the corals from stress and reduce the chances of them bleaching.

It’s this dynamic combination of the clear upwellings and murky river run-off that creates so many possibilities for underwater photography.

Underwater lighting moods cover the spectrum, from subtle, low-contrast pastel colours in the murk to saturated, full colours where the water is clearer.

When the gloomier water so frowned upon by some divers combines with sunlight, the rich colours and shapes can create an almost-psychedelic impression, akin to diving into some mystical wonderland.

Those black-coral gardens with the white polyps, and enormous schools of fish, provide Triton Bay’s signature impression, reminding me of the first white frost of a European winter but with swarms of fish rather than birds flying over the snowy forest.

These conditions and the exuberant underwater life offer a challenge to wide-angle photographers, but one worth taking up. Usually one would concentrate on a single subject isolated from the background, simplifying the message but losing information in the process.

But in this environment one has to try to transform the infinite chaos, which at first sight looks quite distracting, into a pleasant picture.

Be in the right place at the right time, and the schooling fish streaming around will add intrigue to the shot, while the glowing rainbow colours of the reef scenes add sparkle. Together they can create a multi-dimensional sense of space – the viewer’s eyes will linger over your shot, trying to absorb all that’s going on.

GIGANTIC SCHOOLS of baitfish are a rare sighting in the tropics, but not in Triton Bay. When the silverside activity is at its peak, local fishermen anchor in the Iris Strait with their bagans or fishing platforms, lowering the lifting nets at night to attract the little fish.

This in turn attracts bigger predators such as whale sharks. The bagans are often positioned inside small passages, and it’s easy enough to visit the fishermen and get attractive images of whale sharks in and out of the water.

Marine biodiversity in Triton Bay is second to none, and almost all the rare and elusive critters found in other parts of Indonesia can be seen there. The experienced eyes of the dive-guides, who often trained in Lembeh Strait, are well able to spot these cryptic creatures.

During my stay with Triton Bay Divers, guide Andi were able to find examples of almost all the pygmy seahorses so far described on one single dive.

We were also able to see recently discovered invertebrates, such as the hairy shrimp and green shrimp.

One highlight occurs at a dive-site on the house-reef. The daily late-afternoon show is presented by the endemic Nursalim flasher wrasse (Paracheilinus nursalim), showing off its flamboyant courtship behaviour.

These flashings last only for a split-second during quick bursts of acceleration as various males harrass a female, which make it incredibly hard to photograph this dramatic courtship behaviour.

ONE AFTERNOON, the guide spotted within the courting clouds of male and female flasher wrasse a blue-ringed octopus. The wrasse were quite oblivious to its presence, so focused where they.

It was quite funny to see, and from an underwater photography perspective, certainly a case of species overload!

Triton Bay Divers, the only resort in this remote area, is a partnership between founders Leeza English (from England) and Jimmy Thai and the local Kamakaula family, which owns much of the land around Aiduma island.

The local connection allows guests to dive throughout the area, which is not the case for liveaboards. Often struggling to get dive permission, few operate there.

There are only four bungalows, set under coconut palm trees on the white-sand beachfront, and no jetty to disrupt the natural view. Leeza is full of passion and enthusiasm about fulfilling her dream of owning a diving paradise.

The diving is made very comfortable, with the two twin-engined dive-boats landing directly on the beach in front of the dive-centre and bungalows. There are very few steps from bed to diving.

Each bungalow has a little veranda, a very comfortable bed with mosquito net and a ceiling-fan. There is no air-con, but the beach is east-facing so doesn’t overheat in the afternoon, when the sun is behind the jungle mountain, and the fan is sufficient to provide a breeze. At night, it grew cool enough for me to need sheets.

FOR PHOTOGRAPHERS there is a table for camera maintenance and sockets for charging batteries in the bungalows. The outdoor bathroom has a hot-water shower – fresh water comes from a spring on the hill.

A chef from Manado spoiled us with plentiful freshly prepared meals, taking into account everyone’s preferences.

The fish in particular was cooked to perfection, and worthy of mention is a delicious liquid-chocolate cake, the sort of cuisine I would never have expected in such a remote area.

The combination of extraordinary diving and warm hospitality makes this location well worth a long journey. My thanks to Subal housings (subal.com) for supporting this photo-project.

GETTING THERE> Fly to Jakarta and on with Lion Air/Batik Air/ Wings Group or Garuda Indonesia to Kaimana (KNG) airport. Some flights transit in Ambon, others in Sorong. Garuda allows extra weight for dive gear

DIVING & ACCOMMODATION> Triton Bay Divers, tritonbaydivers.com
WHEN TO GO> Season mid-September to mid-June. The beginning and end are best for critter-divers as visibility falls and waters get cooler. Calmer, warmer waters from mid-November to late April.

MONEY> Indonesian rupiah. The resort does not have credit-card facilities but accepts euros or dollars.