Cheap and cheerful, that’s MIKE WARD as he assembles a complete set of travel-friendly dive kit and clothing that will weigh in at well under the magic 20kg, and all for less than a grand. How does he do it? Step inside… 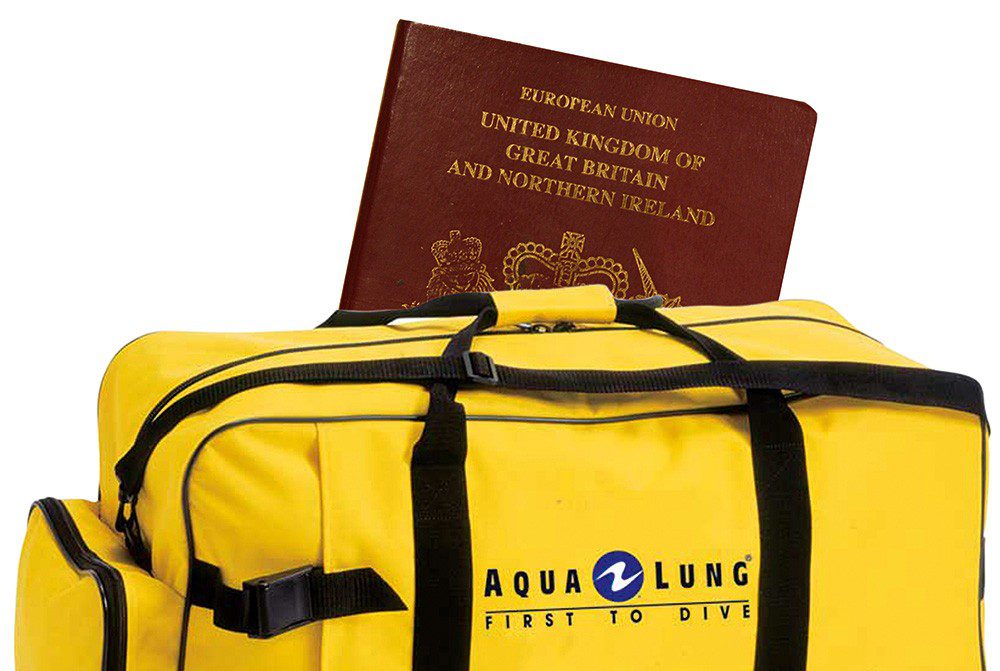 HAVE YOU NOTICED that diving holidays are creeping up in price? The average Red Sea liveaboard has finally climbed decisively north of the magic £1000 figure, and the further you go to get wet, the higher the price you pay.

So there’s the first part of the challenge, to keep a full set of spanking new diving gear south of £1000 so that you spend less on kit and have more money left to actually go diving. That’s everything you’ll need for a week of recreational diving and not just the big, obvious stuff – which means a suit, BC, regulator set, mask, fins, DSMB and reel, compass, dive-computer, torch and a camera, plus a bag to carry it in.

Back in the day, you could pretty much rock up with as much luggage as you liked, and a cheerful check-in person would smilingly hand you a boarding-pass without so much as a glance at the scales. Not today. In the past year or two I’ve seen people charged excess baggage at half a kilo over the limit permitted on that particular flight.

And that brings us to part two of the exercise, keeping the weight of your kit down so that you breeze through check-in and arrive in duty-free with your holiday spending-money untouched.

But before we get to the shiny stuff, brothers and sisters, let us consider clothing.

A week’s liveaboard means clothes for eight days, and I advocate a minimalist approach. Most overseas diving destinations are warmwater, so four T-shirts, four pairs of shorts and four sets of underwear will do, plus at least two, and preferably three, swimsuits.

Here’s the process. When you get up in the morning you don a swimsuit, T-shirt and shorts. After each dive you take off and hang up your swimwear to dry, changing into a dry set, then re-don the same shorts and T-shirt.

The few hours between dives will usually be enough for your swimwear to dry; the third set simply increases the available drying time between rotations, and guarantees that you sit down to lunch with a dry rump. Then, after the night-dive, you shower and assume proper undercrackers, with clean clothes every other day.

You may feel that a mere four sets of shreddies doesn’t meet the requirements of basic hygiene, but consider, you’ll wear your smalls only for two or three hours each evening before bed, so surely they’ll do for a couple of days.

If you aren’t convinced, it’s your excess baggage.

Oh, and here’s a tip for the boys. Wearing swim-shorts instead of budgie-smugglers will reduce the total number of pairs of proper shorts required, as you’ll need them only for the evening hours already mentioned. Be aware, however, that this strategy will limit the amount of thigh and buttock available for tanning, and so may not be acceptable.

For the record, I take four T-shirts, two pairs of shorts, three pairs of swim-shorts and four pairs of unmentionables, total weight 2.5kg.

On to the dive gear…

YOUR SUIT needs to be matched to the temperature of the water in which you’ll be diving, but we’ll assume a 5mm full suit. A ScubaPro Definition or Typhoon Vortex will cost around £150 and weigh 2.5kg or so.

These are not all-singing, all-dancing, top-of-the-range suits, but we’ll need to stay at the lower-priced end of the market to hit our budget. Don’t let that worry you, the kit will do the job.

TAKE BCs, for example. Every now and again (and I don’t mean for diver Tests) I’ve dived with borrowed equipment – usually well-worn bottom-of-the-range rental stuff – but it has always done the job.

The Oceanic EX100 at £199 and Seac Smart at £179 are at the budget end of their makers’ ranges, and I’d take either away for a week’s diving without a qualm. Either BC will add another 3kg to the packing.

MASKS COME IN all sorts of shapes, sizes and colours, but the choice pretty much boils down to your preference for a single- or twin-lens design. If you need correction lenses you’ll be drawn towards two lenses, but adding lenses adds to the price, so may I suggest contact lenses instead?

Enough daily disposables for your trip bought over the Internet will cost not that much, and weigh the same. Some divers have issues with contacts and find them irritating, but I never have. Maybe I’m lucky.  If you’re tempted, just try them at home first.

The Seac Sub One Mask is a twin-lens design and costs £20; the Mares Vento is a single-lens design for £16; and the Aqua Lung Sphera, my own mask of choice, is around £20.

To be fair, however, the most important thing about any mask is that it fits, and this is one piece of kit where you might need to go over budget.

NEXT, FINS, and I’m going to be controversial and suggest that you abandon your bootees and big, heavy, spring-strapped power-fins and consider using what we used to call pool-fins.

Yes, I know, full-foot fins simply don’t deliver the oomph you get from proper fins, but they are a lot lighter to pack, and a lot cheaper to buy. I’ve used a pair of Mares Plana Avanti full-foot fins (as opposed to Quattros) for years, and while they deliver nothing like the performance of the real thing I can recall only one occasion in more than 1000 dives when I needed more.

But then, I’ve often been accused of being just like a real diver, only in slow motion.

If I’ve swayed you, the TUSA Solla full-foot fins will set you back £42, or the Cressi Reaction Pro models cost £45. Pack your mask into a foot-pocket and it’ll get some protection for an all-in weight of 2kg.

NEXT UP IS A DIVE-COMPUTER, and finally we get to a category in which prices are actually lower than they used to be, while the instruments themselves are more capable.

It goes without saying that your computer should be usable with air or nitrox, and these days air-only computers are definitely endangered, if not actually extinct.

The Aqua Lung I300 costs £140, the Cressi Leonardo £150, the Oceanic Veo 2 £160 and the ScubaPro Aladin One £165. Any one of them will do the job, and will go in your hand luggage rather than eating into your weight allowance.

NOW, A TORCH for your night-dives, and I’ll let you into a secret told to me years ago by a dive-guide in Egypt. In warm, clear, blue water at night, a big light is counter-productive.

A smaller torch lights up a smaller area, so you move more slowly and end up seeing more.

Something like the little Princeton Tec 40 at £20, the Intova ICOM at £35 or the Northern Diver Fusion X4 at £40 will be absolutely fine. Promise. Pack the torch wrapped in a pair of shreddies in your other fin-pocket. Weight 200g.

CAMERAS USED TO BE for the dedicated, but these days you’ll stand out from the crowd if you don’t have one, so I’m going to be a bit naughty here and suggest that you look on ebay for the SJCam SJ4000 action camera. It’s a Chinese made GoPro clone that will set you back around £55, including a spare battery.

It isn’t as good as a GoPro or a Paralenz, but it’s not that far off. Just make sure to get a genuine SJCam, not one of the even-cheaper knock-offs masquerading as this little sleeper, and be prepared to spend another fiver on some colour-correcting filters and do a little work in post-processing and you’ll be amazed. Carry the camera in your hand luggage. 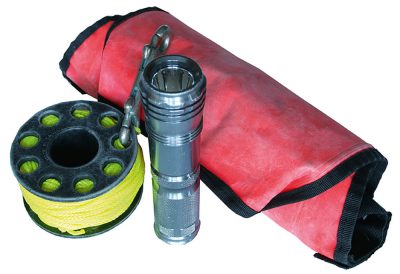 NEXT, DSMB AND REEL. I know people buy small DSMBs for use on holiday, and some folk just use a few metres of line wrapped in the blob, reasoning that they’ll only be sending it up from the safety stop if they use it at all.

But in real life the wotsit can hit the spinning thing as easily in blue water as it can in the Channel, so I suggest a proper DSMB, and saving weight by using a finger-spool. The classic AP Valves self-sealing SMB will cost around £32 and a spool with 50m of line another tenner, adding a combined weight of 500g to our total.

TALKING OF SAFETY, a compass is another item often neglected by bluewater divers lured by the increased vis. But, again, 50m of vis isn’t much when you’re lured from the reef by sightings of large pelagics.

Compasses come in many varieties, from the tiny Suunto Clipper intended to fit your computer-strap and costing around £12, to large wrist-mounted instruments from Mares and ScubaPro at £50.

I liked the Miflex bungee compass, because straps wear out over time, and I end up using bungee cord anyway, so why not start where we’ll end up? £46 and 200g.

LET’S DO REGS NEXT, and I suggest you see the note about BCs, as it applies equally well to regulators for recreational diving.

Note the words “recreational diving”. And make sure you buy your chosen regs with a DIN fitting. Totally ignoring the argument about DIN fittings being more secure and less likely to fail, I’ll just point out that DIN fittings are much lighter than A-clamps.

Your reg set will eventually comprise a first stage, a primary second stage, an octopus second stage and a contents gauge, and all the online retailers know that, so they do packages.

A Mares R2S Rover package can be had for £199, a ScubaPro Evo with R195 and R095 second stages and twin console for £255 and an Aqua Lung Core Supreme with Core octopus and gauges for £299, for example, and will add around 2kg to your packing.

Incidentally, two-instrument consoles seem stuck in the 1980s, and offer a contents gauge and depth gauge, the latter irrelevant because you’ll use your computer. When you buy, ask if the retailer will swap the depth gauge for a compass.

If the answer is no, get the compass.

AND FINALLY, THE BAG. Your lightest  and cheapest option will be a soft bag without wheels or frame. I use an old US Divers bag I’ve had for years. It originally had a big zipped fin-pocket on the side, but that came unstitched a long time ago to leave just the main bag.

It weighs a kilo, including a brightly coloured luggage-strap and a small padlock. The Aqua Lung Classic Duffle Bag is a similar piece of kit for £40.

The plus side to this sort of bag is the light weight, but you have to carry it and it offers no physical protection. Fortunately, scuba-kit is pretty robust, but I rarely see another diver walking away from the carousel carrying a bag rather than wheeling it.

The Mares Cruise Roller Foldaway will set you back £100, the ScubaPro Porter £116 or the TUSA Roller Duffle £120. Just be aware that wheeled bags weigh more, and the heavier your bag, the lighter the contents need to be.

And I’ve rounded up the weights, because airline check-in scales seem to do the same, and ignored special offers, so shop around and you should be able to afford a bit more diving with your change.