MELISSA HOBSON wasn’t sure what to expect on her first fluo night-dive in Madagascar, but she was anticipating fireworks. Photography by DR SIMON J PIERCE 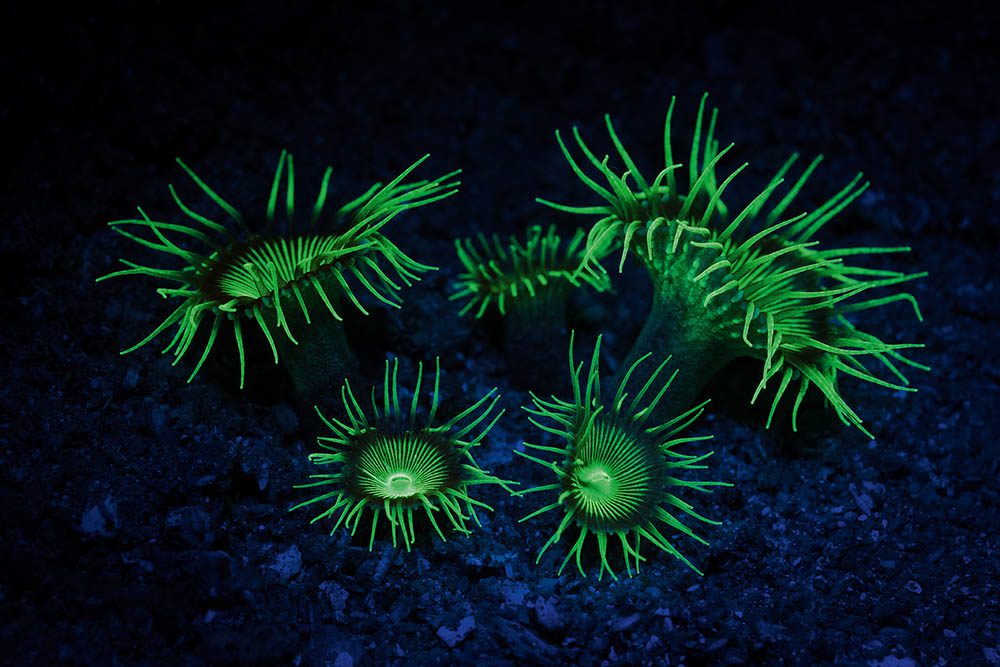 I HAD only ever seen the pictures – so alien that they seemed to be from another world – but, in reality, I had no idea what to expect. This made me slightly nervous.

I was on Nosy Sakatia in north-west Madagascar, about to embark on a fluo night-dive. That afternoon, I had visited the same site with Sakatia Lodge’s divemaster Jodie, partly for them to check my competency but also to see the difference in the reef from day to night.

I was assured that I’d hardly recognise it.

I’d first heard about the fluo-diving there from my friend Simon Pierce, who had recently returned from Madagascar buzzing about stepping (or swimming) into a scene from Avatar.

After just a couple of fluo dives, he had kitted himself up with all the equipment needed to photograph this phenomenon, and had filled his camera with bizarre biofluorescent creatures. Intrigued, I had to check it out.

Despite my excitement, I had heard that the bright, trippy colours and unfamiliar shapes on a fluo-dive could be disorienting, particularly at first.

I imagined having some form of bad underwater trip, not being able to recognise the foreign shapes or distinguish up from down. So it was with some trepidation that I arrived at the dive-school around sunset.

divemaster masha ran me through the briefing. Fluo, she told me, is a – relatively – new form of diving, so not as yet widespread.

Biofluorescence occurs when light is absorbed and then re-emitted at a different wavelength, making the object or critter in the middle of the process appear to glow. It’s different from bioluminescence, in which an organism creates and emits light through a chemical reaction, because a light must be shone on the subject for it to glow.

For us to see biofluorescence on a night-dive, we have to use blue-light torches (which results in the best underwater fluorescence but is also harmless to the animals) and slot yellow plastic filters over our masks (to eliminate the blue light).

Used together, they reveal the full effect of the fluorescence, showing the reef in an intense, magical new light.

“Their fluorescent emissions are invisible to us, and most predatory fish, but strobe their presence to other fish that share this adaptation.

“It’s like invisible ink – a secret way to communicate without detection.”

Biofluorescence occurs in more than 250 fish species, as well as hard corals, jellyfish, mantis shrimps, sea turtles and other groups, Simon told me. It's particularly common in cryptic species.

“Many coral-reef fish species such as angelfish have vivid colour patterns,” he said. “In contrast cryptics, such as lizardfish and scorpionfish, appear well-camouflaged. A recent survey found that 87% of these cryptic fish are biofluorescent, compared to only 9% of other fish.

“They’ve got the best of both worlds – hidden from predators, but gorgeous to each other.”

There’s still much we don’t know about biofluorescence and its role in the ocean. However, researchers have discovered that frogfish use fluorescent lures. “Wrasse use biofluorescent displays during courtship,” says Simon. “Triplefins use their red biofluorescent eyes to spotlight their copepod prey, whose eyes reflect the light but can’t see it themselves.”

If my afternoon dive had been coloured in carefully with crayons, was my fluoro night-dive going to look as if the reef had been scrawled on with fluorescent pens? That’s what I was hoping for.

the boat took us out a little way into the bay and we prepared to dive.

I took care to put my mask on strap-first, as Masha had showed me, so as not to stress or damage the (rather expensive) attached filter.

We jumped in and dropped onto the sandy bed, a little way from the reef. We were starting here – where there were only a few tiny critters glowing neon against the sand – so that I could orientate myself, but I later realised that it was all part of the carefully choreographed theatrics, starting small and building up to a vivid crescendo of colours.

Little circles of bright electric blue stood out against the dull seafloor.

As we got closer, a waft of water disturbed them and the tiny jellyfish rose off the floor and flitted away. One jelly. Another jelly. Two more. Our own private light show in the emptiness.

After some time following the trail of neon jellyfish, we started to come across small clusters of brightly glowing coral: orange, pink, purple, yellow.

As we approached, more burst onto the scene, gradually surrounding us. Colours that shouldn't exist together were plonked right next to each other, clashing proudly. Purple goo’ed into orange which, in turn, smouldered next to green.

Had I entered the world of Avatar? Maybe. But for me, the random splashes of colour had a budget space-age feel, as if a child had been let loose on a “futuristic” ’70s sci-fi set with neon paints.

our foreign galaxy was thick with aliens: impossibly green anemones tickling the black water, a purple anemone crab with vivid orange shell scuttling across the reef, and diminutive but dazzling shrimp shining from across the reef.

A scorpionfish scowled on the rock, red neon smeared across it. Its rouge was too extravagant for it to look so glum.

Tiny critters I would have struggled to see up close in the daytime were hard to spot from a metre away under my blue torch. Little sparks that would be easily missed in daylight called to us from the coral, and we moved slowly to examine them all.

Simon had explained the usefulness of all this to conservation efforts: “Over half the fish species living on coral reefs are those small, difficult-to-find cryptics,” he said. “Standard fish counts can grossly underestimate the true biodiversity. Most of those small species are biofluorescent, though, so they light up like a ’90s rave for divers with the right equipment. That leads to faster and better surveys.”

While much of the reef did glow, not everything fluoresces. Some critters gleamed only in places – as if accidentally drizzled in glow-in-the-dark paint – while others did not at all.

While I was intent on a ghostly green featherstar, a huge shadow skulked past. Shining my torch around, I could just about make out the dark outline of a large fish, but nothing more.

by the end of the dive we were right in the thick of the reef. The few dancing jellies on the seabed felt like another dive-site altogether – let alone the reef I’d seen that afternoon. 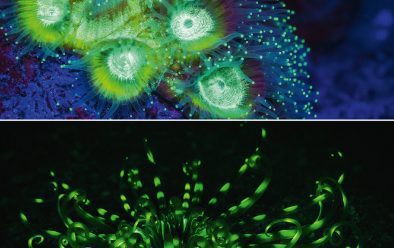 In this futuristic journey, shapes shouted at us from all directions. It was hard to know where to look: coral, sponges, shrimp, nudis, jellyfish – everything was bursting with colour as if trying to outdo its neighbour.

I’d been so overwhelmed by the fantastic display that I’d barely noticed the minutes whizzing past like shooting stars. We’d been exploring this underwater light show for nearly an hour, and it was time to return home.

As we began to ascend and leave this newly discovered universe,  the patterns fell further and further away until they were entirely out of view. After the assault of pinks, purples, greens and yellows, the dark water seemed eerily empty.

I hung midwater, checking how much time remained on our safety stop. Masha's torch glowed reassuringly a few metres away.

Another 30 seconds passed, and I looked up again. Darkness. Everywhere, total darkness. Startled, I looked up – nothing. Down – nothing. To my left and right too, the black was all-encompassing.

Had my mind started playing tricks on me? Had I drifted away? Or drifted off to sleep for a second?! There was no real current, and Masha had been right in front of me just seconds ago.

I looked around again: up, down, left, right. How had I ended up floating in this blackness all alone?

Spinning through 360°, I jumped as her blue torch beam came into view from where it had been resting in my blind spot.

Much to my relief, our three minutes’ safety stop was up and it was time to leave the darkness and return to shore.

As I jumped back on the boat, my fin hit the water and a galaxy of stars erupted. Tentatively, I splashed again.

A smattering of fairy dust danced momentarily. Indulging in the magic,

I sat on the platform at the edge of the boat, making a much larger faff of taking off my fins than was necessary and enjoying the resultant bioluminescent fireworks display in the water.

I could have played all night, but my goosebumps in the dark night signalled that it was time to call it a day.

As we sped back to Sakatia Lodge, where cocktails awaited us, the bioluminescence effervesced around the boat like flames from a rocket.

DIVING & ACCOMMODATION> Sakatia Lodge has a choice of 11 bungalows or villas, and its own dive-centre, sakatialodge.com 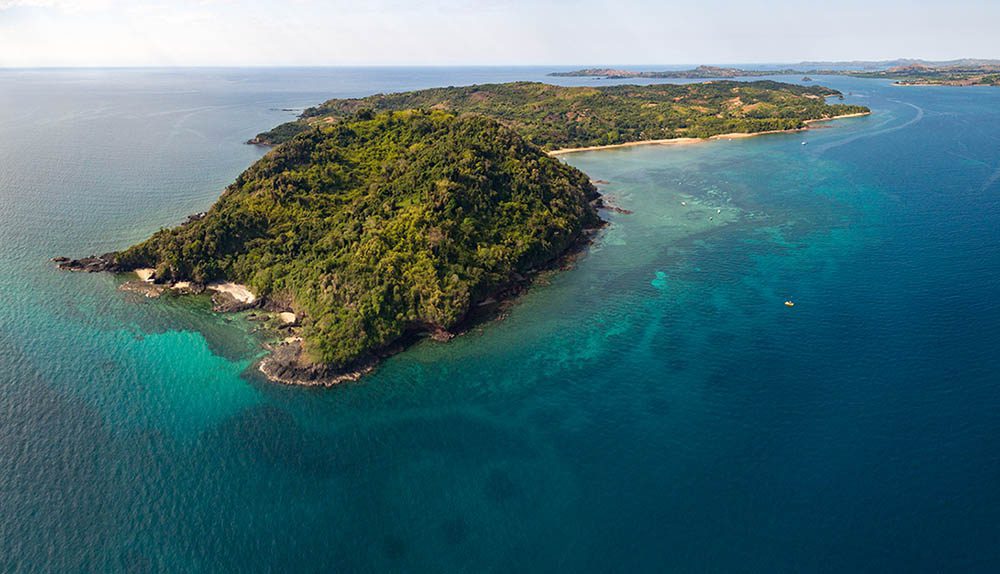 WHEN TO GO> Any time, but best time is October-December.

PRICES> Return flights to Madagascar from £580. Two-person bungalows from 58 euros a night, with daily half-board for an additional 24 euros pp. A 10-dive pack with all equipment costs 400 euros pp. A fluo night-dive costs 70 euros. 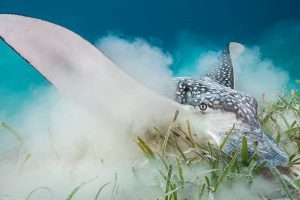 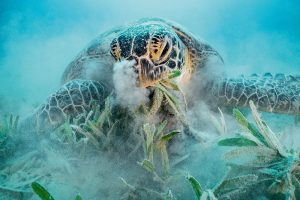 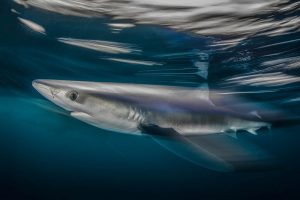 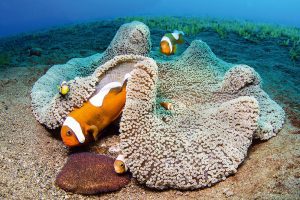 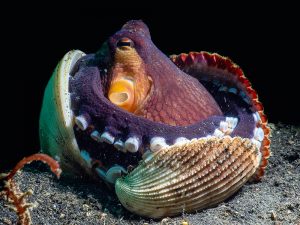