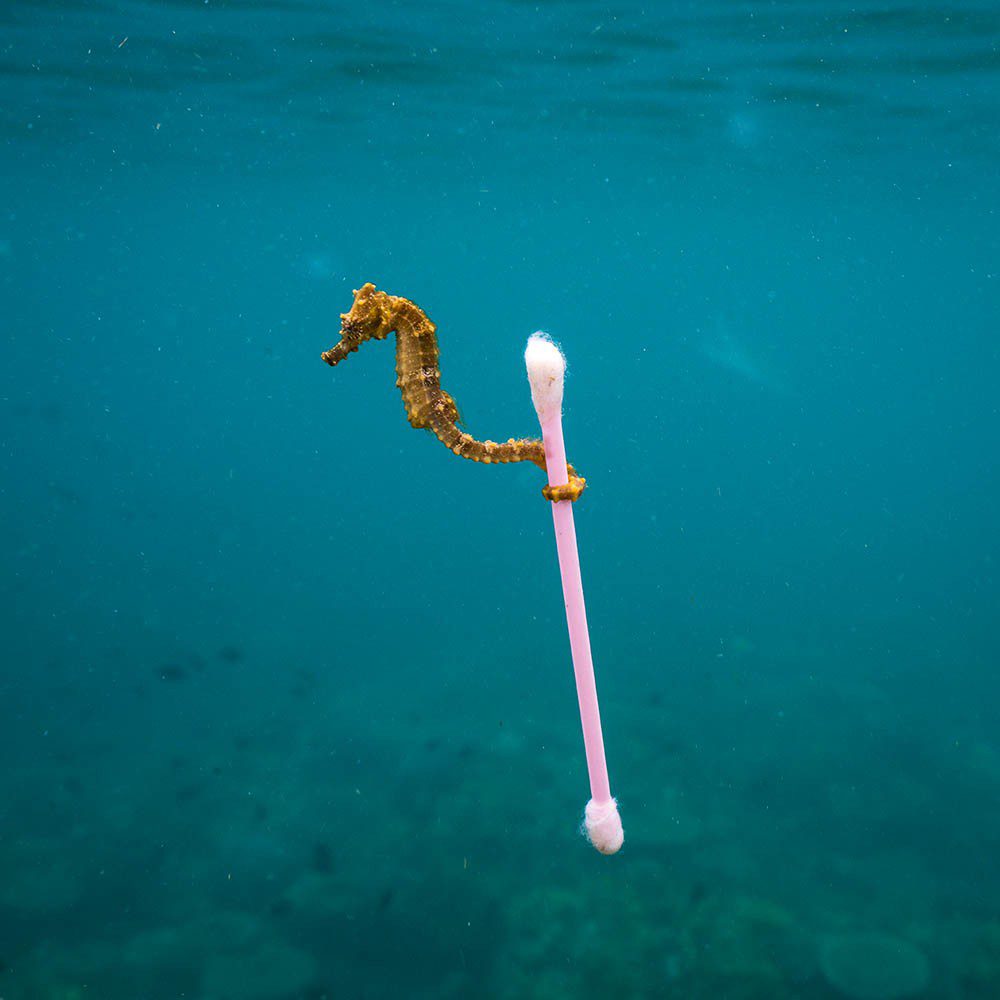 THE FIRST WILDLIFE PHOTOGRAPHER of the Year 2017 finalist images were revealed in September ahead of the announcement of the overall winners on 17 October and the opening on the 20th of the exhibition at the Natural History Museum (NHM) in London.

This is the 53rd competition, intended by the NHM to showcase the world’s best nature photography and photo-journalism, “igniting curiosity about the natural world while shining the spotlight on wildlife photography as an artform”.

This year’s competition attracted almost 50,000 entries from professionals and amateurs across 92 countries, and the finalists and winners are selected on the basis of creativity, originality and technical excellence.

On this spread we show four of the underwater finalists.

The NHM exhibition continues until next spring, but after the opening the images will also embark on a UK and international tour. Admission is from 10am to 5.15pm (open until 5.50), adult tickets cost £14, children’s £8, and they can be booked ahead at nhm.ac.uk/wpy

The 2018 competition is open for entries from 23 October to 14 December this year – to enter go to nhm.ac.uk/visit/ wpy/competition.html

Seahorses hitch rides on the currents by grabbing floating objects such as seaweed with their delicate prehensile tails. Hofman watched in delight as this tiny estuary seahorse “almost hopped” from one bit of bouncing natural debris to the next, bobbing around near the surface on a reef near Sumbawa Island, Indonesia.

But as the tide started to come in, the mood changed. The water contained more and more decidedly unnatural objects – mainly bits of plastic – and a film of sewage sludge covered the surface, all sluicing towards the shore.

The seahorse let go of a piece of seagrass and seized a long piece of clear plastic. As a brisk wind at the surface picked up, making conditions bumpier, it took advantage of something that offered a more stable raft: a waterlogged plastic cottonbud.

Not having a macro lens for the shot ended up being lucky, both because of the strengthening current and because it meant that Hofman decided to frame the whole scene, sewage bits and all. As he, the seahorse and the cottonbud spun through the ocean together, waves splashed into his snorkel. The next day, he fell ill.

Indonesia has the world’s highest levels of marine biodiversity but is second only to China as a contributor to marine plastic debris – debris forecast to outweigh fish in the ocean by 2050. On the other hand, Indonesia has pledged to reduce by 70% the amount of waste it discharges into the ocean.

The Insiders, by Qing Lin, China (Under Water)

The bulbous tips of the aptly named magnificent anemone’s tentacles contain cells that sting most fish. But the clown anemonefish goes unharmed thanks to mucus secreted over its skin, which tricks the anemone into thinking it is brushing against itself.

Both species benefit. The anemonefish gains protection from its predators, which daren’t risk being stung, and it also feeds on parasites and debris among the tentacles; at the same time, it improves water circulation (fanning its fins as it swims), scares away the anemone’s predators, and may even lure in prey for it.

While diving in Lembeh Strait in North Sulawesi, Indonesia, Qing noticed something strange about this particular cohabiting group. Each anemonefish had an extra pair of eyes inside its mouth – those of a parasitic isopod (a crustacean related to woodlice).

An isopod enters a fish as a larva, via its gills, moves to the fish’s mouth and attaches with its legs to the base of the tongue.

As the parasite sucks its host’s blood, the tongue withers, leaving the isopod attached in its place, where it may remain for several years.

With great patience and a little luck – the fish darted around unpredictably as they usually do – Qing captured these three curious individuals momentarily lined up, eyes front, mouths open and parasites peeping out. 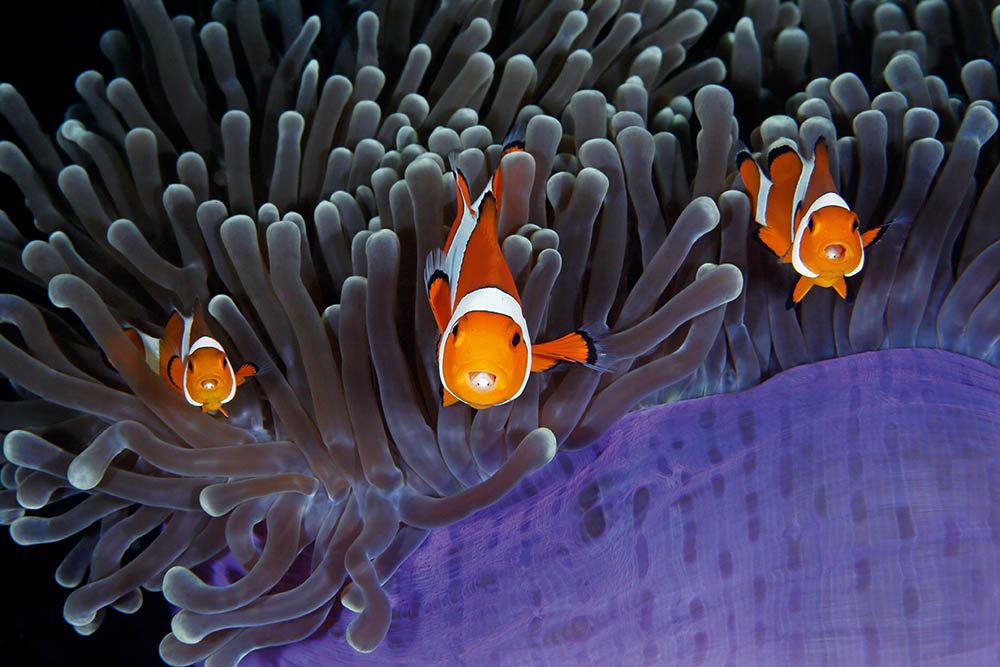 Romance Among the Angels, by Andrey Narchuk, Russia (Behaviour: Invertebrates)

Narchuk was on an expedition to the Sea of Okhotsk in the Russian Far East, and intended on the day to photograph salmon. But as soon as he jumped into the water, he found himself surrounded by thousands of mating sea angels.

Quickly swapping to macro, he began photographing the pairs, 3cm long and swirling around in the current. Sea angels are molluscs related to slugs and snails, without shells and with wing-like lobes used as swimming paddles. They hunt sea butterflies – swimming sea snails – using specialised feeding parts to prise them from their shells.

Each individual is both male and female, and in the photo they are preparing to insert their copulatory organs into each other to transfer sperm in synchrony.

One is slightly smaller than the other, as with most of the couples Narchuk observed, and they remained joined for 20 minutes. Both would go on to lay 30-40 tiny eggs after fertilisation.

It was late summer and peak phytoplankton time, so there would be abundant food for the resulting larvae. To photograph them mating, Narchuk had to battle strong currents and avoid a wall of gill netting, and when he was swept into the net and his equipment became snared, he was forced to make an emergency ascent – but not before he had got his shot.

Next day, not a single angel could be seen. 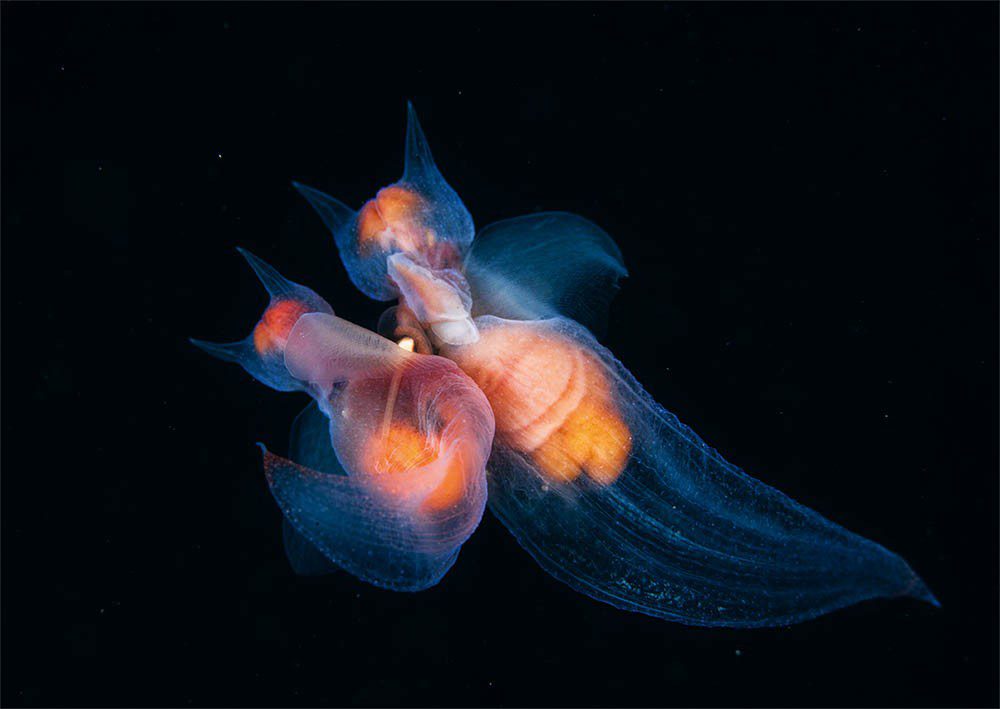 “We were still a few metres from the surface, when I heard the strange noises,” says Ballesta. Suspecting Weddell seals – known for having at least 34 underwater call types – he approached slowly. It was early spring in east Antarctica; a mother was introducing her pup to the icy water.

The world’s most southerly breeding mammal, a Weddell seal gives birth on the ice and takes her pup swimming after a week or two. The pair, unbothered by Ballesta’s presence, slid effortlessly between the sheets of the frozen labyrinth. Adults are accomplished divers, reaching depths of more than 600m and submerging for up to 82 minutes.

“They looked so at ease, where I felt so inappropriate,” says Ballesta.

Relying on light through the ice above, he captured the curious gaze of the pup, the arc of its body mirroring that of its watchful mother. 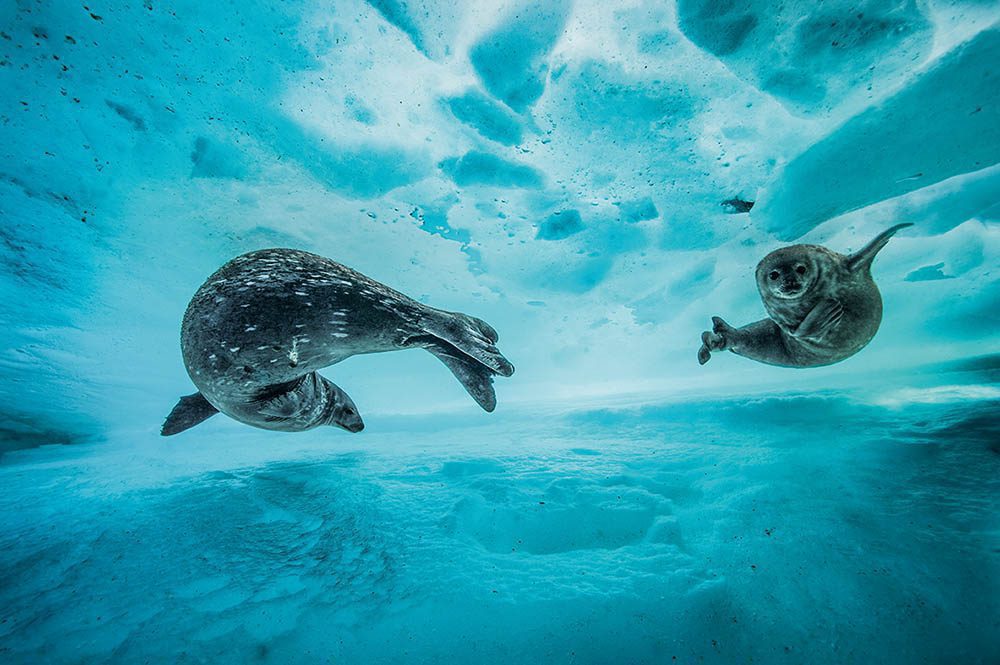