When great white shark corpses started turning up with their livers missing, it took a while to piece together the story – and now South Africa’s cage-diving operators are living in fear that their golden days are numbered. RICHARD PEIRCE has this exclusive story 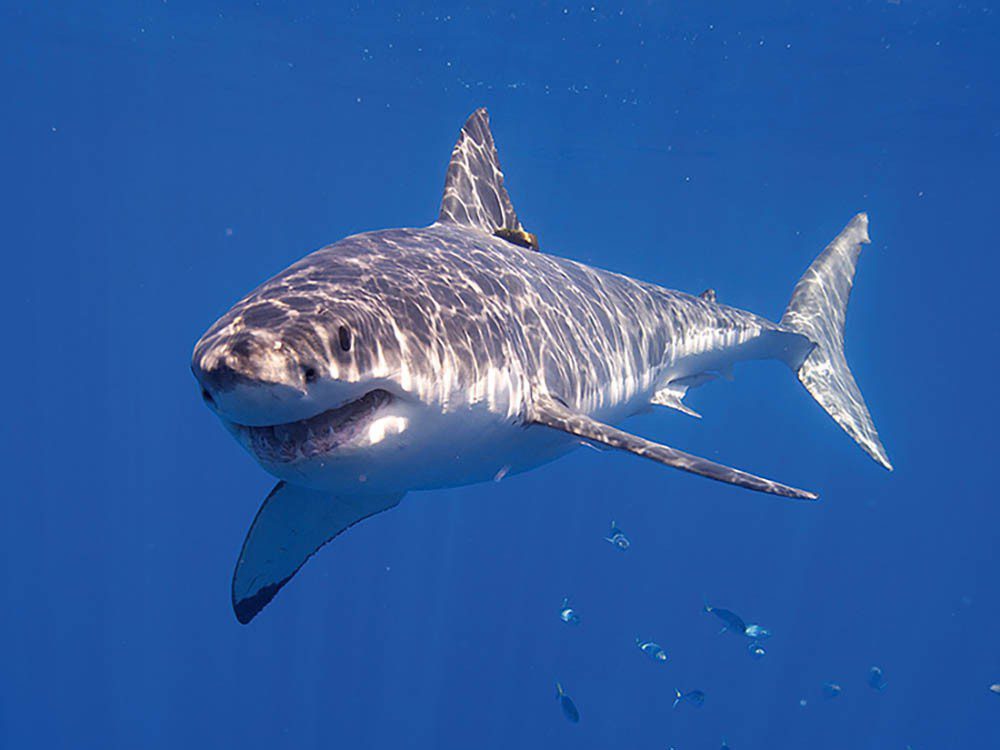 A great white shark as cage-divers love to see them. Photo: Elias Levy

IN THE 1975 FILM JAWS, the presence of a great white shark threatened the prosperity of a fictional seaside town called Amity. In real life in 2016 and 2017 the absence of great white sharks threatened jobs and businesses in the South African town of Gansbaai.

Cage-diving with great whites occurs in South Africa around Dyer Island (Walker Bay), in False Bay, and in Mossel Bay. Of the three, Dyer Island, offshore from the town of Gansbaai, is by far the most popular with local and overseas tourists.

This is the self-styled “Great White Shark Capital of the World”, with eight operators all doing up to three trips a day. They service thousands of tourists a year, and directly and indirectly provide hundreds of local jobs.

As well as the operators, restaurants, guest-houses, hotels, souvenir shops and others all derive benefit from great white shark eco-tourism.

Cage-diving around Dyer Island started in the late 1990s and has become a multi-million-dollar industry. The sharks were a money tree, and the good times were never going to end – until the sharks vanished!

Then the horrible reality sunk home that the leaves had all fallen off the money tree and been blown away.

In early 2016 the sharks disappeared for three weeks, and various theories were put forward to explain their absence.

In 2013 a pod of killer whales (orcas) had been seen in the area for the first time, with further sightings in 2015 and 2016. First a pod of six were seen, and then a pair of males with distinctive collapsed fins. The fin of one animal fell to the right and the other to the left – they were nicknamed Port and Starboard.

On 7 February, 2017, Port and Starboard were again spotted near Dyer Island, and the next day a dead 2.7m shark washed up on a nearby beach. The body was intact, but there were scratch-marks around its head.

At the same time, operators started noticing an absence of great white sharks and, as in the previous year, they didn’t return for three weeks.

For shark enthusiasts and the operators life went back to normal, until on 4 May a 5m female great white was washed up. The the scientists who conducted the autopsy revealed that her liver had been removed.

There was a large, neat hole in her belly between her pectoral fins, and when another shark was discovered the next day, this time a male, the wound was found to be in the same place, and its liver, heart and testes were missing.

Once again shark-sightings stopped, and there would be no let-up for the beleaguered town and its cage-diving operators, because on 7 May another shark was discovered less than 60 miles along the coast at Struisbaai. Once again, its liver had been removed.

The scientists doing the autopsies were convinced that the cause of death, and the removal of the livers, was due to predation by orcas, and Port and Starboard were the prime suspects.

The sharks appeared to have fled in terror when faced with a superior predator, and people in the Gansbaai area continued worrying about their livelihoods as, day after day, Dyer Island’s waters were empty of sharks.

Then the bodies stopped washing up, and each day hope increased that the sharks would return.

These expectations were dashed on 24 June, when dead shark number four was discovered on a beach with the by-now familiar wound in its belly, and no liver.

That same day Port and Starboard were seen and filmed patrolling the area. Fears for the future tightened their grip on the Great White Shark Capital of the World.

THE DYER ISLAND Conservation Trust (DICT) is a not-for-profit NGO, a sister organisation to Marine Dynamics, the largest of Gansbaai’s operators. DICT funded the recovery of all the dead sharks, the autopsies and other related research.

Wilfred Chivell is the founder and owner of Marine Dynamics and Dyer Island Cruises, and founder of DICT. At the time he said that the lack of great whites had had a massive domino effect on the local economy.

He alone employs 90 people, and Marine Dynamics also funds the research conducted at DICT to the tune of 1m rand annually. It covered the costs of retrieving the dead great whites, and flying in experts to assist with the necropsies.

DICT marine biologist Alison Towner believes it is unprecedented for there to be a rivalry between two species of apex predators, because their territory normally doesn’t overlap. “Definitely, this is the most extreme paucity of great white sharks on record,” she said.

Chivell continued: “I wonder if it’s because of something we as humans have done that has driven the orcas into this area. Did we take their food away with over-fishing? I firmly believe it is some pressure somewhere.”

Kim “Sharklady” MacLean, who has been working with great whites for 25 years, said: “Perhaps it’s global-warming that has destroyed the pack-ice in the Antarctic off which the orcas traditionally snatch-and-grab seals. The disappearance of the sharks has caused havoc. It has been very, very stressful”.

Brian McFarlane, owner and founder of Great White Shark Tours, has been in the business for almost 20 years. He has seen the local industry grow in leaps and bounds, particularly as film-crews visited South Africa and shared their great white footage with the wider global public, thus attracting more shark tourists.
“We have become the great white capital of the world because our sharks are so much more accessible,” he said.

In mid-July the first shark was spotted back in the area, and numbers slowly increased as a whole town breathed a sigh of relief. But are the good times back to stay, or will the great white capital have to learn to live with ups and downs?

Shark biologist Alison Towner has the final word on the orcas, but hopes she is wrong. “They’re around, they’ve become specialised feeders, and they will probably be back!”