A battleship, a liner and a cargo vessel, none of them less than 155m long or 64m deep, are the big three that make north-western Ireland a holiday magnet for technical wreck-divers like RICK AYRTON 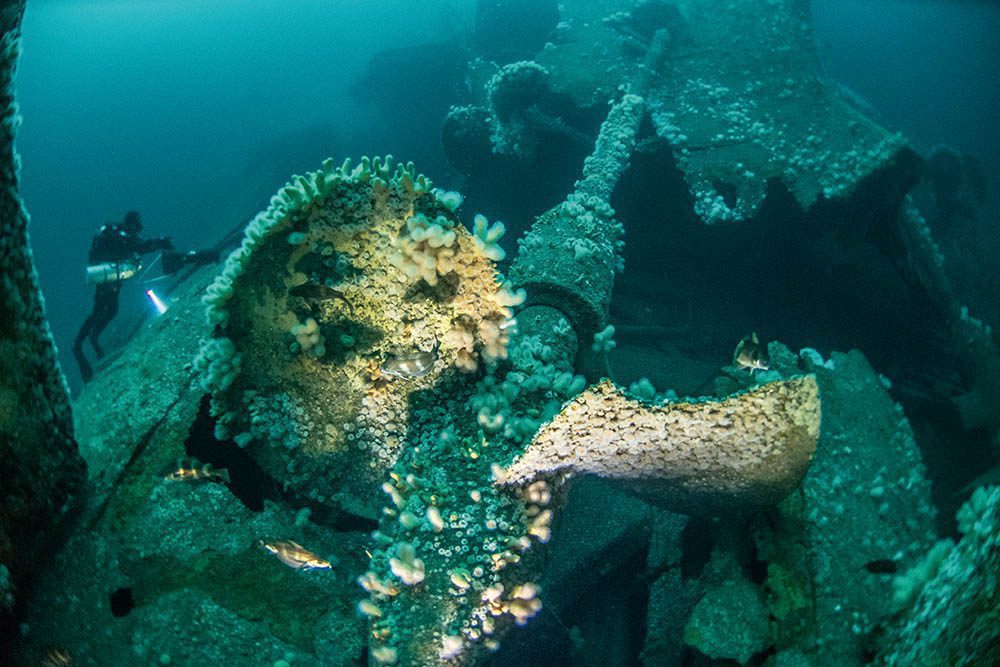 Propshaft on the Audacious.

EVER SINCE THE INTRODUCTION of nitrox and trimix, boundaries have been pushed in the field of wreck-exploration and discovery. In the early days it was diving deep air, later adding some helium accompanied by a selection of nitrox mixes for accelerated decompression. There were no suitable dive-computers; tables were worked out on a PC.

This allowed the pioneers to discover and explore some outstanding big wrecks off the north-west tip of Ireland – Malin Head in County Donegal.

This introduction of what we now know as technical diving has opened up a British Isles destination that ranks as one of the world’s best. The big change came in 1998 when the APD Inspiration rebreather was introduced, allowing unheard-of dive-times on these deep wrecks.

The wrecks are there because of the political turmoil that drove the world to two wars in the 20th century. They come from both conflicts, and have ended up where they are because of the geography of the UK.

The major ports of Liverpool and Belfast sent and received ships from North America, and still do. The North Channel between Ireland and that finger of the Scottish mainland the Mull of Kintyre was the route through which the ships passed, and U-boat commanders knew that rich pickings were possible for them.

I first visited the area aboard Loyal Watcher in 2004, and still remember the outstanding clearwater diving I enjoyed. No liveaboards visit this area any more, possibly because of the exposed position in which the wrecks lie. A skipper would have to be assured of several days’ good weather before travelling from Ayr or Stranraer, and many trips ended up not reaching Donegal, while others lost several days to poor weather.

So now we have to rely on shore-based day-boats to take us to the wrecks, because they can often find weather-windows where a liveaboard could not venture out.

The diving is in the open Atlantic Ocean, big swells are the norm and challenging conditions are possible. To make the most of a week in Donegal, you have to be prepared for this.

Arguably the most spectacular of the deep wrecks is that of WW1 Dreadnought battleship HMS Audacious. The King George V-class dreadnought was completed in 1913 – 182m long with a 27m beam, she displaced more than 27,000 tons when loaded. Power came from two Parsons steam turbines fed by 18 boilers, each turbine driving two shafts – four props in all. Audacious had a top speed of 21 knots.

The battleship was commanded by Captain Cecil Dampier when, out on manoeuvres on the morning of 27 October, 1914, she struck a mine laid by the German minelayer Berlin.

The subsequent rescue operation was mired in confusion. Plans to tow Audacious to safety came to nothing and she capsized and was left lying on the seabed. No crew were lost. One turret fell off the deck and landed near the rest of the wreck.

A deep wreck this big demands several dives to be seen in all its glory. Divers equipped with a scooter are able to take in the whole wreck in one dive, but I would argue that to really get to know Audacious, multiple dives are better.

In our week we were able to have two dives on the battleship, firstly on the upturned turret and bow and then on the stern. Everything about Audacious is on a grand scale, and the wreck has been the subject of many articles but I add my image above of the massive gun-barrels attached to their turret.

Less-documented is the stern section, but modern digital cameras have improved so much that their sensitivity in low-light conditions now exceeds anything once thought possible. This means that the magnitude of the wreck of this magnificent ship can now be better appreciated.

AUDACIOUS IS A HARD ACT to follow, but there are a selection of other wrecks that offer their own take on what a shipwreck should be like.

This includes a number of diveable U-boats that lie in the area around Malin Head. We planned to dive U89 from WW1, our most distant objective that week and the furthest from any landfall – meaning that it was blessed with some of the best visibility I have seen in the UK.

Commanded by Wilhelm Bauck, U89 was rammed by HMS Roxburgh on 12 February, 1918, with the loss of all hands. Today the remains lie in 65m, more broken than many U-boat dives.

The area behind the conning tower is exposed, revealing the diesel engines and a veritable pasta-bowlful of thick wiring. The disintegration allows for a more intimate examination of parts of the interior of a U-boat.

Two guns remain on the deck fore and aft of the conning tower. The bow is broken, with the torpedo-tubes lying at an angle on the seabed and providing homes for bright blue lobsters that seem happy to share with old munitions.

Returning up the shotline at the end of the dive, the scale of visibility was a treat to behold, enabling a view of almost the entire wreck.

I had joined a trip organised by Ireland-based technical dive-instructor Barry McGill with his  company In Depth Technical Diving. We were using Donald Cullen’s spacious and fast catamaran the Laura Dean, part of Mevagh Diving which also provided the B&B accommodation and has a gas-filling station.

Barry’s organisation was first-class, and everything was as you would expect of a premier-league technical instructor, admirably complemented by Donald and his crew on the Laura Dean. We lost one day to the weather during our week but were able to dive pretty much all the wrecks we wanted.

The 32,200-ton, 225m RMS Justicia was sailing under the White Star Line from Belfast to New York as a troopship when she was torpedoed by UB-64 on 19 July, 1918, though more torpedoes from UB-124 were needed the following day to send her to the depths.

Most of the crew had left Justicia, but 16 men were lost when she finally sank, after having been hit by no fewer than six torpedoes.

The wreck of such a large ship again demands several visits, but we had time for only one that week, so the rest will have to wait until another time. Donald had put the shotline just in front of the remains of the bridge and a short distance from the bow. Arriving at the wreck in 70m, visibility was again very good, though light levels made this a dark dive.

After a quick look at the bridge area, my buddy and I headed towards the bow. Massive winches stand proud over the deck, where collapse has occurred. I recall going in between the decks on a previous visit, but that would be a much more serious and difficult undertaking now.

I went over the top of the deck to the point of the bow to take the obligatory photo, lighting up the colourful anemones on the railings with my strobes. Further investigation of the massive starboard anchor followed, then we returned to spend more time examining the bridge, including the ornate pivoting portholes.

Those in the group equipped with scooters were again able to take in the whole wreck in the available bottom time.

It’s a different way of seeing the wreck, and listening to their descriptions made it clear that Justicia is worth several dives.

TIDE TIMINGS WERE very favourable that week, and a packed breakfast for an early start was needed only on one day. Mevagh Diving is based just outside the village of Carrigart, served by a hotel and a pub that both do good food.

The pub has a wood-fired oven for authentic pizza and we spent several evenings there after completing our prep for the following day.

Slightly further afield in Downings and closer to the boat moorings is the Singing Pub, also serving good food and in a great remote setting.

WW2 casualty Empire Heritage is yet another Donegal classic, much recorded by the technical-diving community with its famed cargo of Sherman tanks.

The ship was 155m long, and when I first dived the wreck I went to the stern to see its massive props, completely missing the tanks – something I was determined to put right.

This was made easy when Donald put the shotline right into the jumble of vehicles. I couldn’t have missed them if I’d tried.

My dive was spent travelling around the cargo hold and where the wrecked tanks had spilled onto the seabed, some on their side, others upside-down and few with intact gun barrels.

I suspect that these are easily broken off after spending years in the sea.

I was surprised to see the rubber tracks and also parts of the wreck standing very proud but somehow overlooked as the eye is drawn to the fascinating cargo.

One diver reported looking in through a tank-hatch and seeing a working compass still in place.

THE TRUE DONEGAL CLASSIC wrecks are the battleship Audacious, liner Justicia and big cargo vessel Empire Heritage, though others will argue that this list should be expanded if deeper dives are included.

Yes, there are plenty of others, but few match the scale, interest and history of these three. We had already dived the fantastic U89, but there was scope for another dive, and the steamship Roscommon was chosen.

I recorded a depth of 74m on this wreck, with some parts rising a few metres above this. It's what you might expect of an old ship that has been under water for 100 years, fairly flattened except for the bow, boilers and engine and stern.

What makes the Roscommon more interesting is its mixed cargo. There was obviously a lot of glassware, and in places the wreck is just a Greek wedding of broken glass and pottery.

Careful investigation can reveal some intact pieces, as well as more mundane items such as bales of slate roof-tiles.

The spectacular visibility we enjoyed made all the wrecks we dived special. Seeing properly what a wreck looks like and understanding why it has ended up that way adds greatly to the enjoyment of these dives.

The Malin Head area has classic wreck-diving that can compete with the best in the world, and a week exploring these wrecks is just not enough. Once visited, this exceptional destination will pull many divers back for more.

GETTING THERE> From the UK the Liverpool-Belfast ferry is a popular route to Donegal, but Rick travelled from Liverpool to Dublin on a truck ferry that also takes cars, with meals included, though having only one entrance/exit meant delays at either end. Both take eight hours. Driving to Carrigart from Belfast takes about three hours and from Dublin four hours. Divers flying to Belfast should check that any cylinders they are likely to need are available.