The Secrets Of The Sveti Pavao

Examining the seabed off Croatia, two scuba-divers discovered a well-preserved porcelain vase. Only the richest people, as it turned out, could afford such pottery in the 16th century. MARJAN ZIBERNA reports, main photography by ARNE HODALIC 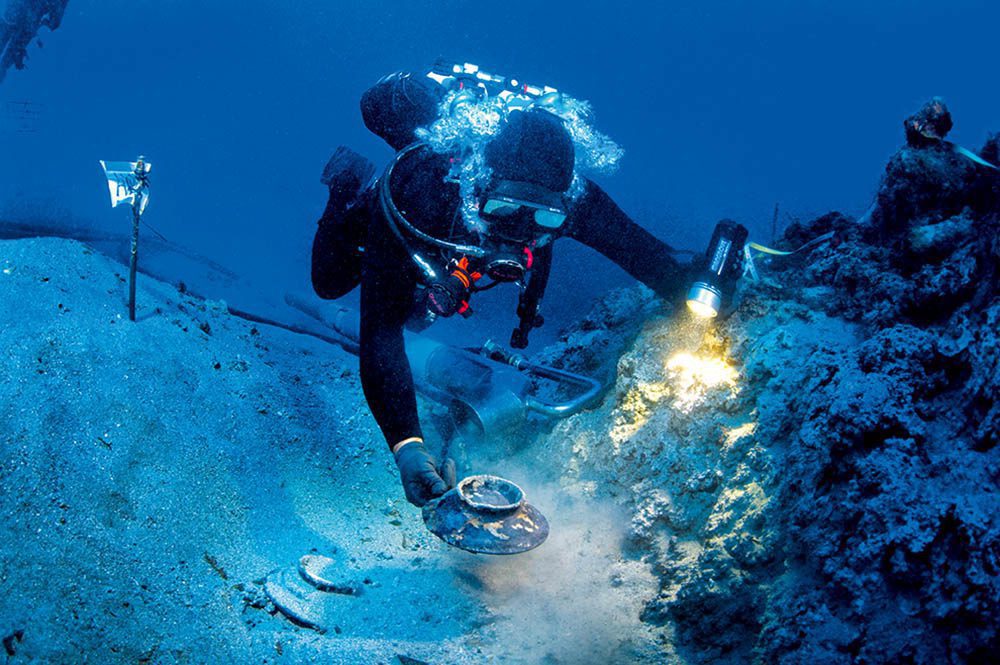 THE ADRIATIC SEA CONTAINS many shipwrecks, and diving them can be an exciting experience. It’s even more exciting when you dive a site that was previously unknown to anyone.

In the summer of 2006, two holidaying scuba-divers from Croatian dive-club Sava-Medvescak came across a vase among vestiges of an old shipwreck close to Mljet island in Dalmatia. At the time they had little idea of what an extraordinary discovery they had made, although their group’s leader, archaeologist Jurica Bezak, had an inkling that it could be important.

Bezak told his employer the Croatian Conservation Institute (CCI) about the discovery, and the following summer CCI experts, including Bezak, initiated a systematic examination of the site, and began recovering some of the items they found there.

They named it the “Sveti Pavao Shipwreck”, because it lay close to a dangerous underwater shoal of that name. The serrated rocks, set almost exactly at sea-level, were probably what had brought about the ship’s demise.

The wreck lies in the 40-50m range, so the divers’ work was laborious and difficult. At first it seemed to them that the discovery was that of a relatively unremarkable shipwreck from the 16th or 17th century.

As the work continued, however, it turned out that the vessel was most likely a Venetian merchant ship that had come to grief between 1580 and 1590, and that a substantial part of its cargo consisted of extraordinarily valuable fritware pottery from the Ottoman city of Iznik.

More than 100 examples of these ceramics have been found on the wreck and it’s a unique discovery – no other such ship has ever been found before.

IN THE 16TH CENTURY the city of Iznik, which lies 60 miles south-east of Istanbul, was the main Ottoman centre for manufacturing high-quality painted porcelain tiles. Its workshops reached their peak from 1480 to 1670, working under the patronage of the Ottoman court. Tiles were commissioned to decorate many of the most famous places of worship, including Istanbul’s famed Suleymaniye and Blue Mosques.

Iznik also produced a variety of plates, pitchers and cups that were highly appreciated, not only in the Ottoman Empire but among wealthy Europeans. They would be transported around the continent by merchant ships visiting major trade-centres such as Dubrovnik, Venice and Genoa.

However, only around 3000 specimens of Iznik ceramics are known to exist today, mostly owned by museums and some by private collectors. Very few examples remain in modern-day Turkey.

DIVING TO EXPLORE THE WRECK proved challenging from the start. “Maximum depth is 49m and, of course, if you want to work efficiently at such depth the only thing you really need is time,” says Arne Hodalic, one of the divers involved in the continuing project to explore the Sveti Pavao Shipwreck, working as a photographer to record the finds in situ. “To extend our bottom time and shorten the decompressions stops, we adopted a serious technical approach.

“Dives were limited to only one a day, and after four diving days we would have one day off,” he says. “We were producing our own nitrox 24 mixture, which was slightly above the recommended PO2 limit for such depths, though for experienced professional divers this shouldn’t be (and was not!) a problem. This mixture gave us a few minutes’ extra bottom time.

“A standard dive for each of the 15 divers involved in the exploration was not to exceed the 30 minutes’ bottom time, so we had a simple and slightly safer decompression plan for such a dive. It would be printed on the info board on the boat, with every diver asked to memorise the deco-stops in case of computer malfunction. A dive-timer was obligatory for each participant.”

Emergency stage cylinders were installed at the site in case of any unexpected problem or equipment malfunction, and a deco station was placed at 6m with six regulators attached to a 50-litre 100% oxygen tank to shorten the deco stops.

“Diving was into the blue but visibility was really good, and we could already see the bottom approaching when we were at 25-30m,” says Hodalic. “We had no guideline because the huge white hoses used for the underwater Mammoth vacuum pumps were more than visible in the dark blue of the abyss.

“Water temperature was a pleasant 23-25°C, so apart from being bored on the deco stops the 60- to 90-minute dives were pure joy, especially if there were some new discoveries to see at the bottom that day.”

By 2010, the Croatian archaeologists had been joined by more researchers from Venice, and the fate of the ship and the story of its precious cargo continued to be unravelled.

“Crossing the shallows close to Mljet, the ship was likely to have damaged its hull,” explains Igor Miholjek, head of the CCI’s Department for Underwater Archaeology and the man in charge of the research from the start. “Water would have gushed into the ship, but at the speed at which it was travelling, it continued to sail for a short time. This is why the remains are located 200m from the shallows.

“At that time, ships would generally sail along the channel between Mljet and the Peljesac peninsula, so why this one was crossing the perilous shallows south of Mljet we don’t know.

“It might have been chased by pirates, because Mljet was known as a pirate island at that time.”

A BREAKTHROUGH CAME when the team located the ship’s bell and coins. “As soon as the bell was recovered, the number in Latin ‘MDLXVII’ [1567] could be clearly seen. It indicated the year the bell was cast, and revealed the most probable year of launching the doomed ship – the key information for studying it,” says Jurica Bezak. “It also established the year before which the shipwreck couldn’t have occurred.”

Inscriptions on the silver Ottoman coins known as akches indicated that they had been issued during the reign of the Ottoman Sultan Murad III, from 1574 to 1595. So more than 400 years had passed since the ship had wrecked, in which time most of the organic material had been destroyed.

However, remains of the ribs and some other timber parts survived in the sand, leading the researchers to conclude that the vessel had been about 24m long.
Though relatively short, its broad beam would have allowed it to carry plenty of cargo.

Also found in the sand were cannon. Because of the danger from pirate attacks, artillery was often carried by merchant ships navigating the Adriatic, and Venetian merchant vessels were also subject to attack by the Uskoks, Hapsburg mercenaries who waged guerilla war against the Ottoman Empire.

The lion, a symbol of the Republic of Venice, could be seen on the cannon, a clear sign that this was a Venetian ship owned by a wealthy individual.

It had certainly been travelling from the east, most likely Istanbul, and probably heading for Venice. The east coast of the Adriatic offered the most favourable sailing conditions, and better supply options for the three-week journey between these important cities.

Trade was thriving. “Large quantities of glass, expensive fabrics, gold jewellery, glasses, paper, soap and clocks… were exported from Venice to the east,” says archaeologist Lilijana Kovacic of Dubrovnik Museums. “From the Ottoman Empire to Venice came large quantities of cereals, as well as objects of applied arts, raw silk, cotton, silk fabrics, mohair wool, leather, camel-hair fabrics, horse equipment, arabesque-decorated weapons, pottery and a variety of curiosities.”
If the sunken ship off Mljet was carrying such goods, most failed to survive the ravages of time, but much of the pottery seemed to have been carefully stacked in wooden barrels and wrapped in straw or linen, explaining its excellent state of preservation.

“At auction houses such as Sotheby’s and Christie’s, prices for such individual items have reached £30,000 and more,” says Igor Miholjek. “I’m pretty sure that the ‘pizza plate’, as we call one of the plates found off Mljet, would earn us at least that much, as it’s very well-preserved, with a nice glaze.”

Not that any of the finds are for sale. All the Iznik pottery found at Sveti Pavao is being treated as part of Croatia’s cultural heritage.

Turkish art historian Dr Nurhan Atasoy, probably the world’s leading expert in Iznik pottery, has written that the fact that the finds had been loaded aboard a ship for export to European customers “explains the existence of the coats of arms of selected families on individual examples of Iznik pottery, found in the collections of European nobility.

“A wide selection of patterns in this collection and the intricacy of the paintings indicate the broadness of artistic creativity”.

Experts examining the pottery were surprised to learn that it included as many as four of the five styles of pottery decoration developed by that period in Iznik. Each Ottoman Sultan cultivated his own Iznik master, who developed his own decorative style, and before the wreck was found it had been assumed that these styles were discontinued whenever a new Sultan succeeded to the throne and picked a master.

However, the finds demonstrated that styles survived both master and sultan – probably because of consumer demand.

Following painstaking restoration work, the CCI and the Mimara Museum in Zagreb first exhibited the Sveti Pavao Shipwreck finds in 2015, accompanied by a catalogue that allowed even a layman an insight into their significance.

“Negotiations are now taking place about exhibitions in London, Marseille and Piran [in Slovenia],” says Miholjek. “People understand that this is a unique discovery on a global scale.”