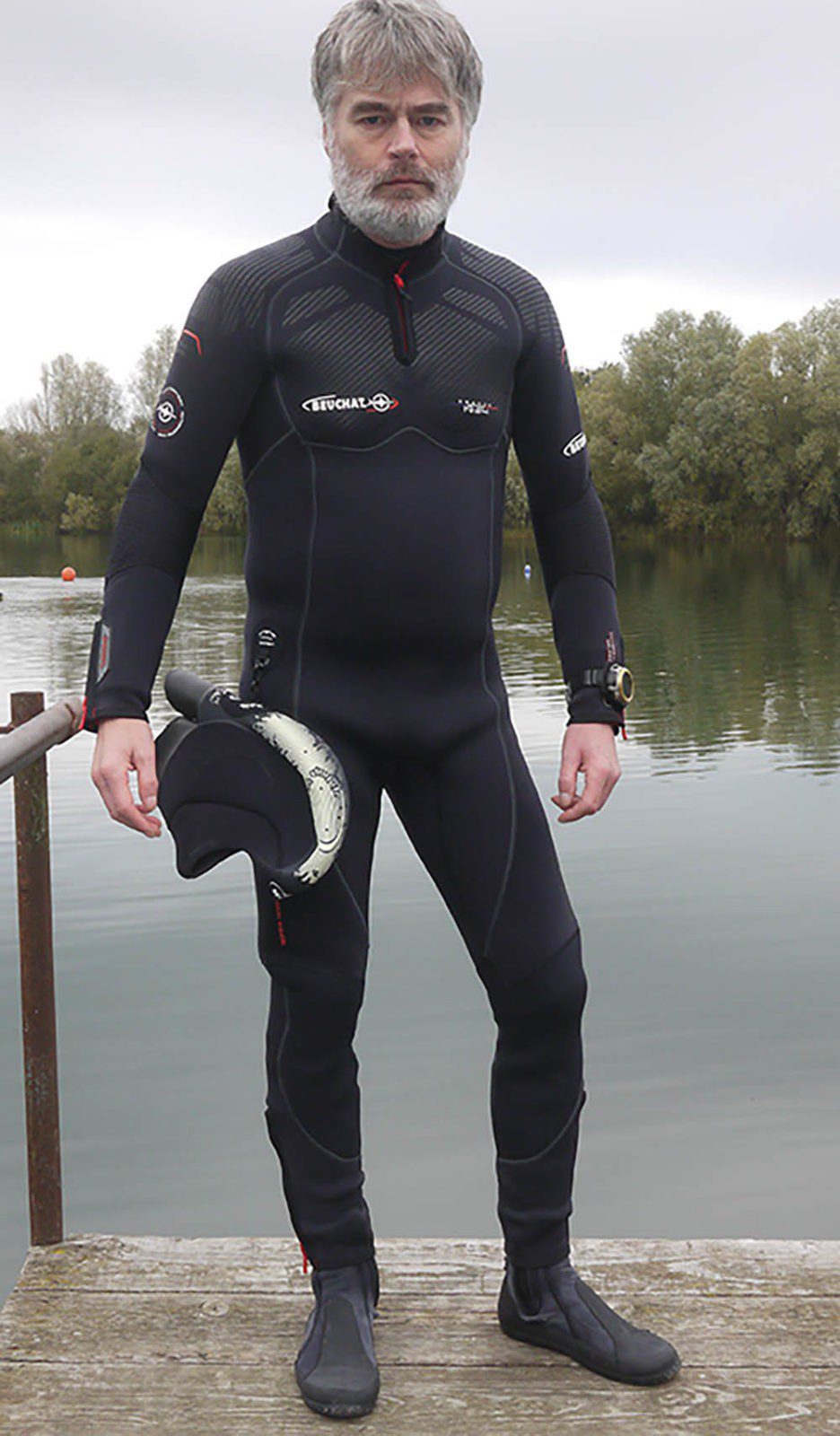 THE CHEST LABEL BOLDLY ANNOUNCES Beuchat, France, 1934. Beuchat is a company with a rich history that predates Cousteau’s Aqualung, having its origins in the interwar years of goggling, made famous by the Antibes-based American Guy Gilpatrick and Parisian Yves Le Prieur’s diving club, founded on his invention of a small air-cylinder coupled with a freeflow regulator.

But Beuchat would later become suit-makers to the celebrated captain, providing the signature black suits with yellow piping for the shows that, in the late 1960s and ’70s, made Cousteau a household name.

After a succession of dealership changes in the UK over the decades, with mixed results, Beuchat is now distributed by Midland Diving Equipment. MDE’s own history dates back to the 1950s and it has a strong track-record for marketing some iconic scuba brands.

The Focea 5 is a one-piece, back-entry suit with seals at wrists and ankles, which makes it a semi-dry. It’s one of a range available in men’s and women’s styles, thicknesses of 5mm or 7mm (only the 5mm tested here is sold in the UK) and with or without a built-in hood.

Beuchat does offer a hood-attached over-shorty as an optional extra for the Focea 5 Comfort Overall Collar but it is the hoodless model that’s reviewed here.

Wetsuits don’t so much generate warmth as slow heat loss. Neoprene is a poor conductor of heat and so delays body warmth being lost to the water, which absorbs heat about 20 times faster than air. So the thicker the neoprene the longer you can dive comfortably. The deeper you dive, the more neoprene compresses and the less efficient it is, so you cool faster, not helped by water usually being cooler at depth.

Flushing, or water movement through your wetsuit, is the fastest way to lose body heat. In the past UK manufacturers often made suits to measure, sculpting them around the diver and virtually eliminating flushing, such that you could remove it and it would only be damp inside. Those tailors are mostly long gone.

“Designed in France”, says one Focea logo proudly – made in Cambodia, admits another. It’s cheaper to make suits outside Europe, and most big diving brands do so. But without the option of a custom-fit, how do you minimise flushing in a stock suit?

As a semi-dry, the Focea depends on seals, baffles and seam construction to minimise water-flow through the main entry and exit points. You want as little water in your suit as possible and, once in, to keep it there.

Wrists and ankles have long cuffs with rubber-faced neoprene designed to be turned in, so that the rubber is against your skin. It “sticks” to your skin and makes a much better seal than the nylon lining, intended to help you slip your suit on easily and add strength.

To protect the seals, the forearms and calves have fold-over sleeves. These are zippered, to make it easier for you to invert the seals.

The neck-seal is designed to dock with a matching one on the hood-yoke, and the hood sports a face seal.

It also has a baffle that allows any air seeping in from your mask during clearing or ascents to exit through small holes in the top, and works to prevent cold water entering.

The back zip has an underlying flap, ridged and slotted to seal across the back and minimise flushing through the zip.

Finally, the seams are dry-stitched – after the edges of the suit are glued together it’s stitched twice, once from each side, but the needle never penetrates the suit.

Dry-stitching adds to the time and cost of making a wetsuit, but it does prevent heat-loss via the seams. This is important in the Focea 5 because, with more than 40 individual panels allowing 20 different grades of neoprene to be used in various places, it has a lot of seams.

Some areas of a suit such as joints need a lot of flexibility while others, like knees, need to be abrasion-resistant. Warmth is prioritised around the torso, ease of movement around the shoulders. But the many panels also allow the suit to be better shaped for a closer fit, virtually eliminating water-inviting gaps.

Suspend the Focea 5 from a hanger and you’ll see that the elbows and knees are bent and the back follows the curve of your spine.

The anatomic cut also increases comfort. For example, the pre-bent joints help to prevent neoprene bunching up behind your knees as you swim, which can cause abrasions.

The underarms are raglan types to avoid seams needing to meet in the armpit, an area that can be vulnerable to tearing.

Along with reinforced knees and elbows, areas such as the shoulders, apt to be scuffed by BC straps, or the butt, which can get worn from sitting, have a non-slip synthetic coating.

The hood has a built-in snap-hook that tucks away when not in use. It clips to a D-ring on the right hip, so you can carry it around the dive-site until needed.

The Focea 5 also includes a universal computer-holder – a neoprene patch into which you thread the wrist-strap.

A touch-fastener panel sticks to the left forearm to stop the computer moving around as the suit compresses and the strap slackens.

I tested the Focea 5, with some trepidation, at Wraysbury Dive Centre’s lake near Heathrow, an ideal location for testing equipment that doesn’t require deep water.

On arrival I was confronted by a bunch of divers wandering around in drysuits, to remind me of the grim reality of testing a suit – it’s about seeing whether you get cold!

Adding to my concern was the fact that MDE had not supplied the over-shorty, so I’d be confronting the 15° water in a suit considerably thinner than the 7mm ones in which I have previously frozen in 24° temperatures.

The Focea 5 is very easy to get into unassisted, and the fold-back cuffs made inverting the seals straightforward. The collar touch-fastener allows you to adjust the fit and retains the zip to prevent it sliding open on your dive. It is a very comfortable suit to wear at the surface, and that’s important too.

On the dive I wore gloves and they fitted well, despite the combined thickness of the glove cuff and the Focea’s doubled-back wrist-seal and over-sleeve.

I had initially maligned the Universal Computer Holder as a gimmick, but it conveniently held my computer-watch in place while I fastened the strap. Nice touch, Beuchat.

Hitting the water, I quickly became aware of a problem – not with the Focea, but with me. This is important, because I had requested a medium suit, and this proved a little large for me. So during the dive I became aware of water shifting around the suit as I swam.

This flushing rather unfairly stacked my test criteria against the Focea. It also underlined that the best place to buy a wetsuit is in a shop, where you can try it on.

To test the neck-seal, where it docks to the hood-seal, I did a succession of crazy breakdance head moves to try to flush cold water past it. Not a chance.

I also tested the vents in the hood by pulling the face-seal away (the seal, on me at least, fitted very well, coming up high on the chin, yet not really interfering with the skirt of the mask I was also evaluating) and blowing air into it. The air escaped instantly.

The hood contains mysterious holes beside the ears. Beuchat calls them equalisers, though the spec-sheet does not explain their purpose. They allow water through the hood and into your outer ear canal.

Why? A hood that seals well around neck and face won’t necessarily flood unless you deliberately break the face-seal. It’s easy to forget to do this, especially if making fast descents, or with your hands taken up by cameras, and then the hood can seal over your outer ear like an earplug.

As you descend, increasing pressure in your body tissues will cause the outer ear canal to swell and the eardrum to bulge. It’s called reverse ear, and I put a micro-tear in my own eardrum once in this way.

Top marks to Beuchat for a simple solution.

It certainly works, though perhaps the manufacturer should let people know why it’s done it! The holes might also improve hearing through the hood, but I didn’t check that.

My computer stayed firmly in place, too – I’d like a holdfast on the other wrist for my compass.

Wraysbury had provided me with a safety diver and guide, and Jon Calloway took me along at an average swimming pace. The suppleness of the Focea made it a very easy suit in which to swim.

Pace makes a huge difference to body temperature, and is one of many factors that make testing a wetsuit objectively difficult.

Not only does the individual’s own disposition to cold vary enormously (I feel it) but so does depth, current, number of previous dives that day or trip and so on.

Staying static, as I often do as an underwater photographer, can chill you fast.

After 45 minutes I was just starting to feel a little cold, but nowhere near needing to surface, and a long way off shivering.

When we exited, the excess water that had seeped in because of the fit pooled in the legs, held in by the ankle-seals. I had used a simple trick to try to determine the Focea’s effectiveness at minimising flushing – I had poured a little diluted shampoo into the suit before diving. When I stripped off, it was still there.

It provided a marker that the suit fitted me well around the torso, for instance, and the Focea really doesn’t flush. I have dandruff-free chest-hair!

Extrapolating a little because the loose fit made an entirely fair test tricky, this is a superb semi–dry. It greatly exceeded my expectations. And I was glad of that, as I walked back past all those guys in their drysuits.