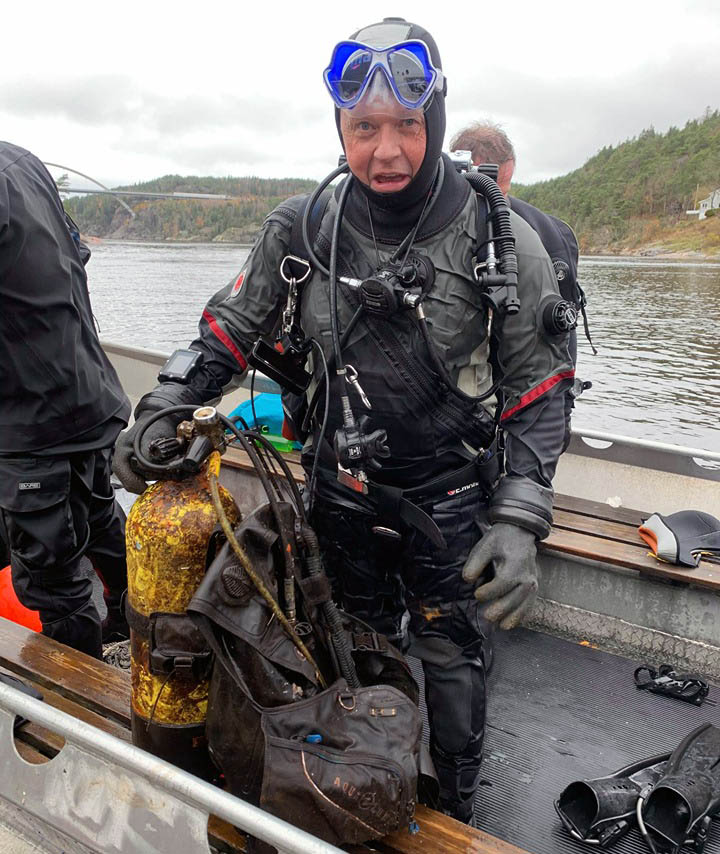 A Norwegian diver forced to ditch his scuba-rig on a dive found it again three years later – and his Apeks XTX50 with Stage Three octopus regulator set was still working to official coldwater standards.

Per Wichstad was on a cross-border drift-dive in the Iddefjord between Norway and Sweden in September 2016, passing beneath the Svinesund bridge where the fjord is at its narrowest point.

“There is a very strong tidal current and the visibility is extremely poor, maybe 1-2m,” he said. “I got into trouble under water and a chain of events led to me dumping most of my rig to stay afloat.”

He had hoped that one of the 15 other participants in the dive would be able to retrieve his kit, but in the difficult conditions no one had been able to find it.

Wichstad then took part in last year's border dive. “What do you know? I swam directly into my old gear!” he said. “What a strange feeling to see the old equipment in this murky water! Crabs had used my gear as a home.”

The kit, which he was able to recover, had spent three years lying in silt at 25m, and most of it was past saving.

However, Wichstad found that his cylinder still contained air and the regulator remained pressurised and appeared to be fully functional. Despite the cold, fast currents, debris, salt water and marine life, there had been no freeflows or leaks.

When Wichstad told Apeks the story, it was keen to lab-test its product to find out how it had survived what it called “the ultimate saltwater test”.

Emptying the regulator of crab-shells, stones and sand, it found that despite encrustation of most of the parts the first-stage turret still swivelled smoothly and the second-stage adjusters remained fully operational.

It was in good enough condition to be put straight onto the manufacturer’s ANSTI machine, which evaluates breathing performance. The regulator’s interstage pressure was reported still to be at factory settings.

Apeks set the machine to simulate a 53m dive at 3°C water temperature, with a breathing rate of 25 breaths a minute. And it was excited to find that the XTX50 set performed at a standard that would pass the EN250A cold water regulation.

“This is not an advert for not properly maintaining and servicing your Apeks regulators, but it is nice to know that when we say you can trust an Apeks regulator, this story shows that you really can,” says the manufacturer. Even before the ANSTI test, Wichstad had told Apeks he would be a life-long fan of the brand.