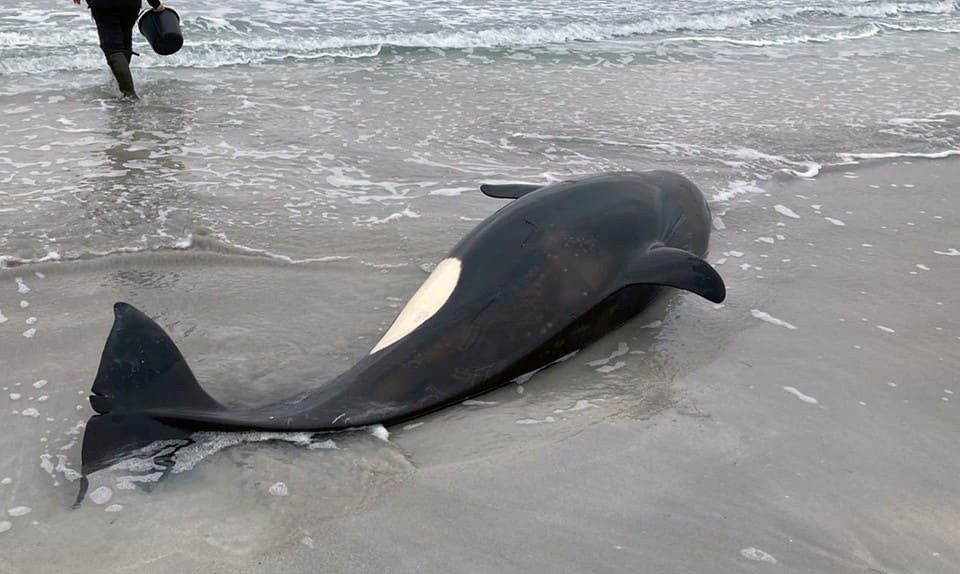 A stranded orca has been rescued in Orkney by volunteers from the conservation charity British Divers Marine Life Rescue. Such incidents involving orcas are “incredibly rare”, says BDMLR, which believes this was the first time the organisation had been able to refloat one successfully in the UK.

The local team were alerted on Monday morning (4 January) and had expected to find a dolphin when they turned up at the beach-site near Sanday in the Bay of Newark. A couple had seen the animal lying in surf from their house, and the Marine Mammal Medics who attended were surprised to find that what they had reported was a 3.4m killer whale.

They reckoned the orca to be 3-4 years old, which meant that it could have been independent of its pod. Thought to be a male, the juvenile was in good condition, indicating that it had been feeding recently.

It was lying on its side in the surf parallel to the sea, with the tide coming in. Helped by local residents the orca was manoeuvred into an upright position to keep its blowhole out of the sea and allow it to breathe.

As the tide came in the rescuers were able to turn the orca round to face out to sea and to refloat it by extending a dolphin stretcher beneath it. The recently purchased stretcher was being used for the first time.

After about an hour the orca was able to swim away from the beach. The team kept watch for an hour but were confident that the animal had been able to regain deeper water.

Orca are seen fairly regularly around Orkney but the stranded specimen was unknown and might not have been part of the resident pods, said BDMLR.

Divernet recently reported on strenuous attempts made by the charity’s volunteers to save 10 sperm whales stranded on an east Yorkshire beach on Christmas Eve.

During 2020 and despite the coronavirus pandemic BDMLR was able to respond to 1788 call-outs, most involving seals along with 94 for dolphins and porpoises and 36 for whales. Every year the charity trains more than 1000 volunteer Marine Mammal Medics.