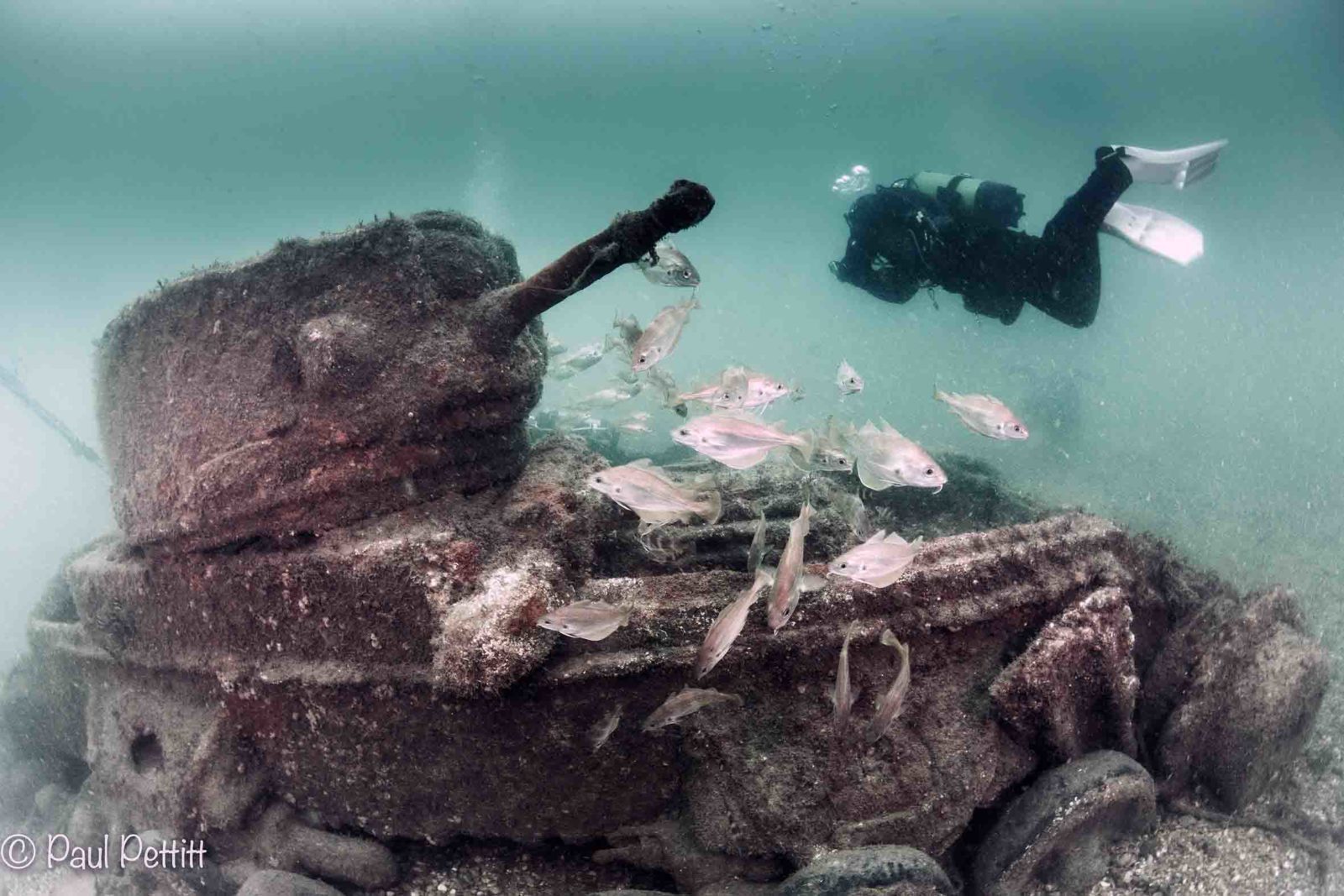 Submerged Valentine and Centaur tanks, D7 armoured bulldozers and Mulberry floating harbour components, many of which have long been attractions for Channel scuba divers, have been given protected status to mark the 75th anniversary of the D-Day landings.

The World War Two remains in Dorset, Devon and West Sussex have been designated for protection as Scheduled Monuments by the Department for Digital, Culture, Media & Sport on the advice of Historic England (HE).

As such, recreational diving is still permitted on a look-don’t-touch basis but any other activities require licensing.

The landing in Normandy of 156,000 Allied troops with their vehicles, equipment and supplies on 6 June, 1944, is recognised as the greatest amphibious operation in history.

Contributing to its success were the many rehearsals and training exercises carried out along the South Coast of England and the British engineering achievement of the Mulberry harbours, says HE which, 75 years on, has now stated that: “It is vital that we protect them as a memorial for future generations.”

The Duplex Drive (DD) Valentine tanks were taking part in the Exercise Smash rehearsal at Studland Beach in Dorset six weeks before D-Day. Modifications that should have enabled them to float failed to work in the rough sea conditions, and seven sank on leaving their landing craft, with the loss of six men. As a consequence, during the D-Day landings Valentines were released only in shallow water closer to shore.

Two Centaur tanks and two D7 armoured bulldozers located off Selsey Bill in West Sussex are also now designated as Scheduled Monuments. As part of the Operation Neptune assault on Juno Beach of 5-6 June they had been loaded onto landing craft LCT(A)2428, but it broke down in the Solent.

After being taken in tow it capsized, spilling its load, and was later scuttled. The sunken vehicles are the only surviving group of their type in north-west Europe.

The four major component parts of Mulberry artificial floating harbours were towed by tugs across the Channel to be assembled and then sunk to form sheltered structures able to protect ships as they unloaded. The Outer or Far Mulberry off Pagham Harbour that has now been protected is a rare type of steel-reinforced concrete unit that functioned as a sunken breakwater.

It had been awaiting passage to Normandy but was badly damaged in a storm and remains in place. Also now protected and lying in shallow water off Pagham is the Inner Mulberry, a rare steel reinforced concrete pier designed to connect to offshore pontoons. Five other Mulberry components lie in the sea at Pagham.

Completing the tranche of designations, six replica landing craft left in the Braunton Burrows sand-dunes in Devon and once used for training US troops have been grade II listed.

Meanwhile HE says that through Wessex Archaeology it has been carrying out underwater surveys of two large US LSTs (Landing Ship, Tanks). These were sunk by German E-boats during the Exercise Tiger D-Day practice landings at Slapton Sands in Devon.

The ships were carrying hundreds of US servicemen as well as tanks, vehicles and trucks, and some 800 men died in the attack. Working with the US Navy and Royal Navy, HE says it hopes that the survey will decide whether the wrecks should be granted protection later this year.