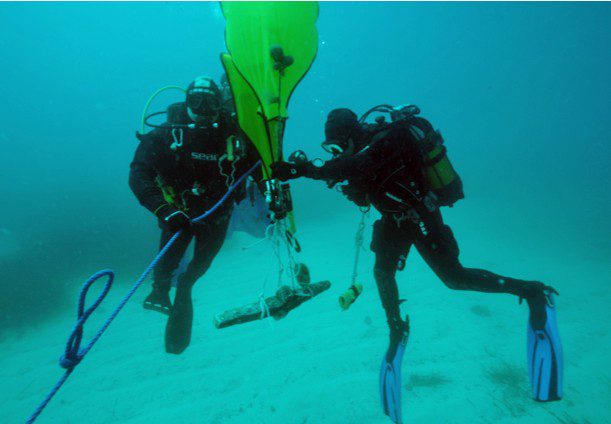 A 2300-year-old stone anchor inscribed with a dolphin symbol has been retrieved by scuba divers off the north-west coast of Sicily.

The divers were dispatched by the Superintendency of the Sea, which oversees the Italian island’s protection of underwater heritage. They used lifting bags to recover the small anchor from a depth of 19m off the town of San Vito Lo Capo on 23 May, and took it to their base in the capital Palermo for conservation.

Local diver Marcello Basile, who originally found the anchor, had warned the Superintendency that somebody had attempted to move it: “We needed to safeguard this testament to our heritage,” said officials.

The anchor dates back to the Hellenistic-Roman era (4th-3rd century BC) that followed the death of Alexander the Great and during which Greek culture flourished throughout the Mediterranean.

It features a central box section, with the dolphin depicted in relief on one of the flukes.

The dolphin, a symbol associated with the goddess Aphrodite Euploia, was supposed to help sailors to navigate safely and prevent shipwrecks. The symbol continued to be used for good luck on Mediterranean fishing-boats up to the 20th century.

Many artefacts, such as the anchor reported to the authorities by divers around Sicily, have been left in situ.

Apart from a network of local divers keeping an eye on maritime relics, the Superintendency of the Sea uses devices such as movement-detecting anti-theft buoys to monitor these sites.