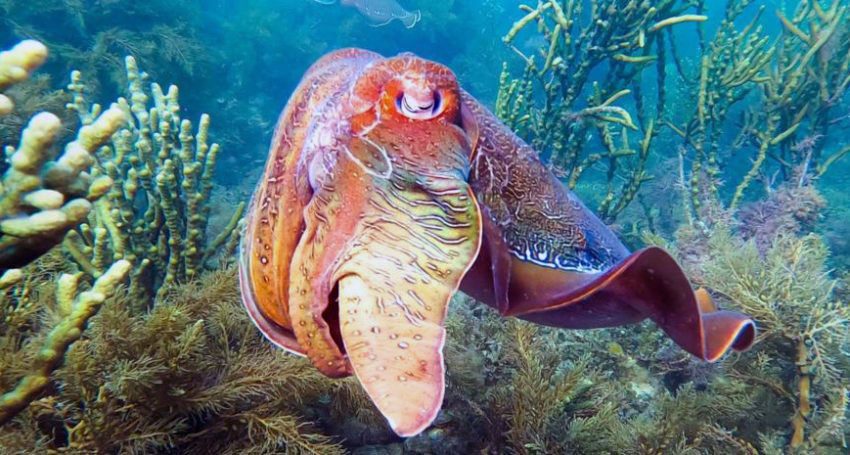 More giant Australian cuttlefish have returned to their breeding ground this year than have been seen since the last century.

Early estimates are hovering as high as a quarter of a million cuttlefish, and many divers are being attracted to witness the aggregation, along a five-mile stretch of rocky reef at Point Lowly in the Spencer Gulf, about 12 miles east of Whyalla and almost 250 miles north-west of South Australia’s capital Adelaide.

Giant Australians (Sepia apama) are the world’s biggest cuttlefish, at up half a metre long and weighing 10kg. They are nicknamed “rock stars of the ocean” because, with a mere 12-18-month lifespan, they live fast and die young.

This makes the May-August breeding season critical, because the number of surviving eggs affects the number of adults that return the following year to breed.

The cuttlefish are thought to be drawn to Point Lowly’s dark rocks and crevices because they offer their eggs protection from sunlight.

During mating season male cuttlefish combine camouflage to match rocks or seaweed with colour-changing and sparring displays to win the attention of the females that go on to lay 100-300 eggs.

When hatched, the thumbnail-sized baby cuttlefish move along the seabed into the Upper Spencer Gulf.

“There’s absolutely nothing like it in the world, it’s so reliable to see the cuttlefish,” says Whyalla dive and snorkelling tour leader Tony Bramley. “It’s safe, accessible – South Australians are so lucky to have one of the most precious marine attractions on their doorstep.”

However, this year’s breeding season has been marred by controversy over the state  government allowing fishing of the cuttlefish outside a restriction zone around Port Lowly for the first time since the grounds were protected in 2013.

It was fishing that first caused a devastating drop in cuttlefish numbers from the late 1990s.

Carl Charter, co-founder of the Experiencing Marine Sanctuaries charity, reckons the numbers of cuttlefish visiting the area this year could be double those present in 2019.

“It’s great news, I was up there myself a couple of weeks ago and there were probably double the numbers of last year – you could walk directly into the water and see the cuttlefish in the shallows,” he said.