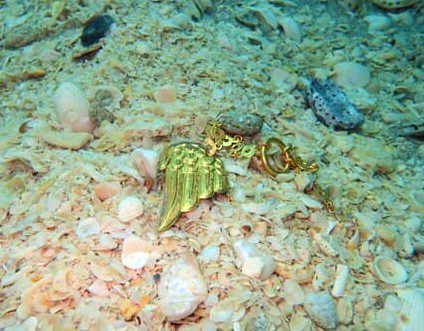 A golden wing found this summer by scuba divers off Florida’s Atlantic coast has completed a discovery made almost 10 years ago – when a diver came across the 300-year-old statuette of a one-winged pelican.

That 14cm-tall golden figurine and the separated wing came from a Spanish ship wrecked in 1715. The statuette was found in August 2010 by diver Bonnie Schubert, using an underwater metal detector over sand about 300m off Frederick Douglass Beach, Fort Pierce.

The wrecked vessel was one of a fleet of 11 treasure ships bound from Cuba to Spain that ran foul of a hurricane on the last day of July, 1715. Their loss earnt the area between the towns of St Lucie and Sebastian the name “Treasure Coast”. US divers search for artefacts there between May and September each year

Despite missing a wing, the bird – at first thought to be an eagle – was sold for $150,000, according to salvor with rights to the wrecks, 1715 Fleet Queens Jewels. The state takes 20% of the value of any artefact found.

Now the wing, with attached chain, has been found in sand close to where the rest of the pelican turned up. The fortunate divers were Henry Jones, captain of the boat Perfect Day, and crew-member Tracy Newman. They had scoured the area for the missing pinion many times over the past decade – as had Schubert.

For the 20th time in 2020 the crew used blowers to open up a hole in the sand, so that the divers could search it with their metal detector.

The statuette, known as the Pelican of Piety, is thought to have been a reliquary, made with a cavity to contain holy relics. The pelican, a mother drawing blood from her breast to feed starving chicks, represented Christ the Redeemer shedding his blood on the cross.

The Pelican of Piety is valued at $885,000. Its buyer would reportedly also like to own the wing – if the price is right.