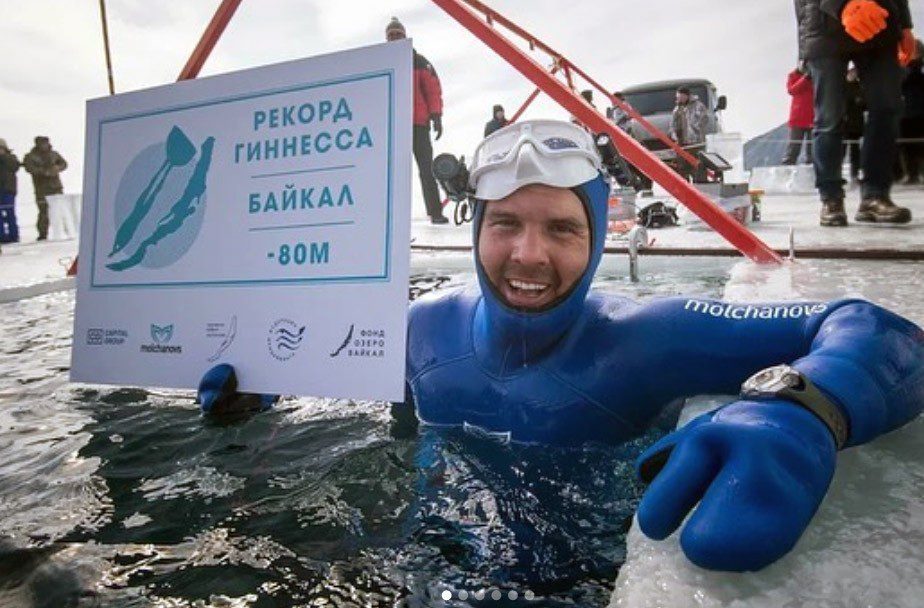 Alexey Molchanov after his 80m ice-dive.

On 16 March, Molchanov, 34, descended through the 2-degree C water from a hole cut in the metre-thick ice in his bid to complete the deepest freedive under ice using a monofin. The dive took 2min 53sec and was verified by an official from freediving governing body AIDA.

If also verified by Guinness World Records the dive will displace that of Australian freediver Ant Williams, who reached 70m in a Norwegian lake in 2019.

Molchanov also claimed the record for dynamic apnea under ice using a monofin in February 2020, when he covered 180m.

And it was a breath-hold swimming record that Guerin-Boeri had in mind as he took 3min to cover a distance of 120m without fins yesterday (25 March). The 36-year-old freediver wore a wetsuit as he swam between a set of ice-holes cut 20m apart, guided by a cable, though next year he plans to undertake a similar feat but without thermal protection.

Guerin-Boeri’s competitive bests, as recorded by governing body AIDA, are 6min 41sec for static apnea, 211m for dynamic apnea no fins and 51m in constant weight no fins.

2021 has brought a flurry of under-ice breath-hold activity. In February Divernet reported on Czech freediver David Vencl’s claim of a new Guinness World Record for distance-swimming under ice without fins or thermal protection. The 38-year-old took 95sec to cover 81m in a Czech quarry.

The record of 76m has been held by Danish freediver Stig Severinsen since October 2013 and is still shown by Guinness World Records at present – as is his under-ice distance record of 152m with wetsuit and fins, swum in 2min, 11sec eight years ago.