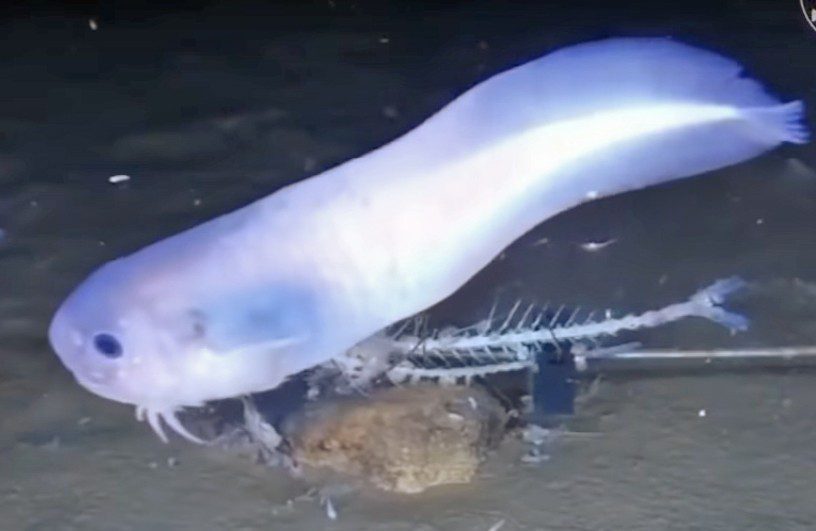 Scientists exploring deep Pacific sites off Peru and Chile have captured footage and a specimen of what are believed to be three previously unknown species of the elusive snailfish.

The team of 40 scientists from 17 countries were exploring the 11km-deep Atacama Trench, which runs for 3700 miles along South America’s west coast. At a depth of 7.5km they came across what they have temporarily named the “the pink, the blue and the purple Atacama snailfish”.

Belonging to the Liparidae family, snailfish are perfectly adapted to living at extreme pressure, say the researchers, yet subvert the stereotypical image of a deep-sea fish. Instead of huge teeth and a menacing frame they are small, translucent and have no scales.

“Beyond the reach of other fish they are free of competitors and predators,” said Dr Thomas Linley of Newcastle University.

“As the footage clearly shows, there are lots of invertebrate prey down there, and the snailfish are the top predator. They seem to be quite active and look very well-fed.”

Dr Linley explained that it was the gelatinous structure of the snailfish that suited it so well to life at extreme pressure, the hardest structures in their bodies being their inner-ear bones, used for balance, and their teeth.

“Without the extreme pressure and cold to support their bodies they are extremely fragile, and melt rapidly when brought to the surface,” he said.

Newcastle University has pioneered technology used to explore ultra-deep environments, and in the past five years says it has completed nearly 250 deployments with its “landers”, which are equipped with HD cameras and baited traps and were used on the expedition.

A lander succeeded in catching one of the snailfish, which is currently being analysed.

Also captured was rare footage of Munnopsid isopods, crustaceans with small bodies and very long legs that use “paddles” to swim backwards and inverted, before righting themselves on the seabed and extending their legs spider-like to switch to walking mode.