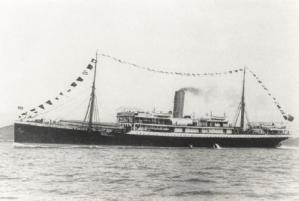 The ship’s bell from the World War One wreck of the Mendi, thought to have been salvaged by a scuba diver in the 1980s but surrendered last year, is being returned to South Africa today (28 August).

Prime Minister Theresa May is set to hand the artefact to President Cyril Ramaphosa in a formal ceremony during a visit to Cape Town.

The Mendi sank off the Isle of Wight on 21 February, 1917, after being rammed in thick fog by the Darro, a Royal Mail packet-boat.

With the Darro failing to rescue survivors in the water, the collision resulted in the deaths of 646 men, mostly black workers from the South African Native Labour Corps. They were being shipped to Europe to support the Allied war effort.

Last June the bell was left in a bag on Swanage Pier in Dorset for a BBC reporter to collect, following an anonymous call.

As reported at the time on Divernet,  it appeared that a senior diver’s conscience had been pricked on the centenary of the Mendi sinking.

A note left in a bag with the bell read: “If I handed it in myself it might not go to the rightful place. This needs to be sorted out before I pass away as it could get lost.”

The wreck was rediscovered in 1974 but it was another 35 years before it was given official protection as a war grave.

Many artefacts were removed in that time by divers in what is described as “a common and largely uncontroversial practice” in the recent book about the Mendi “We Die Like Brothers”.

The story of the sinking is still commemorated as a symbol of racial injustice in South Africa, so the handover of the bell has significance. Until now it has been on display in a museum in Southampton.