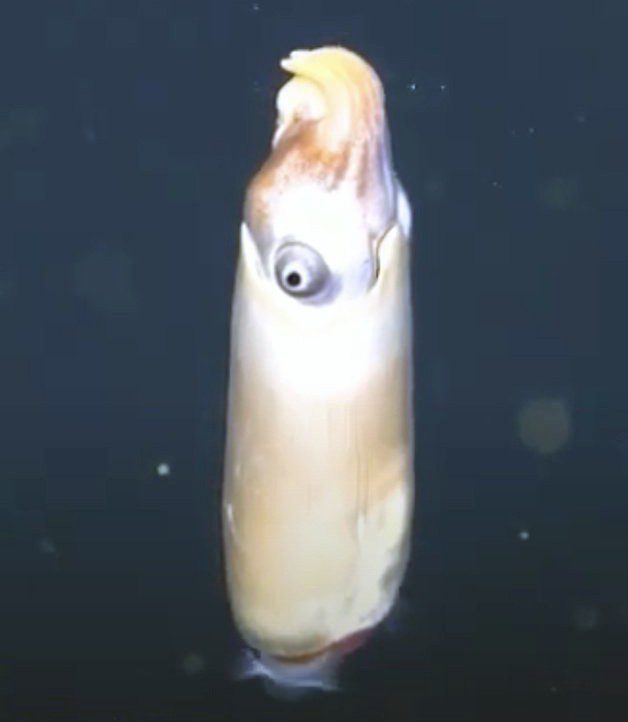 Spirula spirula, the ram’s horn squid, was known about from discarded shells washed up on beaches but had never been recorded in its natural deep-sea habitat before – until now.

An ROV camera operating at a depth of 861m picked up a 7cm specimen of the cephalopod species – surprising scientists from Schmidt Ocean Institute who had been expecting to study jellyfish.

They were deploying the SuBastian ROV from the research vessel Falkor on Australia’s Great Barrier Reef, as part of a year-long expedition that has already yielded a number of surprises – including the previously unknown coral reef reported on Divernet last week.

On the hour-long video, which can be watched here, a scientist exclaims: “What on Earth…?” as the rare squid appears on screen.

“Any cephalopod experts out there know who this squid friend is?” the team later asked on Twitter. After facetious suggestions involving Minions, it was soon confirmed that a spirula had been captured on video for the first time.

The ram's horn is regarded as one of the most unusual squid species. Cuttlefish carry in their tail an internal shell containing gas chambers that they use to control their buoyancy, but the ram's horn squid is the only other known mollusc to have developed such an arrangement.

The squid’s skeleton is tightly coiled, unlike that of a cuttlefish, and its design resembles that of nautiluses, which have external shells.

Experts studying the new footage were particularly surprised to see the ram’s horn squid floating head up, fins down. Because of its buoyant shell and relatively heavy head, they would have expected it to be the other way round.

This also means that its tail-mounted light-generating “photophore”, used by deep-sea creatures to spot prey, faces upwards. This would normally be considered an unhelpful arrangement because it leaves the creature exposed to predators below.