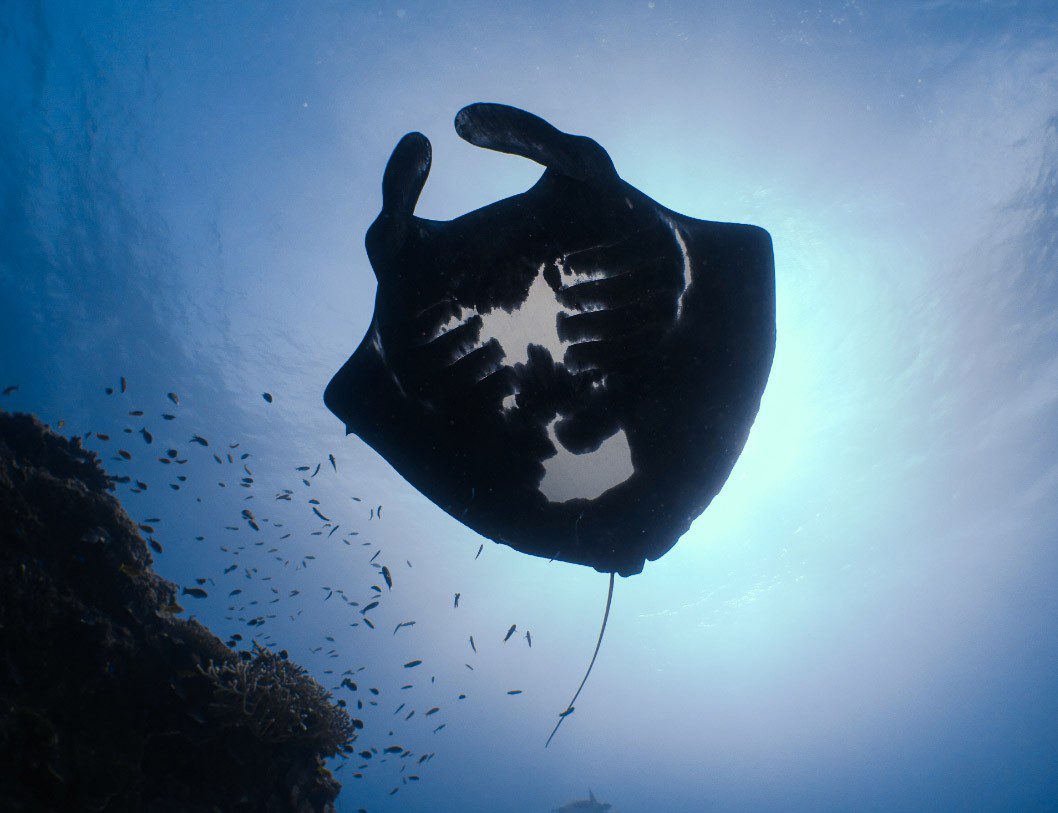 Why are some mantas black? And why are black mantas so unevenly distributed around the world? What is said to be the first study into black pigmentation in a marine species has concluded that it probably results from random evolutionary processes such as genetic drift.

Melanism, as the effect is called, is common in land animals but rare among ocean-dwellers. Animals with darker pigmentation of their skin or fur are known as “color morphs”, and at sea it is mantas that most commonly exhibit this trait – the only species of ray or shark known to do so.

The majority of mantas have dark grey backs and mainly white undersides, but black mantas are almost entirely black except for a central white blaze on the underside that varies in shape and size, allowing observers to identify individuals.

Scientists from the Marine Megafauna Foundation (MMF) and the universities of Western Australia, Papua, Udayana, Murdoch and Macquarie collaborated to investigate melanism in giant mantas (Mobula birostris) and reef mantas (Mobula alfredi) in the Indian and Pacific Oceans.

They used MantaMatcher, a global database of identification photographs and records of encounters compiled by scientists with the help of recreational scuba divers.

Black mantas were found to make up as much as 40% of populations in some locations, yet were absent in others.

“Melanism was most prominent in the Raja Ampat (West Papua, Indonesia) population of reef manta rays (40%) and in the Ecuador population of giant manta rays (16%), which is interesting considering the distance between these two regions,” said lead author Stephanie Venables.

“The variation in melanism frequency across locations raises the questions of why melanism has persisted in manta rays, and why it is more common in some populations than others.”

Melanism in land animals has been linked to camouflage and thermo-regulation advantages, but such explanations seem unlikely to apply to mantas, especially as being darker could make them stand out more easily to their few predators, such as large sharks or orcas.

“Despite being less camouflaged, we found that predators don’t appear to target black mantas more than normal-coloured mantas, as survival rates were equal,” said Dr Andrea Marshall of the MMF.

The study found evidence that melanism could spread between neighbouring populations of giant manta through gene flow. Although it is passed down through the generations, the scientists have yet to identify the genes responsible in manta rays.

The research is published in Proceedings of the Royal Society B.