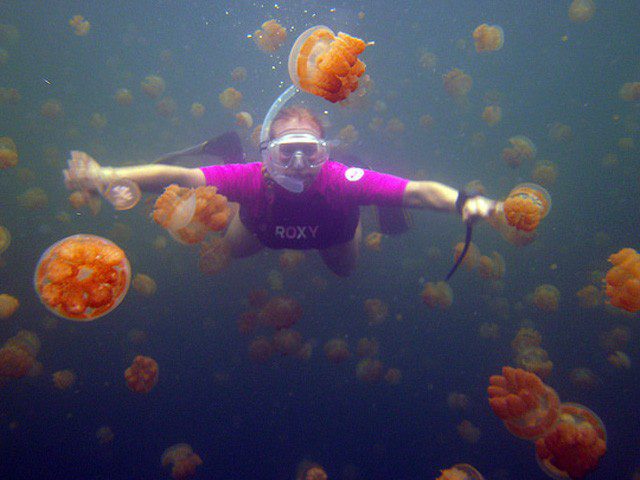 Jellyfish Lake, a long-established attraction for divers visiting Palau in Micronesia, has been reopened following a two-year closure to allow its depleted population to recover.

A severe drought in 2016 had been the major factor in the drastic decline of the jellyfish that prompted the closure, although high amounts of sunscreen entering the water was also believed to have contributed to the decline.

Now the Palau-based Coral Reef Research Foundation (CRRF) has expressed optimism after monitoring the marine lake and finding that many thousands of new golden jellyfish have appeared. Its most recent survey in December indicated a population of around 630,000, a figure that was expected to go on rising as long as weather conditions played their part.

The Mastigias papua etpisoni is a golden jellyfish subspecies and has no sting. It is found only in the 400m-long lake on Eil Malk island, part of the Koror State Rock Island Southern Lagoon, a UNESCO World Heritage Site.

The jellyfish enjoy a symbiotic relationship with the lake’s algae, with their movement around the lake stirring the water to provide the algae with sunlight for photosynthesis, and the algae giving the jellyfish energy and nutrients in return.

At its peak in 2005 the lake was estimated to contain 30 million jellyfish, but the following year an El Nino event caused the water to heat up, killing off much of the algae. The population fell but steadied at around 5 million before the jellyfish almost disappeared altogether in 2016.

The lake closure had been initiated by the local community, Chris Lubber of Palau Dive Adventures told CNN.

“The elders wanted the lake closed to allow it time to recover… technically, the government never officially closed it. Many responsible tour companies stopped doing tours there, and frankly there were so few jellyfish that it really made no sense to go there.”

A visit to the lake, one of very few such sites in the world open to the public, had long been on the itineraries of scuba divers visiting Palau, even though only snorkelling is permitted.

Below a 2m-thick pink layer of bacteria starting at a depth of 13m there is no light or oxygen – only toxic dissolved hydrogen sulfide gas extending to the bottom of the 30m-deep lake.