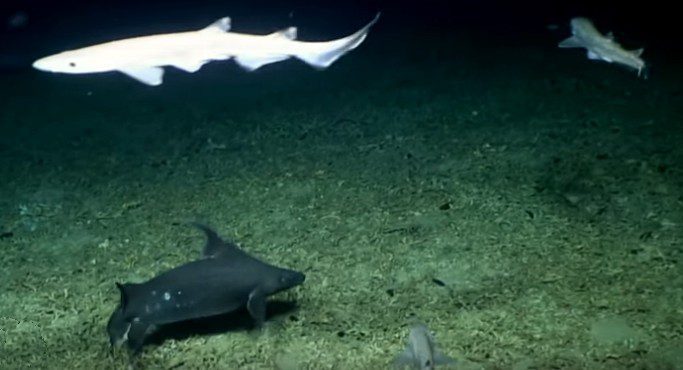 The area was filmed by the ROV Holland 1, deployed from the research vessel ILV Granuaile during a SeaRover survey by Ireland’s Marine Institute in July, but the discovery has only just been announced.

Large concentrations of egg-cases, known as “mermaids’ purses” and suggesting that the area is an assembly point for female sharks, were filmed on the seabed as deep as 750m.

The presence of a large school of blackmouth cat sharks (Galeus melastomus), a species abundant in the north-east Atlantic, suggested that the eggs were of this species, though one individual of a more unusual and solitary species, the sailfin rough shark (Oxynotus paradoxus), was also observed.

The sailfin roughshark, IUCN-listed as Near Threatened, can grow to 1.2m long. It was thought that the individual observed might have been feeding on the eggs.

“No pups were obvious at the site and it is believed that the adult sharks might be utilising degraded coral reef and exposed carbonate rock on which to lay their eggs,” said David O’Sullivan, Chief Scientist on the SeaRover survey. “A healthy coral reef in the vicinity may act as a refuge for the juvenile shark pups once they hatch.”

He said that further study of the site “will answer some important scientific questions on the biology and ecology of deepwater sharks in Irish waters.”

The shark nursery lies within one of six offshore Special Areas of Conservation (SACs) in Irish waters, designated under the EU Habitats Directive for Annex 1 reefs.

The SACs host a diverse range of marine animals including seafans, sponges, worms, starfish, crustaceans and various fish, and many of these species were seen in the area. The exploration was jointly funded by the Irish Government and the EU’s European Maritime & Fisheries Fund.