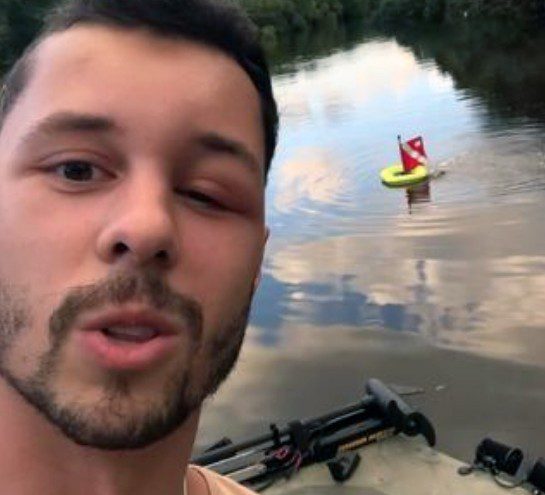 Back at the scene: Jeffrey Heim.

A US diver has blamed himself after an alligator bite left him with a fractured skull.

Jeffrey Heim, a 25-year-old fitness instructor from Tampa, was looking for fossilised megalodon shark teeth for use as jewellery. He was freediving in the Myakka River near Venice on Florida’s Gulf Coast on 30 May.

Soon after entering the water, Heim surfaced and “I thought I’d got hit by a propeller – it hit me so fast. It felt like a boat going 50mph,” he told ABC Action News. “I realised I was inside its mouth, and if the alligator hadn’t decided to let me go on its own, there was nothing I could have done to fight it.

“Because of the bite force on those animals, he could have got me anywhere else and I would have died.”

Bystanders alerted the emergency services and an ambulance took Heim to Sarasota Memorial Hospital, where he was found to have a minor skull fracture and given 34 stitches. Discharged the following day, he has since been back to the dive-site, hoping that his GoPro showing footage of the attack might be recovered.

Florida Fish & Wildlife later removed a 2m alligator from the same stretch of river, with Heim urging that it be kept alive. “It was most likely just a mother following her instincts… a female protecting her eggs,” he said.

He admitted that with years of scuba and freediving experience he should have known better than to dive during alligator mating season. In May and June they tend to be more active and aggressive.

An anti-shark-finning and sustainable-fishing activist, Heim owns a company called SHRKco, dedicated to turning prehistoric shark teeth into jewellery, with 10% of proceeds donated to marine-conservation charities.

With the tagline “Help Extinct Sharks Save Live Sharks”, he hopes to turn the project into a full-time occupation.