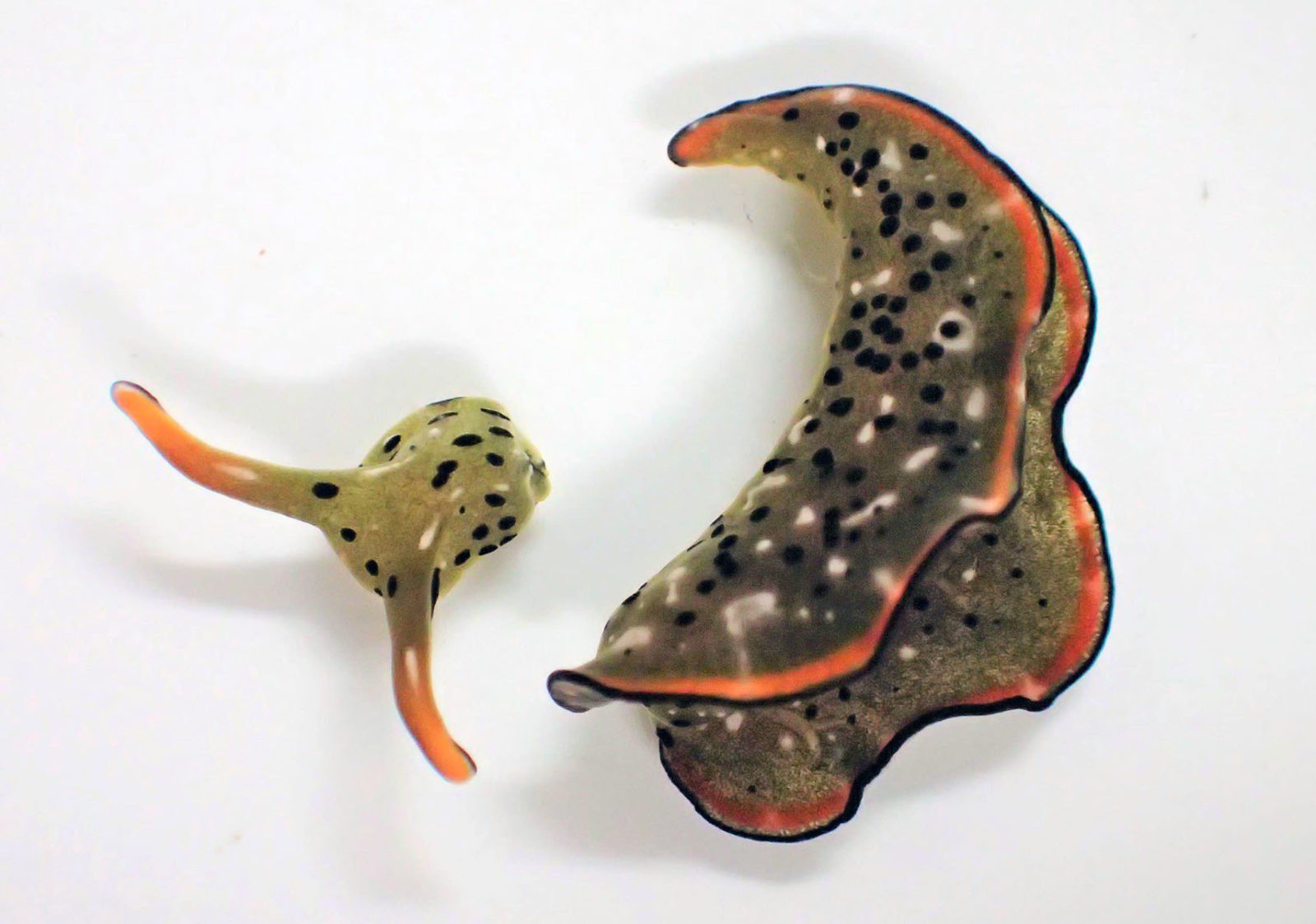 Head and body of Elysia marginata a day after autotomy. (Picture: Sayaka Mitoh)

In what is described as the most extreme example of autonomy and regeneration ever seen in nature, at least two species of sea slug commonly seen by scuba divers in the Indo-Pacific region deliberately detach their own heads from their bodies – and then grow replica bodies.

The heads can survive independently for weeks, because the slugs are capable of kleptoplasty, the ability to steal parts of a cell that allow the algae they eat to photosynthesise. They use this ability routinely when food is scarce, but when they need to regenerate it gives them the energy to initiate the process, although they do have to resume eating algae within days of autonomy.

What’s more, the decapitated body can survive too, for months at a time, although it doesn’t appear capable of growing a new head.

It is even thought that individual slugs, which grow to around 8cm, can regenerate in this way up to twice in their lifetimes.

It seems that only younger slugs are capable of autonomy and regeneration. Although older ones can survive as heads alone for up to 10 days, they don’t resume feeding or start to build a new body, possibly because once past reproductive age there is no evolutionary advantage.

The regenerating molluscs could be mistaken by divers for nudibranchs but are in fact sacoglossan sea-slugs from the plakobranchidae family.

In most known cases of animal regeneration, such as with starfish and lizards, lost body parts such as arms, legs or tails are replaced by regrowing identical parts. The difference with sacoglossan sea-slugs is that they are growing an entire new body from scratch.

The discovery was made by a team from Nara Women’s University in Japan, led by doctoral student Sayaka Mitoh. In 2018 she spotted the detached head of an Elysia marginata slug circling its own body in a laboratory tank and observed it, expecting it to die.

Instead, she saw the wound at the back of its head quickly heal and start to be replaced by a new body. Within days she could see a new heart beating, and 80% of the body, a perfect replica of the old one including all vital organs, had developed within three weeks.

Mitoh later found that another species of sacoglossan sea-slug, Elysia atroviridis, behaved in the same way. She now wants to find out not only how the sea slugs disconnect their heads from their bodies and grow new ones, but why.

The leading theory is that it is an effective way of removing internal parasites. In the laboratory all the slugs that disconnected from their old bodies had parasites, while the new bodies were parasite-free.

Another possibility is that it could be a way of surviving attacks by predators. Stem cells are suspected to play a part in the regeneration process.

The team will also now look for other sacoglossan species that might be able to regenerate. Their study is published in the journal Current Biology.