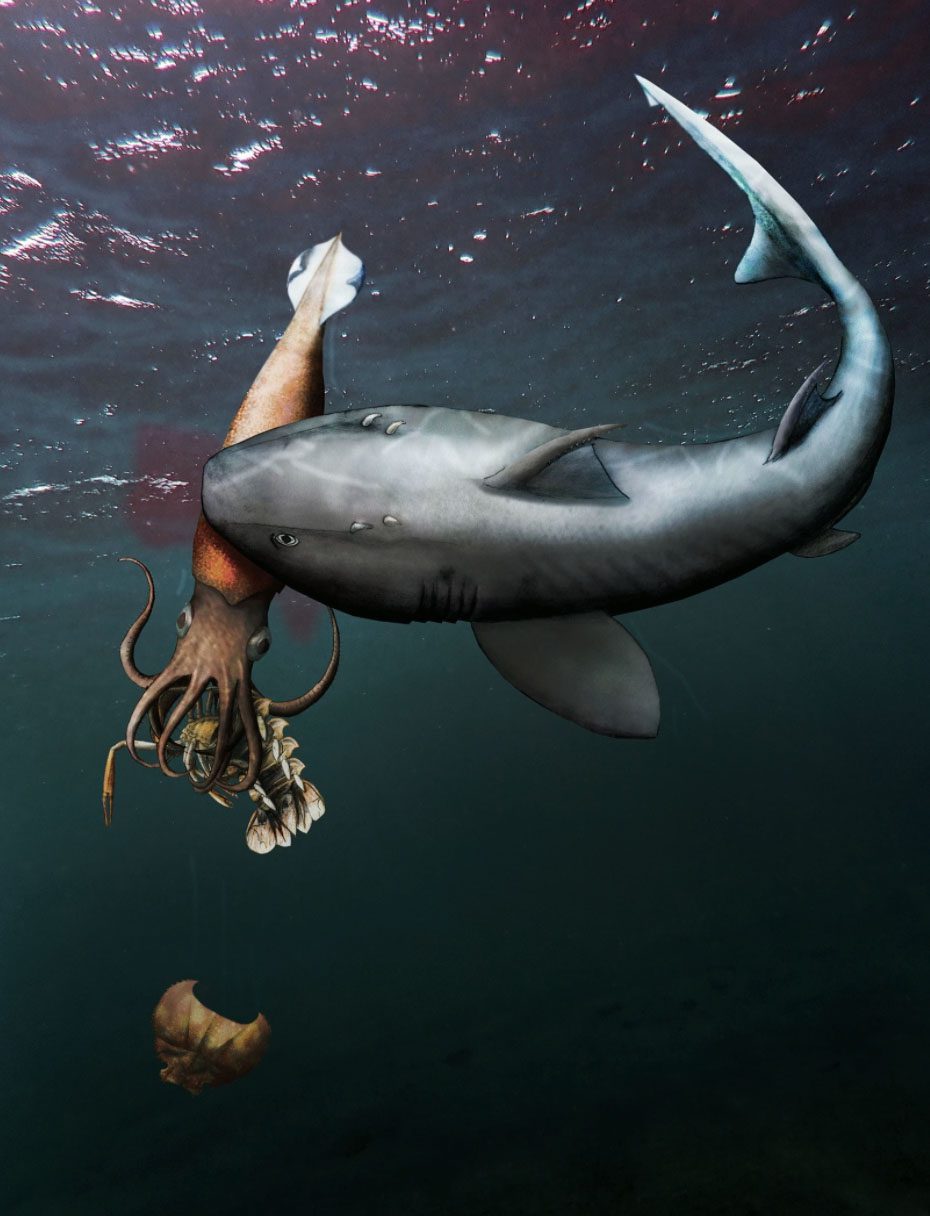 Two stories of marine-life behaviour surviving across millions of years have surfaced in recent scientific studies.

In a dramatic example of prehistoric interaction, a 180-million-year-old compound fossil has revealed a death-struggle between three marine species – in a case of the biter bit.

An early Jurassic squid known as a belemnite had been chewing on a lobster-like crustacean when a shark, crocodile or other large predator took a bite out of the squid. The scene has been reanimated following discovery of the creatures’ fossilised remains in a German quarry.

Cephalopod beaks were difficult to digest, so ancient predators tended to target a squid’s soft parts, and the belemnite was left with only its rostrum and arms. The researchers suggest that the predator was likely to have been the extinct shark Hybodus hauffianus, as illustrated above.

The squid and lobster remains would have fallen to what was then seabed together, presumably in an area where scavengers were scarce. A study by a team led by Christian Klug of Zurich’s Palaeontological Institute & Museum is published in the Swiss Journal of Palaeontology.

******  MEANWHILE, IT WAS KNOWN from fossilised remains that prehistoric crinoids and corals once enjoyed a symbiotic relationship – until 273 million years ago, when the species involved vanished from the fossil record.

However, it now seems that cohabitating crinoids and corals continued to thrive all along through the aeons – hidden on deep seabeds.

Scientists recently found rare Abyssoanthus hexacorals and Metridioidea anemones growing from the stems of Metacrinus rotundus crinoids, also known as Japanese water lilies. This symbiotic relationship occurred at sub-100m depths in the Pacific, off Honshu and Shikoku in Japan.

In the Palaeozoic era corals would climb crinoid stems to filter-feed in the stronger currents clear of the seabed – though what the crinoid gained from the relationship remains unclear.

A research team led by paleontologist Mikołaj Zapalski of Poland’s University of Warsaw used stereoscopic microscopy and microtomography to study the specimens. They concluded that because the corals did not climb above the crinoids’ feeding fans they didn’t compete for food or affect the stems’ flexibility.

Palaeozoic crinoids were linked with corals that had a calcite skeleton, but fossils of non-skeletal corals like those found off Japan are rare – which the researchers believe could explain the gap in the fossil record.

Their study is published in Palaeogeography, Palaaeoclimatology, Palaeoecology.